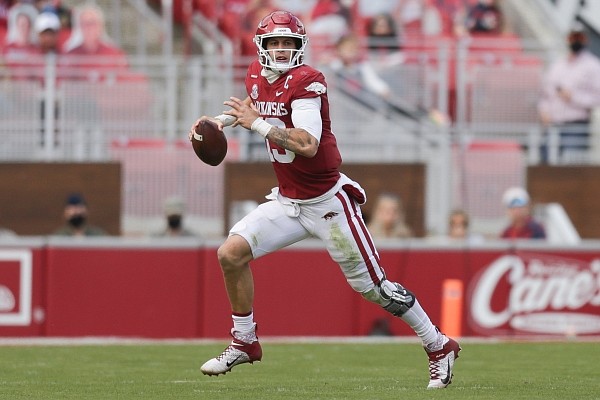 Arkansas quarterback Feleipe Franks (13) looks to pass, Saturday, October 17, 2020 during the second quarter of a football game at Donald W. Reynolds Razorback Stadium in Fayetteville. Check out nwaonline.com/201018Daily/ for the photo gallery.

Below is an analysis of quarterback Feleipe Franks' fourth start with the Razorbacks after a re-watch of the Ole Miss game:

Best throw: Completed pass to Tyson Morris 16 yards downfield for a first down on third-and-12. The 17-yard gain helped set up kicker A.J. Reed’s 32-yard field goal to put Arkansas ahead 20-0 with less than two minutes to play in the first half.

Worst throw: Incomplete pass to Rakeem Boyd 16 yards downfield on a wheel route. The ball was thrown into double coverage and should have been intercepted. It was Franks’ first interceptable pass since Week 1 against Georgia, a span of 62 pass attempts.

Analysis: Following a very precise and efficient performance at Auburn in Week 3, many expected another big day from Feleipe Franks against a poor Ole Miss defense. Things didn't quite work out that way. He completed 21 of 34 passes for 244 yards, one touchdown and his third interception of the season. Franks was up and down in this one, to say the least, but there was one constant for him in the passing game: Treylon Burks.

Franks was solid on his short throws against the Rebels, hitting 14 of 17 within five yards of the line of scrimmage. The three incompletions there included one inaccurate pass, one throwaway and one drop. Where he struggled a bit was on throws 6-10 yards at depth. Franks locked in on Mike Woods on an 8-yard throw to the Ole Miss sideline, leading to a pass breakup, and he also tallied an inaccurate ball to Tyson Morris and the interception when targeting De'Vion Warren on a slant. Yes, Warren should have probably come down with that ball, but it was a touch high for the 5-10 receiver.

From the final series of the first half until the start of the Razorbacks' last scoring drive, Franks struggled. In that span, he was 3 of 10 with four inaccurate passes – three in a row to end the half – and the interception. And something Franks simply has to get better at is understanding when to throw the ball away. Holding the ball too long (a little over five seconds by my count) led to his fumble near the Rebels sideline, as well as some hits Arkansas' staff would like to eliminate.

Still, we saw Franks show some resiliency late. On Arkansas' final three series he completed 6 of 8 passes, and one incompletion was Rakeem Boyd's drop. The ball to Burks in the end zone was put in a place only he could get it. That was very well done. There is plenty to work on during the bye week ahead of Texas A&M, but I expect Kendal Briles to have Franks looking and feeling confident next Saturday.