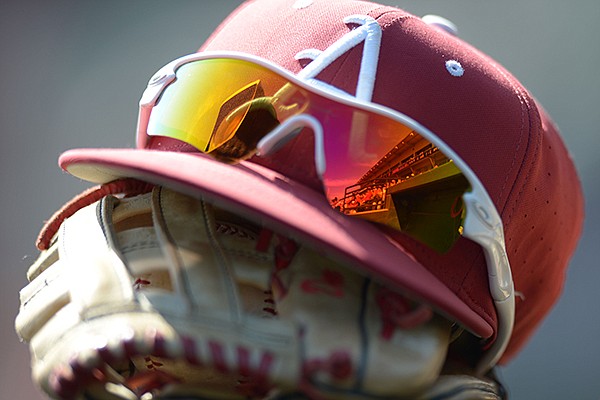 Cobb, a freshman from Texarkana, Texas, who was playing as a designated hitter, helped his Red team to a 9-7 win over the Black squad in seven innings at Baum-Walker Stadium. The teams are scheduled to scrimmage again Wednesday.

Cobb walked to lead off the sixth inning, advanced to second base on a bunt single by Robert Moore, and scored on Cullen Smith’s RBI single to break a 7-7 tie. Moore also scored in the inning on Braydon Webb’s fielder’s choice.

The Red team rallied from a five-run deficit to take a 2-1 series lead. Cobb, Moore and Zack Gregory all homered during a six-run third inning to put the Red team ahead 7-6.

The rally began against Black team starter Will McEntire, who allowed 5 runs on 5 hits in 2-plus innings. Gregory’s two-run home run came against Gabriel Starks.

The Black team tied the game 7-7 on Cayden Wallace’s solo home run against pitcher Mark Adamiak in the top of the fourth inning. Wallace, Gregory and Moore hit their second home runs of the series.

Zebulon Vermillion struggled in his start for the Red team. The redshirt junior allowed 6 runs on 4 hits and 5 walks in 2-plus innings.

The Black team scored five runs against Vermillion in the second inning when Ethan Bates, Jacob Nesbit and Charlie Welch walked with no outs. Clayton Gray, Christian Franklin and Wallace had RBI hits in the inning, and Matt Goodheart had a sacrifice fly RBI.

Cason Tollett walked against Vermillion to lead off the third inning and scored on Nesbit’s one-out double to put the Black team ahead 6-1.

The Black bats were silenced after Wallace’s fourth-inning home run. Peyton Pallette struck out two batters and didn’t allow a base runner in two innings, and Ryan Costeiu worked around a Wallace walk and Bates single in the seventh.

Wallace, a freshman third baseman from Greenbrier, is 6-for-9 with 3 walks and 7 RBI in the series.