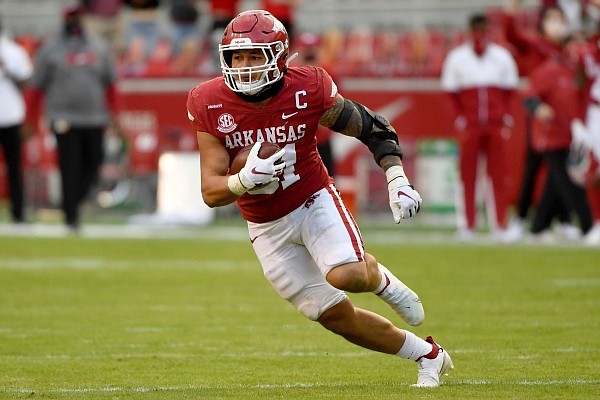 Arkansas linebacker Grant Morgan (31) returns an interception for a touchdown against Mississippi during the second half of an NCAA college football game Saturday, Oct. 17, 2020, in Fayetteville, Ark. (AP Photo/Michael Woods)

FAYETTEVILLE — For the second time in four weeks, a pair of Arkansas defensive players have been recognized by the SEC following a Razorbacks win.

Morgan, a former walk-on from Greenwood, was named SEC defensive player of the week. He finished the 33-21 win over Ole Miss with a career-high 19 tackles, two pass breakups and a 23-yard interception return for a touchdown in the fourth quarter.

Battling an injured left arm, Morgan was the recipient Saturday of the Crip Hall Award, given annually to the most outstanding senior on Homecoming. He leads the Razorbacks with 52 tackles and has now recorded 10-plus tackles in three of four games this season.

“It's going to have to take a lot (to take me out of the game),” Morgan said Saturday. “I love playing football. I love being a Razorback. I love going out there and getting wins like that. That's what it's meant for, just to be able to play through pain.

Clark, a walk-on defensive back from Highland Park in Dallas, was named SEC freshman of the week after a breakout three-interception showing against the Rebels. He is the first Arkansas freshman with three picks in a game.

The only other Razorbacks freshman with a multi-interception game is Kenoy Kennedy.

Monday morning, Arkansas coach Sam Pittman said on SEC Network that the walk-on will be placed on scholarship in January. Through three games this season, Clark has 14 tackles and is tied for the national lead in interceptions.