Accolades roll in for 2 Razorbacks 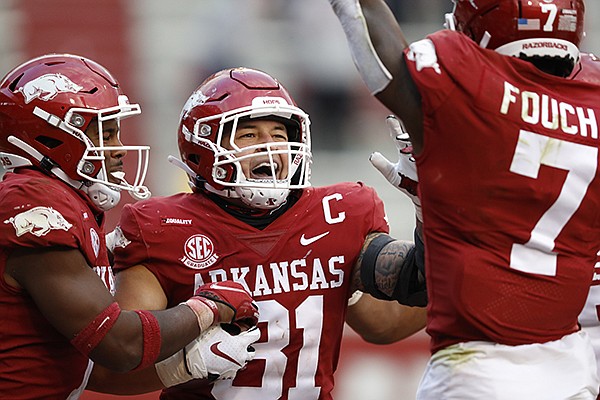 Arkansas linebacker Grant Morgan (31) celebrates after returning an interception for a touchdown during a game against Ole Miss on Saturday, Oct. 17, 2020, in Fayetteville.

FAYETTEVILLE — The positive returns from a win over Ole Miss were flowing Monday for the University of Arkansas defense and its Saturday standouts.

Linebacker Grant Morgan and cornerback Hudson Clark both picked up SEC player of the week awards, the SEC office announced, two days after the Razorbacks’ seven-takeaway performance sparked a 33-21 victory over the high-powered Rebels.

Morgan, a senior from Greenwood, was named co-SEC defensive player of the week along with South Carolina cornerback Jaycee Horn. Clark, a walk-on from Dallas, earned SEC freshman of the week honors.

Morgan had a career-high 19 tackles, 3 tackles for loss, a sack, 2 pass breakups and the game-sealing interception return for a touchdown. The NCAA leader with 13 tackles per game, he was ranked by ESPN analyst Kirk Herbstreit at No. 3 on his list of top 7 college players in Week 7 on Monday.

Clark had a weekend he’ll remember the rest of his life. After intercepting three Matt Corral passes, he found out Sunday night from Coach Sam Pittman he would be receiving a scholarship, then pulled down the SEC honor Monday.

Clark was ranked by ProFootballFocus as the No. 5 cornerback in college football this season.

Pittman broke the news on the scholarship offer to Clark on his Monday morning appearance on “SEC This Morning” in a conversation with Justin Moore, the country singer and Razorback fan from Poyen.

Clark, a redshirt freshman, earned playing time in training camp through his dedication in the film room and on the practice field, and he got his big opportunity due to junior cornerback Montaric Brown’s injury in a 21-14 victory at No. 16 Mississippi State in Week 2.

Clark was asked Saturday about Arkansas leading the country with 10 interceptions, and he threw out credit to position coach Sam Carter and his teammates.

“I think it just comes from starting in the winter,” Clark said. “We got up early every day and went through the workouts. We trusted each other to … pick each other up when we fell down.

“With the picks, we work ball drills every day. Coach Carter makes a big deal about if we get hands on it, we’ve got to get it. We have a little saying, ‘Overthrows, we’ve got to have those.’ We have that ingrained in our mind.”

Clark played well in relief of Brown in Starkville, Miss., then started the past two games. He picked off a deep Corral pass intended for Elijah Moore around midfield early in the second period. Clark jumped an out route for tight end Dontario Drummond in the third quarter, then logged his final interception on a deep ball in the fourth quarter that he returned 18 yards to clinch the win.

He and teammate Jalen Catalon came off the field counting to three with their fingers, indicating the number of interceptions Clark posted.

The freshman safety Catalon, sophomore nickel back Greg Brooks Jr. and Morgan secured the Razorbacks’ three other interceptions against Corral.

Catalon’s takeaway resulted in a 35-yard pick-six that gave Arkansas a 17-0 lead in the second quarter. Brooks’ pick loomed large because it came near the goal line on the first snap after Ole Miss recovered a Feleipe Franks fumble at the Arkansas 17 in the third quarter.

Then there was Morgan’s well-timed interception. With 3:46 remaining, the Rebels took possession at their own 17 trailing 26-21, setting the stage for a potential game-winning touchdown drive.

Morgan had other ideas. He dropped into zone coverage over the middle, read Corral’s eyes and snared a pass intended for Moore at the 23. Morgan showed considerable open-field skills, charging through blocks by Brooks and Simeon Blair, side-stepping a leg swipe from Corral and dropping tight end Kenny Yeboah on his rear with a juke at the 5 to finish off the return for a touchdown that set the final score of 33-21 with 3:07 remaining.

The Razorbacks (2-2) are garnering headlines around the SEC for their scrappy attitude and quick return to respectability under Pittman and his staff.

Pittman admitted Saturday night that when Athletic Director Hunter Yurachek informed him the Razorbacks had been assigned extra games against top 10 Georgia and Florida this summer to fill out their 10-game All-SEC schedule, he was “down,” but only for a few seconds.

“Look, there’s not really any pressure on us,” Pittman said. “The expectations weren’t high outside the building. But in the athletic department and in our locker room, they’re as high as they possibly can be.

Arkansas has an open date this Saturday before traveling to face No. 7 Texas A&M on Oct. 31. The Halloween night game will be the Razorbacks’ fourth game against a top 16 opponent in the first half of their schedule. They have games in the second half of the year against current No. 2 Alabama and No. 10 Florida.