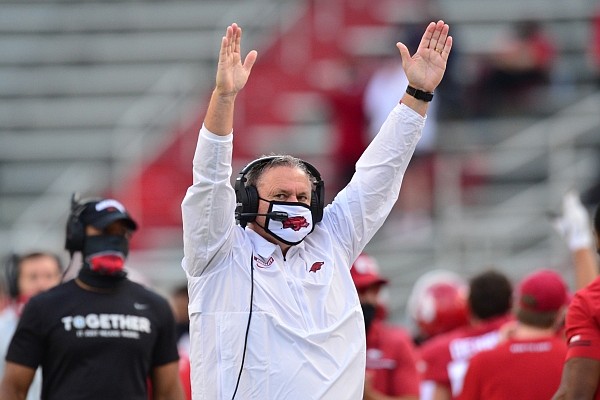 It was a bit of a crazy weekend in the SEC.

South Carolina beat Auburn for the first time in 87 years

Kentucky beat Tennessee for the first time in Knoxville since 1984.

And the Arkansas Razorbacks beat Ole Miss, and in the process won an SEC home game for the first time in what seemed like forever.

The once forlorn and forgotten Hogs are 2-2 in SEC play and tied for third in the SEC West. Everyone is patting Athletic Director Hunter Yurachek and his search committee of Jon Fagg and Steve Cox on the back for pulling off the miracle hire of Sam Pittman.

Pittman's agent, Judy Henry, and a bunch of former Razorback players are getting much deserved kudos, too.

Yurachek made the final call, but it was a team effort, much like the way the Razorbacks are playing and why they have been able to become the state champions of Mississippi.

Pittman didn't come to Arkansas with a bag full of fairy dust that he spread around to make players walk taller, run faster and hit harder.

He came in with a career full of knowledge about players and the game of football.

The first thing Pittman and his staff did was work on changing attitudes and the environment.

Last season, and probably the one before, there was a lack of discipline that became more apparent every week. Yurachek, who did not hire Chad Morris, did meet with Morris on numerous occasions to discuss leadership.

Morris is truly a nice guy with a great offensive mind -- but not a great quarterback at Auburn -- but his idea of getting respect from the players was to buy a Corvette. Guess that was supposed to make the players think he was the kind of coach who could connect with them.

Morris also played favorites. A player he recruited had a better shot at gaining playing time than one whom he inherited.

Plus, he couldn't make up his mind about who was the best quarterback, and they weren't the two transfers he recruited.

If yours truly was in a position to give this year's quarterback, Feleipe Franks, some advice, it would be this: In the final home game when the seniors come out to be honored, join them.

Not that Franks isn't already showing leadership, because he is, but it didn't sit well last season when Ben Hicks didn't come out with his senior teammates.

Pittman knows about leadership, and he also knew how to put together a great staff.

Barry Odom was an outstanding defensive coordinator before being hired as head coach at Missouri during a controversial time.

There was no luck involved in any of the turnovers. Every one of them happened because a Razorback was in the right place at the right time.

Odom is getting a lot of well-deserved credit, and he's quick to share it with the other assistants.

This is an SEC defensive staff. Offense, too.

Arkansas is struggling with its running game, but the offensive line features two seniors and a whole mess of underclassmen who are getting better.

Another noticeable improvement in the offense is the receivers. There is a reason Justin Stepp was kept from last year's staff, just ask receivers Treylon Burks and De'Vion Warren.

The biggest difference in last season and this season is attitudes.

These players would run into a burning house for Pittman if he asked, because they trust he won't ask them to do something they can't do.

The Razorbacks might win enough games to get to a bowl, and they may not. But what everyone has seen is exactly what they hoped for: improvement.