Jalen Battles earning his spot up the middle 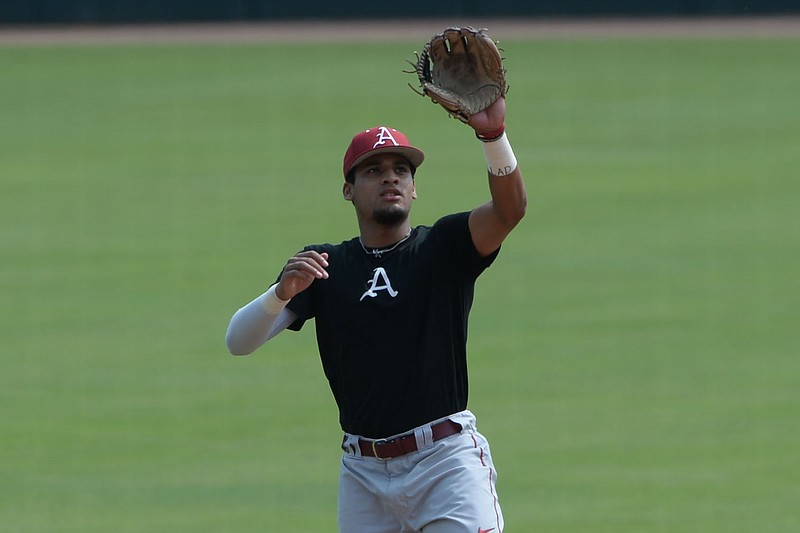 FAYETTEVILLE — It's not often fans get to hear the immediate reaction of a coach during practice, but that's what happened Wednesday.

With two outs and nobody on in the bottom of the fourth inning, Arkansas shortstop Jalen Battles hit a home run to left-center field to tie Game 4 of the Razorbacks’ fall series at 1-1.

Arkansas coach Dave Van Horn was wearing a microphone during the SEC Network-Plus broadcast at the time and liked what he saw.

"Battles got rewarded for getting out in front of that breaking ball," Van Horn said. "The last time he was up he crushed a ball to center field and the wind pushed it down."

Battles finished Wednesday 2-for-3 with a home run, a single and both RBI for the Black team, which defeated the Red team 2-1 in seven innings to even the best-of-seven series at two games apiece.

The teams are scheduled to play Game 5 on Thursday at 3 p.m. on SEC Network-Plus.

Battles, a sophomore from San Antonio, played last year at McLennan (Texas) Community College, the same junior college Van Horn played at in the early 1980s before transferring to the Razorbacks. Battles chose Arkansas because it "felt like home,” and because his coach at McLennan, Mitch Thompson, was the brother of Razorback hitting coach Nate Thompson.

"We didn't think he was going to make it to school," Van Horn said. "He was having a pretty good year at McLennan. He's turned down some money a couple of times and I think if you ask him, he is so happy he's here. He tells me every day he loves it here."

Baseball America rates Battles the 131st-best prospect for the 2021 MLB Draft. He was also considered a strong prospect this year when the draft was cut to five rounds.

"Once we found out it was a shortened draft, I decided just to come to Arkansas," Battles said. "Coming here, I was going to get better. I already know that and I feel like I’m going to do well here, so I’ll improve my draft stock."

Battles has started at shortstop every game for the Black team during the scrimmages, and is trying to earn a starting spot in the middle infield alongside returning second baseman Robert Moore. Moore has also practiced some at shortstop this fall.

"I would say probably having Robert at second makes us a better team just because he turns the double play so well," Van Horn said before the scrimmages started. "Jalen is mostly a shortstop, really tall and lanky. Although he can play a really good second."

"It’s very competitive between Robert and I. Whatever position I play, I’ll be OK with it," Battles said. “I know with us up the middle, it’s very special. We already have team chemistry. It’s going to be big."

"He's a guy that we signed him, when he walked out of my office I remember I told one of the coaches, 'Physically, that's what they look like right there'," Van Horn said on the broadcast. "What I meant was that looks like a big-league shortstop."

On Wednesday, Battles was able to break open a pitchers’ duel at Baum-Walker Stadium. Red team starting pitcher, Blake Adams had dealt 3 2/3 scoreless innings before giving up the home run to Battles in the fourth.

Battles' home run tied the game after the Red team was able to scratch across a run without a hit in the top of the fourth. Matt Goodheart drew a one-out walk, advanced on a walk and a wild pitch, and scored on a groundout from Casey Opitz.

That was the only score allowed by freshman right hander Jaxon Wiggins, who allowed 1 hit, walked 3 and struck out 4 batters in 3 1/3 innings.

The score remained 1-1 until the sixth inning. Battles squared around to bunt on the first pitch from Evan Gray, but pulled the bat back to take a strike.

With second baseman Michael Brooks holding Cayden Wallace at second base, Battles took advantage of a big hole on the right side of the infield and hit a 2-1 pitch the opposite way. Wallace, who walked with one out, scored the go-ahead run from second.

Van Horn said he can see a difference in Battles’ approach at the plate after working with Nate Thompson this fall.

"I think Coach Thompson has really done a good job with him," Van Horn said. "He's starting to lift the ball and hit home runs. His exit velocity this fall — day in and day out, practice and in games — has been as good as anybody."

"(His) bat speed is unreal, so he catches up to a lot of things," Adams said. "It’s hard getting him off-balance. He gets me almost every time. He’s a great player and he’s going to play a big role for our team."

Freshman right hander Nate Wohlgemuth earned the win for the Black team with a scoreless sixth inning that included strikeouts of Moore and Cullen Smith. The inning ended when Braydon Webb was thrown out trying to steal second base after a two-out single. Battles applied the tag on the throw from transfer catcher Charlie Welch.

Elijah Trest was credited with a save with a perfect seventh inning. He was backed up by terrific defensive plays from left fielder Bryce Matthews and second baseman Ethan Bates.

Matthews robbed Goodheart of a leadoff home run, and Bates made a fully extended catch falling down to end the scrimmage on an Opitz line drive.