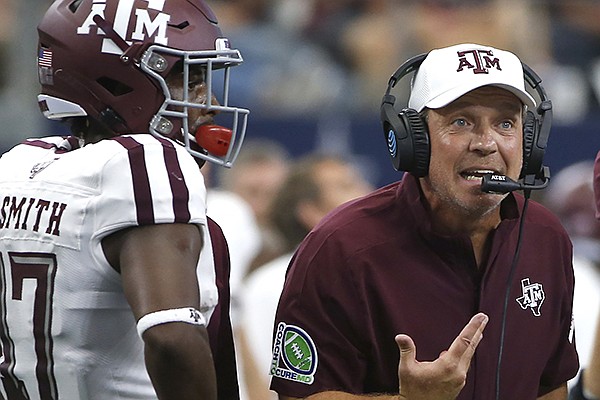 After four games in 2019, the Arkansas Razorbacks were 2-2, but the wins were over Portland State by a touchdown and Colorado State.

These Hogs obviously should be 3-1 as they use their open week to prepare for Texas A&M, which is 3-1 with its only loss to Alabama.

There seems to be a new hope and optimism among the Razorbacks Nation, and there should be, but keep in mind the Aggies will have a home-field advantage.

Judging from what was seen on TV, the lower bowl was spaced except for where the apparently invincible cadets sit. The upper deck looked pretty crowded in College Station.

It appeared to be 50% capacity or more.

Arkansas hasn’t beaten the Aggies since 2011 when Bobby Petrino was the head coach.

The Aggies have a signature win this season over Florida.

Still, what a a difference a new coach can make.

Sam Pittman is giving his players a couple of days off this weekend.

The last thing any of them need to do — and no doubt they’ve been warned numerous times already this week — is go into an environment that increases their likelihood of catching the virus.

So far, the entire team has done an outstanding job of living as much in a bubble as possible and limiting contact with those who may not be as careful as they are.

While it is human nature to want to have the full college experience, it is critical for the Razorbacks to keep in mind there are only six games remaining this season.

They haven’t crossed the finish line in protecting themselves, their teammates and the coaches from the virus.

These guys have earned a couple of days off, and many of them need it to get over some nicks and bruises, but being smart and accountable should be at the top of their list.

It used to be an old joke about Louisiana politics. The motto was, “Vote early and vote often.”

Who would have ever thought that might actually be a problem in America?

With the coronavirus and concern of Russian influence on the election, it doesn’t seem to be much of a joke anymore.

On Friday, it was written in this space the belief that Nick Saban would not be kept off the sideline for the showdown between his Alabama Crimson Tide and Georgia.

He tested positive Oct. 14, but the next three tests were negative for the virus, and he was on the sideline for the win.

Meanwhile, up north, former LSU coach Les Miles had been declared virus free and cleared to travel with his Kansas team to West Virginia.

He declined and stayed home.

No one knows whether he was missed: The Jayhawks lost their fourth straight game, and third by at least three touchdowns.

The Jayhawks travel to Manhattan, Kan., to take on rival Kansas State on Saturday. It is presumed he will make the trip.

Speaking of the Wildcats, since losing their season opener to Arkansas State University 35-31, they have won three in a row by beating Oklahoma, Texas Tech and TCU.

LSU Coach Ed Orgeron has a book coming out titled “Flipping the Script.”

It is based on the Tigers’ undefeated title season last year, not what has happened to the 1-2 Tigers this season.