Off and running: 2-2 start no surprise to Hogs 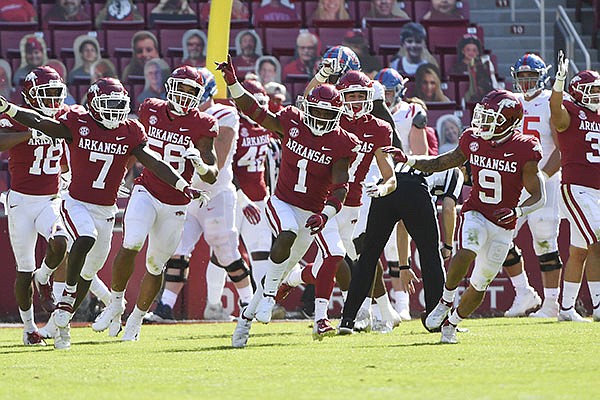 FAYETTEVILLE — As the University of Arkansas capped off its 33-21 win over Ole Miss on Saturday, ESPN analyst Rod Gilmore gave voice to what many around the SEC were thinking.

The Razorbacks (2-2) are the “surprise” team in the SEC through four weeks of the season, Gilmore proclaimed.

Considering the betting line in Las Vegas for the number of wins in 2020 for Arkansas was 1.5, the fact the Razorbacks already have pocketed two wins — and are a blown officiating call away from a third at Auburn — lends credence to Gilmore’s remark.

The Razorbacks, under the leadership of first-year Coach Sam Pittman, are energizing their fans, sparking hope for underdogs everywhere and surprising many SEC pundits. The entire ESPN GameDay crew — Lee Corso, Kirk Herbstreit and Desmond Howard — along with guest picker Derrick Henry picked Ole Miss to beat Arkansas on Saturday, as did SEC Network commentators Gene Chizik and Chris Doering.

The Razorbacks, who had gone 2-10 overall and 0-8 in the SEC in both the past two seasons, might have surprised the TV media, but they have not surprised themselves. They felt something good was brewing during preseason practices.

Senior linebacker Hayden Henry, a legacy player from Little Rock, probably captured the mood of the Arkansas fan base when asked about how the program has begun turning in the right direction by snapping their 20-game SEC losing streak, then their 12-game home losing streak in SEC play in a matter of three weeks.

“I just think everyone’s so fed up, you know?” he said. “We’re so tired of being Arkansas: The bottom feeder.

“I think it’s been great getting to win some games to realize that ‘Wow, we have talent on this team,’ and we have guys that can play really well at a high level. It’s just really like some camaraderie on the team. We’ve got guys making a lot of plays. We’re feeding off each other and doing a lot of good things.”

The synergy between Pittman, his coaching staff and the players has been widely acclaimed. Pittman’s “turn on that damn jukebox!” after wins has turned into a meme. The department’s social media team has earned praise for ginning up positive publicity with short videos and photo-shopped content.

The team’s veterans are glad to see their years of work producing positives and creating excitement for the program.

“Growing up here in Fayetteville and then playing here the past couple of years, going through the struggles the team went through, it’s so exciting, especially for my class,” senior guard Ty Clary said. “I mean, some of the guys I came in with, Shane Clenin, [Dalton] Wagner, everybody’s so happy with the wins we’ve already gotten. But now it’s like, ‘We have to get more.’ You want more. No one’s satisfied.”

Redshirt freshman Jalen Catalon, a big contributor to the defensive progress, has seen only one year of the struggles in person. He was asked about the difference between last year’s 2-10 campaign, which ended with nine consecutive losses, and this year’s 2-2 start.

“I will have to say overall just the demeanor of the team,” Catalon said. “I think last year there wasn’t a lot, or enough, confidence in our ability.

“I think this year we have a lot more confidence on what we can do, and we trust each other. We’ve had a mentality of ‘I’ve got your back, and you’ve got my back’ on both offense and defense. I think that’s showing. We trust the coaches, and we trust the game plan we have.”

Linebacker Grant Morgan, a Greenwood native and a legacy who began his career as a walk-on, understands what the early season surge has meant to the fan base.

“Anytime we’re able to get a win, especially after the past couple of years how we’ve been struggling, it’s big for our team,” Morgan said Saturday. “It’s big for the players to be able to have some success now.

“We’ve been down in the dumps the last couple of years and being able to fight through those things and now we’re tougher together now. We’re as close as can be so I know the fans are seeing how happy we are too and I know they’re happy.”

The Razorbacks don’t have flashy statistics on either side of the ball — ranking 46th in total defense and 63rd in total offense among the 77 FBS teams that have played — except in a few categories.

Arkansas leads the country with 10 interceptions, is tied for second in total takeaways (13) and is seventh with a plus-6 turnover margin.

Pittman has been answering questions about the Razorbacks’ quick turnaround for the past three weeks. He was asked on Wednesday’s SEC teleconference whether he’s surprised the team could jell this quickly and start winning games.

“I thought we had a good group of kids, and I thought that they would jell together as a family,” Pittman said. “I did believe that. You know we’re not a big team, so I knew that we could have problems injury-wise and things of that nature because we’re not near as big as some of the other teams we’re playing.

“But I liked the attitude of our kids, the work ethic of our kids since Day One that we came in here. And obviously if you’re bought in together and you work hard and you’re willing to be a good teammate, you have a good chance to get better. And how much better, I don’t know the answer to that, but you do have a chance of getting better. And I felt like we would do that.”

The Razorbacks have indeed suffered injuries and lost playing time at virtually every position group on the roster other than quarterback. They have an open date this week to prepare for a road date at No. 7 Texas A&M on Oct. 31.

“We have six games left, and Texas A&M is an outstanding football team, so well coached,” Pittman said. “We’re looking forward to the game, obviously, but we’re using this week to get healthy.”

Pittman appeared on ESPN with Scott Van Pelt and has done a swath of radio and TV appearances as the leader of one of the darlings of college football this season.