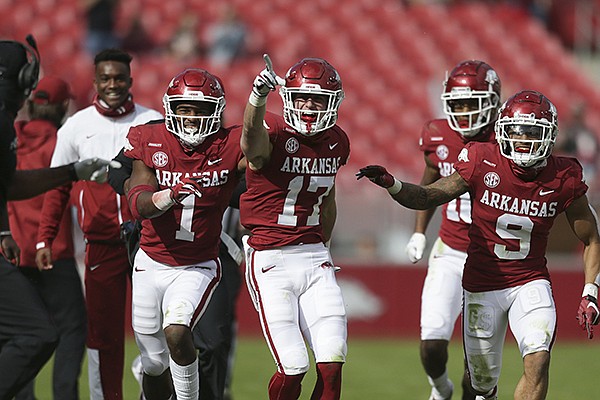 Arkansas defensive backs Hudson Clark (17), Jalen Catalon (1) and Greg Brooks (9) celebrate after Clark intercepted a pass during a game against Ole Miss on Saturday, Oct. 17, 2020, in Fayetteville. All three players had at least one interception and the Razorbacks intercepted six passes in their 33-21 victory over the Rebels.

A walk-on defensive back from Dallas, Clark was named the Jim Thorpe Award player of the week Thursday following his three-interception performance in the Razorbacks’ 33-21 win over Ole Miss.

Clark, who made his second career start against the Rebels, is the only freshman in program history to record three interceptions in a game. He is the first SEC freshman to do so since Mississippi State’s Darren Williams in 2003.

Clark is tied for the national lead in interceptions and the sole leader among freshmen.

He was named SEC freshman of the week on Monday and placed on the Football Writers Association of America’s freshman All-America watch list. Pro Football Focus also recognized him as one of its most valuable players of the week alongside Clemson quarterback Trevor Lawrence.

Clark has recorded 14 tackles this season, including 12 in Arkansas’ last two games. He finished with a career-high seven unassisted tackles at Auburn.

Razorbacks coach Sam Pittman announced Monday on SEC Network that Clark would be placed on scholarship in January.