Lockhart, Opitz stand out in Game 5 of Hogs' fall series 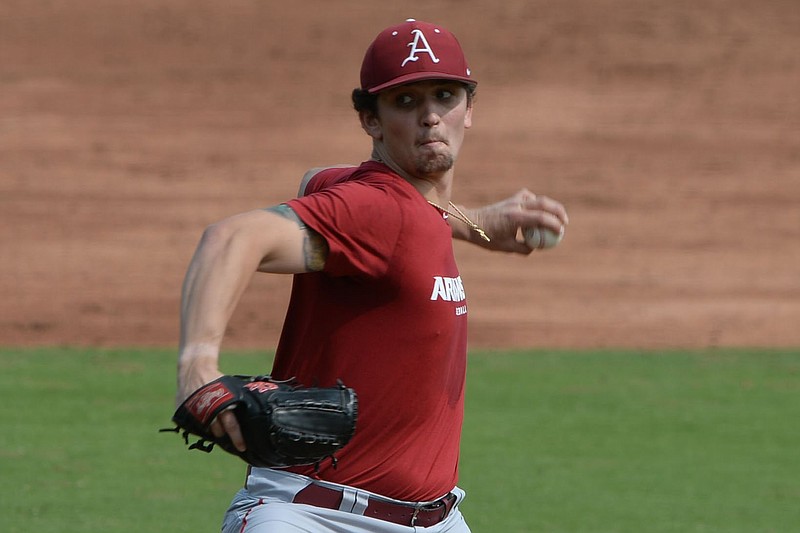 FAYETTEVILLE — With spring sports players gaining an extra year of eligibility due the shortened 2020 season, Arkansas' roster is filled with underclassmen.

Forty-two of Arkansas' 51 roster spots are filled with freshmen or sophomores — including redshirts — but it was the upperclassmen who led the Red team to a 4-2 victory Thursday in seven innings in Game 5 of the Razorbacks' Fall Series.

With the scored tied 1-1, junior Casey Opitz stepped into the left-handed batters box and knocked a pitch against the Razorback bullpen down the left field line. Brady Slavens, who had reached on a strikeout, scored from first and gave the Red team a 2-1 advantage.

Two batters later freshman outfielder Zac White hit a ball over the Arkansas bullpen to give the Red team a 4-1 advantage.

The tone was set early for the Red team by left-handed pitcher Lael Lockhart, a graduate transfer from Houston. Lockhart pitched four scoreless innings in the start and gave up three hits and a walk, and struck out two.

"Got lucky today," Lockhart said after the game. "I felt like everything was kind of on for the most part. I mean just went out there with a plan to just kind of fill it up."

Lockhart's pitching coach Matt Hobbs said on the SEC Network-Plus broadcast that he has a true four-pitch mix.

"(He's) Using a bigger breaking ball today and you know he's got a cutter that he can also throw and the changeup is well above average," Hobbs said. "He throws a one-seam fastball. So it's kind of interesting the way that it moves, and how he throws it actually harder than his four-seam fastball. But he's a true mix."

Lockhart's story behind his one-seam fastball is as unusual as the story of how he ended up on the mound.

"He came back from a little arm issue at Houston and couldn't find a two-seam fastball that worked for him," Hobbs said. "I wish I could take credit for it, but I can't. But it's an interesting pitch. The crazy thing is usually when you get two-seam fastballs they're going to be different in velocity and his is not. His is a little bit harder."

Lockhart transferred to Arkansas after getting an extra year of eligibility due to the pandemic. He came to the Cougars as a two-way player and began his college career in the field.

"My freshman year I got there our pitching staff was loaded at the time so we put it on the back burner," he said. "And hitting just worked out because I didn’t want to use a redshirt or anything like that."

Lockhart appeared in 56 games as a freshman and started 52. After his sophomore season he was named to the All-American Athletic Conference team on the second team as a utility player, but during that season things started to change.

"My sophomore year (I) came in out of the pen a little bit," he said. "Enjoyed it. Loved pitching again and my junior year it just kind of all lined up to where I think I started on a Sunday and then worked my way into the Friday role and it kind of all went from there."

Lockhart finished his junior and senior season as the Friday night starter for Houston. Now that Lockhart is in Fayetteville, Opitz enjoys having an experienced presence on the mound.

"Well, Lockhart, obviously he’s been through it," Opitz said. "He just knows how to attack guys. He knows how his stuff works better against a righty versus a lefty or if a changeup is going to get a guy. He can tell if a guy takes a swing on one of his pitches, was he on it or he really wasn’t? Do we go back to it?

"Freshmen don’t really know that quite yet because they kind of have a lot going on for them... Lockhart knows exactly what he wants to do and how he wants to attack certain guys."

While Lockhart was locked in, he did need some help from his friends in the field. He walked catcher Charlie Welch to lead off the top of the third inning, and Clayton Gray singled to put runners and first and second with one out.

Christian Franklin singled up the middle, but Welch was thrown out at the plate by a charging Braydon Webb in center field.

"At first I thought it was going to get cut off," Lockhart said. "And I’m just kind of sitting back there barking for it to come through, and to watch it from behind the plate is kind of a really gorgeous thing to watch."

After the outfield assist Lockhart struck out Matt Goodheart looking to end the inning.

Game 5 was Lockhart's first start in the series, but not his first appearance. He pitched 1 1/3 scoreless innings in Game 1 and allowed one hit and one walk.

The Red team scored the first run of the game in the fourth inning on a throwing error by Black team shortstop Jalen Battles.

That was the only run until the Black team evened things up in the top of the sixth with a Cayden Wallace single down the right field line that scored Franklin.

The Red team scored three runs in the bottom of the inning. Right hander Peyton Pallette, who came into the game in the top of the sixth, finished the game out for the Red team.

Battles scored in the top of the seventh off a Ethan Bates single to right, but Pallette got the next two batters to pop up to end the game.

Game 6 between the teams is scheduled to begin Saturday at 1 p.m.