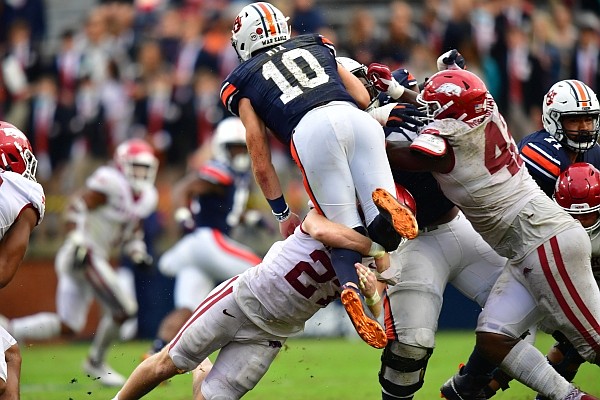 Far from it, actually.

Henry, a senior from Little Rock, has put together arguably his most complete performances of the season in the Razorbacks’ last two games against Auburn and Ole Miss. In that stretch, he has recorded 12 tackles, including three for lost yardage.

In the 33-21 win over the Rebels in Week 4, he matched a career-high in tackles (8) and flashed with energy and physicality.

"We kid back and forth, but he's played really well.”

Pushed into a starting role with junior linebacker Bumper Pool out because of an injury, Henry filled in well alongside captain Grant Morgan against Ole Miss. He finished with a team-high six unassisted tackles and was credited with a pass breakup in the second quarter.

Henry believes he has upped his level of play recently, but also added that he left quite a few plays on the field Saturday.

“I think I could’ve played better,” Henry said Tuesday. “But I think I played good — good enough to win, obviously. And it’s nice to see that the habits that I’m having in practice are paying off and I’m playing good in games and tackling well.”

He credited Arkansas’ defensive staff, and specifically linebackers coach Rion Rhoades, for instilling confidence in him when it comes to the game plan and understanding opponents’ schemes.

“I feel like I know what play is coming before the ball is even snapped, so it’s really nice,” Henry added. “I definitely love sitting in the meeting room with (Rhoades). Really funny and really, really smart. He understands the game of football really well, and he coaches us really hard. I mean, he’s a really hard coach.

“He’s not going to let us mess up on a play and not rip us for it, that’s for sure. We know he’s going to make sure that we’re making every play and playing the best we can. I think he’s great about helping us with the game plan, learning what we’re going to get that week. And I think he’s done a phenomenal job. I really enjoy playing for him.”

Both of Henry’s tackles for loss came on Rebels run plays, stuffing tailback Snoop Connor one and two yards behind the line of scrimmage in the first half. And the previous week, he flew in on a third-down play and upended Tigers quarterback Bo Nix for a sack.

Auburn was forced to punt, and Arkansas scored on the ensuing drive to trim its deficit to 20-18 in the third quarter. His playmaking of late has been a welcomed sight for the Razorbacks’ defense and for Pittman.

Quality depth at the second level was a bit of a concern for the head coach in the preseason.

“Honestly, (Henry’s play) has given me more confidence in that group of linebackers,” Pittman said. “I thought he played a really good game against Ole Miss. ... He was awesome. He was great."