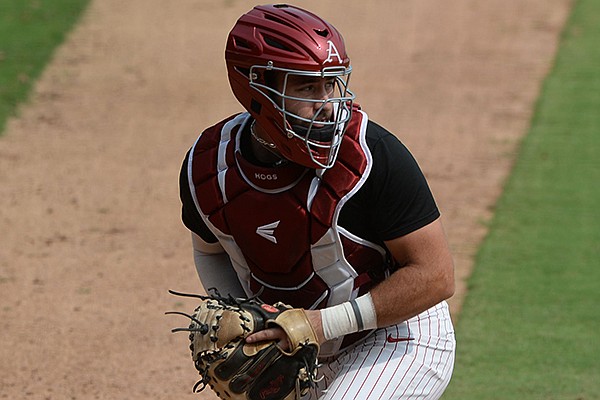 Arkansas catcher Casey Opitz fields a throw from the outfield Friday, Sept. 18, 2020, during practice at Baum-Walker Stadium in Fayetteville.

FAYETTEVILLE — Catcher Casey Opitz didn’t expect to be back at the University of Arkansas going through fall practice for a fourth time.

The expectation for Opitz was that he would be picked in last summer’s Major League Baseball Draft, sign for a nice bonus and begin his professional career.

But 2020 hasn’t been what anyone expected because of the coronavirus pandemic that shut down sports last spring and affected many other aspects of normal life.

“Obviously, it’s something we’ve never been through before as a country and as a baseball program,” Opitz said. “It’s just kind of a weird year.”

The draft was shortened from 40 to five rounds and Opitz wasn’t selected, though he indicated he could have been picked by agreeing to a signing bonus offered by some teams.

“We were kind of waiting for the name to be called or waiting for a call,” Opitz said. “Certain calls came and numbers popped up, and I just didn’t feel it was worth taking that money and not coming back here for what I was getting offered.

“We won’t go into the numbers, but I love this town so much. I love this place. I love this team. I couldn’t say ‘no’ to them when I could come back here. If my pro career has to wait a year for us to win a national championship, then I’m more than happy to do so.”

The NCAA granted athletes in spring sports an extra year of eligibility, so Opitz again is a junior after the Razorbacks played 16 games in 2020 before the rest of the season was canceled.

“It’s tough to see such a good player [not be drafted], and such a good person as well,” Arkansas second-year freshman pitcher Peyton Pallette said. “But I think he’s handled it very well and come back with a great attitude, motivating everybody on the team and pushing everybody to their limits.”

Opitz went into last season rated as the “Best Catcher Arm” by MLB scouts, according to Baseball America magazine. He was ranked fifth among catchers in D1 Baseball’s preseason position power rankings.

When Opitz took over as a starter in 2019, he threw out 22 of 46 attempted base stealers and batted .243 with 3 home runs. He had timely hits to finish with 33 RBI and showed good plate discipline with 38 walks.

“Obviously, Optiz is as good as it gets in the country,” Arkansas Coach Dave Van Horn said. “He’s a man among boys right now. The guy is just a great baseball player.”

Van Horn said it’s a credit to Opitz how he has handled returning to Arkansas.

Opitz batted .350 (7 for 20) in the Razorbacks’ intrasquad World Series and drove in five runs to help his Red team beat the Black team 4 games to 2. He was 3 for 4 with 2 RBI Saturday when the Red team won 7-0 to clinch the series.

“He pretty much got a gut punch when he didn’t get drafted in the first five rounds,” Van Horn said. “I felt horrible for him. I told him we were all mixed emotions. We wanted him back, but we wanted for him personally to have that opportunity to sign.”

“I mean, it’s awesome,” Lockhart said of Opitz’s ability to frame pitches. “You get about three more inches everywhere around the plate, and I can’t ask for too much more, that’s for sure.”

Optiz also is a natural team leader, both because of the position he plays and his personality.

“Leadership-wise it really gives a lift to our locker room and our play on the field,” infielder Robert Moore, a second-year freshman, said of Opitz’s return. “I think we almost took for granted the leadership that Casey brings to us and I honestly can’t imagine being here without him, because every day I’ve been here, he’s been here.

“Casey really brings guys under his wing and he’s always wanting to learn. Just the humbleness and no ego that goes with him, there’s a lot to learn leadership skill-wise from Casey Opitz.”

Lockhart said the respect Opitz’s teammates have for him is obvious.

“He’s been in all the big spots. He knows all of the roles,” Lockhart said. “He knows what it’s going to take to get this team to Omaha [for the College World Series] and win a national championship. So you just kind of follow his footsteps and you’re on a good path.”

Opitz said he’s thankful returning to Arkansas was an option when he wasn’t drafted. Undrafted free agents were limited to a signing bonus of $20,000.

“This isn’t how I thought it would end up, but I was in a different situation than a lot of the guys that decided to not come back for another year,” Opitz said. “You can’t say ‘no’ to this place. I’ve said ‘yes’ to it twice now.

“I just love it here. This being a second option for me, it’s incredible to be back here with these guys and this coaching staff, and just this community. It’s unbelievable. I didn’t mess up my choice, for sure.”

Ideally for Opitz and the Razorbacks, he’ll have a big season, help Arkansas to a third consecutive College World Series appearance and then be a high pick in the 2021 draft.

“We just hope there’s a season and he’s a high, high pick,” Van Horn said. “He can lead us to something special in ‘21 because he’s definitely our leader on the field and in that locker room.

“I think everyone sees it and knows it, but I love his attitude. He has been good. He could have come back in here and been, ‘Poor ol’ me, I shouldn’t be here.’

“He hasn’t been that way at all. Great to see same ol’ Casey.”