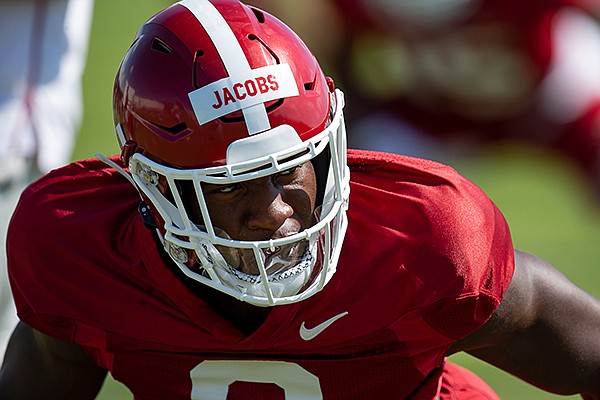 Arkansas defensive back Jerry Jacobs is shown during practice Friday, Aug. 21, 2020, in Fayetteville.

FAYETTEVILLE — Cornerback Jerry Jacobs, a senior graduate transfer, has opted out of the rest of the season and is no longer on the team, University of Arkansas Coach Sam Pittman announced Monday.

The decision came soon after Jacobs posted a short statement that read “Pray for better days” on his Twitter account.

Later, Jacobs announced his intentions, writing, “First and foremost, I would like to thank Coach Pittman and the entire coaching staff for giving me this opportunity. I also want to thank my teammates and the amazing Arkansas fans for welcoming me in with open arms.

“After much prayer and discussion with my family, I’ve decided that it is best for me to opt out of my final year and declare for the NFL draft. I have worked long and hard for the opportunity to play in the NFL and believe this is the right time to pursue this goal. I’m humbled and excited to attack this next challenge.”

Jacobs transferred from Arkansas State over the summer after rehabbing from surgery to repair the anterior cruciate ligament in his right knee.

The 5-11, 203-pounder from Atlanta started the first three games this season before freshman Khari Johnson earned a starting job in that spot for Arkansas’ 33-21 win over Ole Miss on Oct. 17.

Jacobs registered 17 tackles, all of them solo, to rank seventh on the team through four games. Due to the coronavirus pandemic, the NCAA has granted extra years of eligibility this season, so Jacobs will have one more full season of NCAA eligibility remaining.

The redshirt junior from Little Rock and son of former NFL great Keith Jackson had not played this season. The surgery was performed on the opposite knee he had operated on in 2017.

“He’s going to be fine,” Pittman said. “It is a season-ending surgery, but he’s fine. He’s doing well, so we’re happy with that.”

Jackson has four career receptions for 51 yards, including a touchdown last year at Ole Miss, in his 14 career games.

The Razorbacks’ home game against Tennessee on Nov. 7 was assigned one of two kickoff times and broadcast arrangements by the SEC office on Monday.

The first meeting between the Razorbacks (2-2) and Volunteers (2-3) in Fayetteville since 2011 will kick off at either 6 p.m. or 6:30 p.m. and will be broadcast on either ESPN or the SEC Network.

The Volunteers, losers of three straight games, are in the midst of an open date prior to traveling to Arkansas. They will be the second consecutive SEC opponent the Razorbacks will face that is coming off an open date.

Coach Sam Pittman and his wife Jamie traveled to Hot Springs on Friday and Saturday for some alone time at Lake Hamilton before returning to Fayetteville on Sunday.

“We’ve got a place down there, and so I’m going to take Jamie,” Pittman said last week. “We’re going to go down there and have some fun, get out on the boat some probably [Friday], watch football on Saturday and come back Sunday morning.”

Earlier last week, Pittman was asked on 103.7 The Buzz in Little Rock whether he knew where the skinny-dipping cove was located at Lake Hamilton, touching off some funny exchanges.

“You know, I’m just not sure that would be a positive look for the state of Arkansas, and I mean the entire state of Arkansas,” Pittman cracked when asked about skinny dipping. “If I’m a representative, hmm, wouldn’t be too good.”

Former Arkansas defensive coordinator John Chavis, who assisted with a junior high team in eastern Tennessee this season, told the Knoxville Quarterback Club on Monday he’d like to coach another four or five years, according to Jimmy Hyams of WNML radio.

Chavis had praise for the current Arkansas staff and made an admission that hurt him to say, Hyams reported via Twitter. Chavis told the club the Arkansas staff “made the talent better,” but he added “we underachieved as a defensive unit … and I don’t like saying that,” Hyams wrote.

Later, he said, “Tennessee is more talented than Arkansas” as a preview of the Volunteers next game on Nov. 7 in Fayetteville. But he added, “Those kids at Arkansas believe in what they’re doing now and that goes a long way,” according to Hyams.

Sophomore receiver Trey Knox is not contributing at the same level he did through four games last season.

The 6-5, 207-pounder from Murfreesboro, Tenn., ranks eighth on the roster with four catches for 33 yards. Knox dropped a two-point conversion pass at Auburn and could not bring in another pass that hit his hands that day. He also did not have a catch in either of the past two games.

“We’ve got a wide receiver room that’s very competitive in there,” Coach Sam Pittman said Thursday, adding that Knox is not hurt and “is doing really well.”

Pittman added, “Whatever reps he’s getting is where he is on the depth chart at this point and time.”

Knox is listed behind junior Mike Woods on the depth chart for Saturday’s game at Texas A&M.

Woods said Knox was a “little down” after the Auburn game.

“I pulled him to the side and talked to him,” said Woods, adding he told Knox, “You just have to come out and have a good week of practice bro, because if you practice hard in practice you show them that you can execute that in the week, and it’s just going to build your confidence throughout the week.”

The forecast five days out from the Arkansas-Texas A&M game offers a significant change from the dark skies, cold and rain that have been draped over Northwest Arkansas for several days.

The temperature is expected to be in the mid-60s for the 6:30 p.m. kickoff at Kyle Field after a projected overnight low of 46 degrees and a sunny day with clear skies and a high of 69 in College Station, Texas.