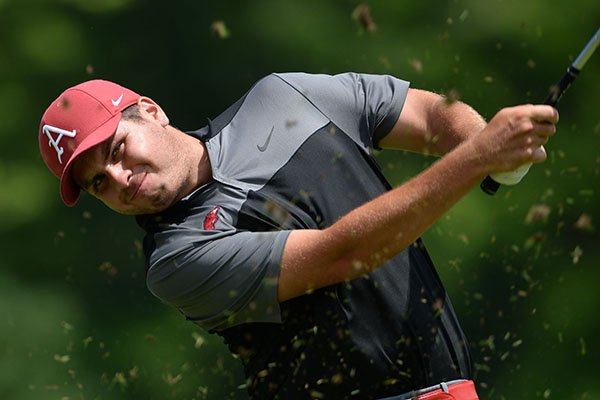 The University of Arkansas fell back four spots to sixth place while Julian Perico remained tied for the lead after two rounds of the Vanderbilt Legends Collegiate tournament in Franklin, Tenn.

Perico played the final eight holes at 4-under par on the 7,221-yard layout at the Vanderbilt Legends North Course to shoot a 5-under 66 for the day. The junior from Lima, Peru, is tied with Vanderbilt’s Matthew Riedel atop the leaderboard at 12-under 130 heading into today’s final round.

Arkansas — which was tied for second place with Texas A&M, one stroke behind Vanderbilt, entering round two — fell back after firing a team score of 4-under 280.

Host Vanderbilt stretched its lead to 10 strokes over Texas A&M with a 19-under round Monday, led by Riedel’s 7-under 64, capped by an eagle on No. 18, and John Augenstein’s 65.

The day’s best individual round was played by Texas A&M’s Brandon Smith, who had eight birdies en route to a 63. Smith moved into sole possession of third place, one stroke behind Perico and Riedel and one stroke ahead of the trio of Augenstein, Kentucky’s Alex Goff and his Aggie teammate William Paysse.