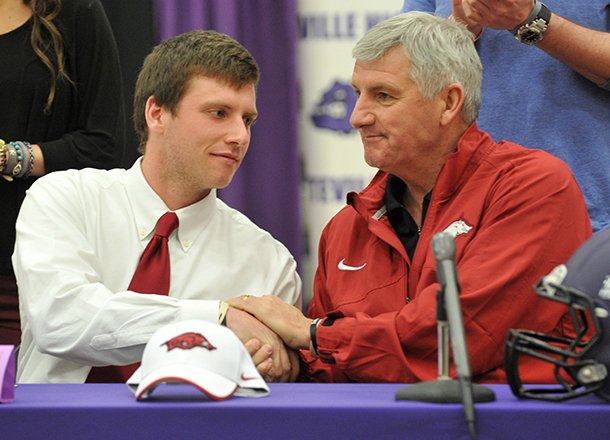 Fayetteville High's Austin Allen shakes hands with his father Bobby Allen after signing his letter of intent to play football at the University of Arkansas during the official signing ceremony Wednesday, Feb. 6, 2013, at Fayetteville High School.

As former coaches, Allen and Cox are well known to Razorbacks fans.

Allen came with Houston Nutt from Boise State to coach every football defensive position plus periodically defensive coordinator, including defensively masterminding the 1999 Razorbacks’ Cotton Bowl conquest of Texas. He coached 1998-2007 under Nutt and continued coaching defense 2008-2011 for Bobby Petrino and 2012 for John L. Smith.

Since 2013, Allen has served in charge of high school and NFL relations, establishing and maintaining relationships with high school coaches and NFL scouts. He also bequeathed Arkansas his two quarterbacking sons, Brandon Allen (2011-2015) and Austin Allen (2013-2017)

Cox then joined the administration as project manager for facilities.

England has been a Razorbacks trainer since the 1970s with a 4-year interruption as trainer in the St. Louis Cardinals organization. He returned in 1984. Another operating even keel regardless whether cast in turbulent times, England was basketball’s head trainer under Eddie Sutton, Nolan Richardson, Stan Heath, John Pelphrey and Mike Anderson.

In 2019 he was named supervisor of all Razorbacks trainers as Director of Sports Medicine.

Most Razorbacks fans buying tickets dealt with Mark Scobey in some fashion since 1977. Scobey started as assistant ticket manager. In 1983 he became the longtime ticket manager. He finishes working in guest services.

Terry Mercer, Clarinda Carr and Mary Lynn Gibson, their bosses will vouch, are more vital to operating their offices than any above their pay grade.

Mercer loyally and expertly serves administrating everything from the basketball office to camps for all men’s basketball coaches from Eddie Sutton through Eric Musselman.

Gibson runs the office for every sports information director from Rick Schaeffer in the 1980s through Kyle Parkinson currently.

Carr and Gibson deserve an extra equivalent of combat pay. For during those 2008-11 that former Athletic Director Jeff Long and Petrino together seemed deliberately destroying 50 years of goodwill that Frank Broyles built with the Arkansas public and press, the courtesy exhibited by them along with associate athletic director Kevin Trainor salvaged many relationships re-nurtured.

Seven retire from the Razorbacks with their vast competence invaluably surpassed by their kindness always serving Arkansas well.