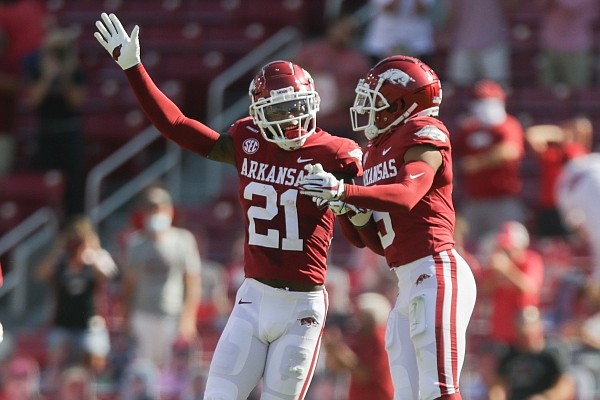 Arkansas defensive back Montaric Brown (21) reacts after intercepting the ball on Saturday, September 26, 2020 during the first half of a football game at Donald W. Reynolds Razorback Stadium in Fayetteville. Check out nwaonline.com/200927Daily/ for the photo gallery.

FAYETTEVILLE — Arkansas’ defense was a battered and bruised unit entering its first open date of the season, but the Razorbacks are making headway on the injury front ahead of Saturday.

Arkansas coach Sam Pittman said Wednesday on the SEC coaches teleconference that cornerback Montaric Brown is cleared to play against No. 8 Texas A&M. He suffered an undisclosed upper-body injury in the first half of the Razorbacks’ win at Mississippi State on Oct. 3 and has missed the team’s last two games.

Brown, a native of Ashdown, has six tackles, a pass breakup and one interception this season. His first career interception came against the Aggies in 2019.

Junior linebacker Bumper Pool, who did not play in the 33-21 win against Ole Miss, has practiced this week, Pittman noted. Pool is tied for 11th in the SEC with 36 tackles and leads the Razorbacks with four pass breakups.

Grant Morgan, Arkansas' leading tackler, has worn a brace on his injured left arm since the Mississippi State game, but he is healthy entering the weekend.

"I feel good," Morgan said Tuesday. "This is the best I've felt. I've gotten better and better over the weeks."

Defensive end Dorian Gerald’s status remains up in the air, but Pittman added that he has practiced with the team this week. Gerald injured his ankle in the season opener against Georgia and exited the game after recording four tackles and 1.5 sacks.

“I don’t know if Dorian will be able to play or not,” Pittman said. “We’ll see as the week continues.”

In regards to covid-19 and players returning to campus off the bye week, Pittman said the Razorbacks “came out fine” in testing on Sunday.

“We choose to trust our team. We did not put any restrictions on them,” he added. “But you’re always concerned, whether it’s time off or not, about covid. You’re always stressed out about the test coming in, to be honest with you — at least I am.