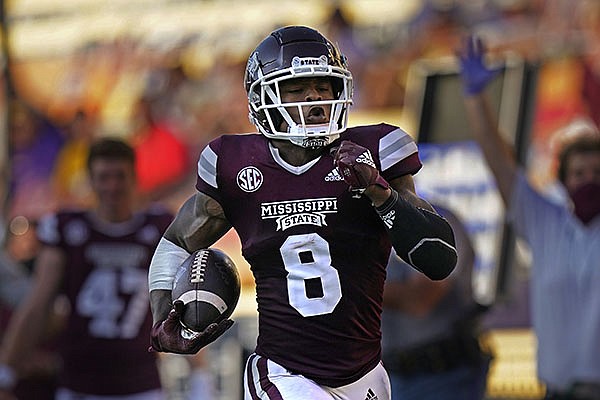 FAYETTEVILLE — Mike Leach and Kylin Hill couldn’t make it work between them.

Mississippi State’s first-year coach known for his passing offense and the Bulldogs’ All-SEC senior running back have parted ways.

AL.com was the first outlet to break the news that Hill was opting out of the rest of the season after four games to get ready for the NFL Draft.

Leach confirmed the news — in his own odd way — Wednesday on the SEC coaches teleconference.

Instead of clearly stating Hill no longer is on the team, Leach made it sound like he gets his news about a star player from reading it on the internet.

“I haven’t talked to Kylin,” Leach said. “From what I’ve heard, he’s opted out to prepare for the NFL. We wish him the best. We’re going to focus on the guys that are on the team.”

With Leach, the former Texas Tech and Washington State coach, taking over at Mississippi State, it figured that Hill wasn’t going to rush 242 times for 1,350 yards as he did last season.

But when Hill caught 8 passes for 158 yards – including a 75-yard touchdown play – and rushed 7 times for 34 yards in the Bulldogs’ 44-34 victory over defending national champion LSU to open the season, it looked like he would still be highly productive in a pass-oriented offense.

Hill got just one touch the next game — a carry for 7 yards — before suffering an injury in Arkansas’ 21-14 victory at Mississippi State.

When Kentucky beat the Bulldogs 24-2 — marking the first time a Leach-coached team had failed to score on offense — Hill was held to 17 yards on 7 carries, but he had 15 catches for 79 yards.

Hill then didn’t play in Mississippi State’s 28-14 loss to Texas A&M. Sports Illustrated reported he was suspended for “an outburst” after the Kentucky game, citing sources.

Leach said Wednesday that wide receiver Tyrell Shavers and defensive ends Tre Lawson and Jamari Stewart also have left the program, raising the total to eight players who have decided to quit this season.

“I’d be surprised if we don’t lose more. If you’re stunned or nervous, I mean, you better brace yourself because we might lose more.”

Tennessee has an open date this week before playing at Arkansas on Nov. 7.

“We’ve had two really good practices this week, which has been really good for us,” Vols Coach Jeremy Pruitt said Wednesday. “An opportunity to kind of go back to a fall camp mode. Get lots of reps with lots of guys.

“I feel like our guys have really had good attitudes and worked hard in practice, and we’ve got to continue to do that throughout the course of the year.”

Pruitt said the Vols are doing some work on Arkansas this week.

“Each day we’ll add in a couple of periods of working on Arkansas and prepare that way,” he said.

In August, Tennessee had more than 40 players unavailable for practice because they had either tested positive for covid-19 or were in contact tracing, but Pruitt said that hasn’t been a major issue since the season started.

“We’ve been very fortunate — knocking on my desk here — since the games have actually started,” he said. “We’ve done a very nice job with covid. I think we probably learned some lessons back during the summertime when they had a break.”

The SEC fined Ole Miss Coach Lane Kiffin $25,000 not for what he said about officiating, but for what he retweeted.

Kiffin said he didn’t realize he could be fined for retweeting a fan who was critical of SEC officials for not reviewing a kickoff by the Rebels that appeared to be an Auburn fumble that was recovered in the end zone for a touchdown by an Ole Miss player.

“I was very surprised,” Kiffin said Wednesday on the SEC coaches teleconference when asked about the fine. “It was for the retweet, where a fan said something about the officials and I retweeted it. I did not think that was fineable. I think it would be one thing if I tweeted something and wrote stuff on it, so I was surprised when the commissioner [Greg Sankey] called and told me that.

“I did say to him when he was fining me, ‘Well, that’s not real exciting that I didn’t even get to say anything or make a joke.’ I just got fined for a retweet. That’s not really worth it.”

According to an SEC news release, Kiffin was fined for violation of conference bylaw 10.5, which states: “Criticism of officials or the officiating program by institutional personnel is absolutely prohibited.”

Kiffin said he doesn’t believe appealing the fine is an option.

“I think that was asked and the policy is pretty blanketed that basically the commissioner can do whatever he wants,” Kiffin said.

Kiffin did manage to get a joke in when he tweeted that he could pay the fine with 2.5 million pennies.

“So someone had sent me the penny thing,” he said. “I thought it was kind of funny. Maybe that makes the fine more worth it, I guess, if you can make some people laugh.”

Kiffin said carrying all those pennies from Oxford, Miss., to the SEC office in Birmingham, Ala., probably isn’t practical.

“Usually you just write a check to the league office,” he said.

Florida and Vanderbilt, which both had to postpone games because of not having enough players available because of positive covid-19 tests, will play for the first time in three weeks when the No. 10 Gators face Missouri and the Commodores challenge Ole Miss on Saturday.

“I think our guys are glad to get back to playing football. The reality is that nobody wanted to stop, but the availability of players just put us in a position where we had to look at where we were, slow down a little bit and work towards getting back to play.”

Florida shut down its program for two weeks before returning to practice Monday.

“I told everybody I didn’t expect Monday to be this unbelievably sharp practice,” Gators Coach Dan Mullen said. “I just wanted us to have a great attitude and be excited to be out there, and you saw the energy.”

Mullen said the practices have gradually gotten better this week.

“It’s going to be a buildup all the way to Saturday for us,” he said.

Mason said his players have learned not to take anything for granted this season or look too far ahead.

“I think this group knows we’ve just got take it one day at a time, one week at a time,” he said. “We get a chance to go 1-0 this week, so let’s take advantage of that.”

Brennan, a junior, remains doubtful because of a hip injury he suffered at Missouri three weeks ago.

“Myles Brennan has not practiced yet this week,” Orgeron said Wednesday. “I don’t believe that he’s going to play, but things could change toward the end of the week. Right now we’re going with TJ as our first-team quarterback.”

Finley played in his first college game last week and completed 17 of 21 passes for 265 yards and 2 touchdowns with an interception in LSU’s 52-24 victory over South Carolina. Finley, 6-6 and 246 pounds, also rushed 8 times for 24 yards and a touchdown.

“The thing I was most impressed with was TJ’s poise,” Orgeron said. “He looked so calm and made some great decisions.

“TJ’s got a cannon for an arm. He escaped some pressure, which we thought he could because he lost some of the weight. He was 265 when he came here.”

Orgeron said Finley can improve on decisions of where to go with the ball and making calls at the line of scrimmage.

“But that’s going to come with maturity,” Orgeron said. “Now that [offensive coordinator] Steve [Ensminger] knows TJ can take it another step, I think you’ll see a couple of different wrinkles that we didn’t put in the first game just to make sure the game plan was simple for him.”

Yes, the scariest college coach in America — at least if you’re playing against him — was born on Halloween in 1951.

Saturday will be only the second time Saban has coached a Halloween game. His Michigan State Spartans beat Northwestern 29-5 on Oct. 21, 1998.

Marshall has become LSU’s go-to receiver with Ja’Marr Chase’s decision to opt out of his junior season to focus on the NFL Draft.

Auburn’s defense will try to slow down Marshall, who is averaging 128.0 receiving yards per game to lead the SEC. He has 27 catches for 512 yards and 9 touchdowns.

After this season, Marshall looks like he’ll be getting ready for the NFL Draft, too.

It figures to be another slugfest between Auburn and LSU, but for a change, the game doesn’t carry national title implications. For the first time since LSU beat Auburn 31-20 in 2001, neither team is ranked.

Usually both teams are ranked, as was the case in 13 of the past 19 years. But losses for Auburn to Georgia and South Carolina, and for LSU to Mississippi State and Missouri have dropped both Tigers out of The Associated Press poll.

With a combined four losses, Auburn and LSU are realistically out of the SEC West race and playing for pride and better bowl options.

The last four games between the two have been decided by a combined 19 points.

1965 – The model helmets Florida will wear against Missouri to commemorate the Jan. 1, 1966, Sugar Bowl when the Gators played the Tigers. Missouri won 20-18, so maybe the Florida helmets will bring the Tigers some good luck.

“It used to be that good defense beats a good offense. Good defense doesn’t beat good offense anymore. Georgia has as good a defense as we do an offense, and we scored 41 points on them. That’s not the way it used to be. It used to be if you had a good defense, other people weren’t going to score. You were always going to be in the game. I’m telling you, it ain’t that way anymore.”

– Alabama Coach Nick Saban to ESPN on the Crimson Tide’s 41-24 victory over the Bulldogs.

“I had pretty minor symptoms to be perfectly honest, so I feel pretty good. I’ve been able to go out and get in runs in the morning before coming into the office.”

“It might not show on the scoreboard today, but the gap is closing.”

– Tennessee Coach Jeremy Pruitt on Alabama’s 48-17 victory over the Vols that extended the Crimson Tide’s winning streak in the series to 14 games.

“We didn’t match their intensity and they whipped us.”

– Kentucky Coach Mark Stoops on Missouri’s 20-10 victory over the Wildcats.