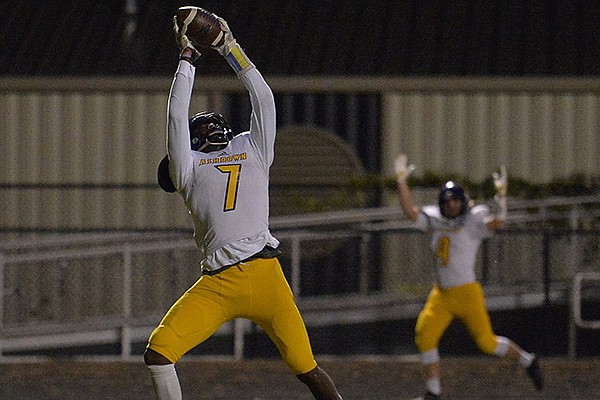 FAYETTEVILLE — There were plenty of Division I prospects involved in Friday night’s Ashdown-Joe T. Robinson Class 4A-7 showdown, and one of the best was also one of the youngest.

Ashdown sophomore tight Shamar Easter (6-5, 210 pounds), who has offers from Arkansas, Kansas and New Mexico, showed off his talent with a 31-yard touchdown catch in the opening quarter of Robinson's 29-21 overtime win over the visiting Panthers.

Easter is one of three 2023 in-state prospects offered by the Razorbacks, along with Jacksonville tailback Darien Bennett (6-0, 215) and El Dorado wide receiver DeAndra Burns (5-10, 160). Easter was named the nation’s eight-best freshman football prospect by College Football Today earlier this year.

“In addition to being a great young football player, he is a great human being,” said Ashdown coach Matt Richardson, a football manager for the Razorbacks in the early 2000s. “A true sign of that is he twisted his ankle last week and I got what seemed about like 50 texts.

“Some of them were from college coaches, but also a lot from parents and teachers and administrators wanting to know, 'Is Shamar OK? How is Shamar?’

“They did that because he is an unbelievable human being. One of the best kids I have ever been around. He has had one 'C' in school his whole life. So his grades are great and just is one of the most amazing kids I have been around in my whole life.

“If you meet him tomorrow he will be smiling and he will leave you smiling when you walk away. He is always smiling and always positive.”

Easter has 21 catches for 443 yards and 8 touchdowns this season for the Panthers (6-3, 3-2). He has also converted three 2-point conversions.

“He has a really, really bright future,” Richardson said. “He is 6-5, 210 pounds and can really run. He is a football star, he is a track star and can just fly around the track. And he is just 15 years old and won’t turn 16 until January. Whatever God wants to do with him, he is going to be blessed.”

Ashdown had a 3-7 season in 2018 and a 2-8 season in 2019 after several years of success under Richardson, who also coached Arkansas defensive backs Montaric Brown and LaDarrius Bishop.

“The kids are playing really well,” Richardson said. “First off, I give all the thanks to Jesus. I’m a 2-8 coach, but I have been praying a lot more these days and its working out. That is the God’s honest truth.

“I tell them all the time that if I say I have to go home to 'this wife I have,' my marriage is not going to work out for me well. But if I there mindset that I get to go home to the 'great wife and greatest kids in the world,' I am going to be a happy husband and a happy father. That’s just a whole different attitude and they are taking it and running with it and I think that has been the difference this year.”

“They are good,” Richardson said of the Senators. “The (Hunter) Smith kid is as good as any running back around. The Withers kid, the Harris kid and Buddy Gaston the quarterback, they are just all great players. And (assistant coach Brian) Maupin and Coach Todd (Eskola) do a great job with them."