How Arkansas and Texas A&M compare at each position 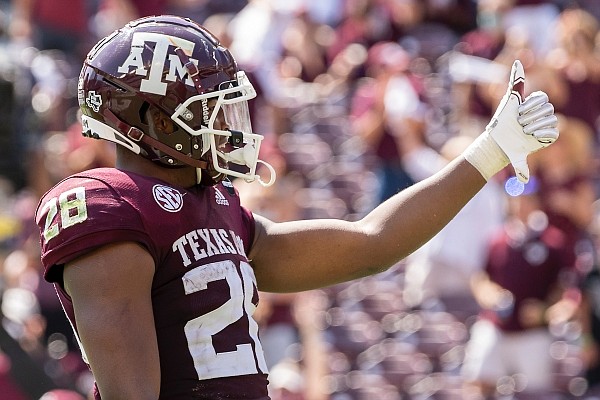 Feleipe Franks (82-128-3, 974 yards, 8 TD, .641 completions) has taken all but one significant snap with the exception of goal-line packages for KJ Jefferson and Malik Hornsby. Franks is 39th in passer efficiency (143.9) and 29th with 243.5 passing ypg. The coaches would like to see quicker decisions from Franks, whether it’s scrambles or throwaways.

The big question for Arkansas nearly halfway through the season is when will Rakeem Boyd (33-88, 1 TD, 2.7 ypc) and the run game be unleashed? His longest carry is 8 yards in 3 games, and the team’s longest is 19 yards by KJ Jefferson. Trelon Smith (56-221, 3.9 ypc) has been a solid backup and has powered for yards between the tackles.

The “Maroon Goons” are one of the most effective fronts in the FBS, having allowed just 2 sacks. Tackles Carson Green and Dan Moore Jr., and guards Kenyon Green and Jared Hocker are all returning starters. Center Ryan McCollum, a reserve in ’19, has 18 career starts. The group averages 6-5, 316 pounds, the kind of size Arkansas Coach Sam Pittman is aiming to reach.

The Hogs have used rotating punters, with Reid Bauer (44.3) coming off a big game backing up George Caratan (45.4). Team is No. 76 in net punting (35.2). Negatives: 2 punt blocks and allowing a 47-yard fake punt. Vito Calvaruso has 8 touchbacks on 17 kickoffs, but has had 2 go out of bounds. Return men De’Vion Warren, Treylon Burks and Nathan Parodi haven’t gotten it going yet.

The bye week should allow key defenders Montaric Brown, Bumper Pool and Dorian Gerald to be healthier and closer to returning. The Razorbacks have had to prepare with silent counts and hand signals for what is likely to be the biggest and loudest crowd they will see. These streak-breaking Hogs could snap an 8-game skid to the Aggies, so that’s big incentive.

The Aggies also had a week to rest up and they’ll have the advantage of what has been the largest allowed crowd in the SEC. After a 52-24 pounding vs. No. 2 Alabama, the Aggies upset No. 4 Florida so they have a backdoor shot at the CFP. Texas A&M is riding an 8-game win streak in the series and crunched the Hogs 58-10 in the last game at Kyle Field in 2012.