Pittman gets team to buy in 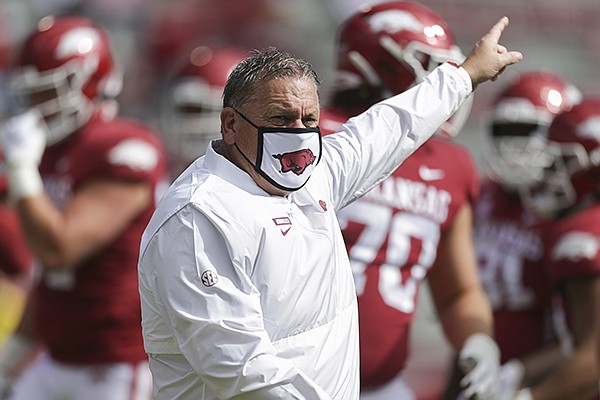 Arkansas coach Sam Pittman is shown prior to a game against Ole Miss on Saturday, Oct. 17, 2020, in Fayetteville.

But the first-year Arkansas coach at 2-2 already with two more SEC successes than the Razorbacks achieved the last two years responds proudly regarding what he and his staff have instilled.

“As far as the players go … we say what we mean,” Pittman said. “We do what we say we’re gonna do. Our kids have gravitated to that. They appreciate honesty. They appreciate discipline. And they appreciate love. We’ve got all three of those things.”

He stresses the collective “we.”

“Let’s face the facts, I have a very, very good coaching staff,” Pittman said. “A good and knowledgeable group of men that teach the game and know how to talk to players. I’ve been very fortunate to have good men.”

“We can’t just turn around say we’re going to bully you into the end zone,” Pittman said Wednesday on his radio show. “We’re not a big, physical team yet to say, ‘We’re going to give it to this guy. What are you going to do about it?’ I think we’ll become that team. They’re a group of guys who work hard, care and are smart, intelligent kids. We just need to continue to work together and I think we will.”

Sixteen who have produced so much for long in so many ways for Razorbacks athletics might still be employed had more than just one other 2016 University of Arkansas Board of Trustees member heeded David Pryor’s wisdom.

Now in deference to safety restrictions caused by the covid-19 pandemic, the UA limits football crowds to 16,500 at its 76,412-seat football stadium. It will cap men’s basketball crowds at 4,000 in 19,000-seat Walton Arena.

The revenue lost, including lopping the four nonconference games off Arkansas’ now 10-game entirely SEC football schedule, compelled the UA athletic department offering early retirement to some of its longest tenured and most valuable employees, lest those employees risk permanent furloughs should the financial hits from covid persist.

This column Wednesday wrote of seven who have helped the program in so many ways. Among the nine not learned then included Pat Berger, the groundskeeping sports turf manager since 2001 responsible for planning pristine the Razorbacks’ landscaping and grass fields, including Reynolds Razorback Stadium.

Ironic with less to carry through these hard times because of unnecessarily lavishing luxuries that Razorback Stadium’s Frank Broyles Field risks going to seed.