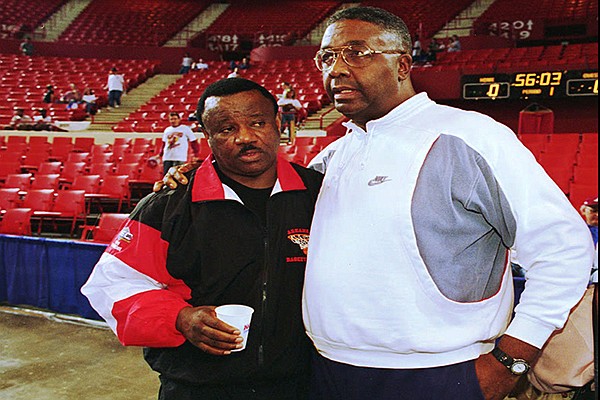 Arkansas coach Nolan Richardson (left) and Georgetown coach John Thompson are shown prior to practice Thursday, March 17, 1994, at Myriad Arena in Oklahoma City. The Razorbacks defeated the Hoyas 85-73 three days later in the second round of the NCAA Tournament.

FAYETTEVILLE – When Nolan Richardson was inducted into the Naismith Memorial Basketball Hall of Fame in 2014, John Thompson was his presenter on stage in the Springfield (Mass.) Symphony Hall.

“John had a lot to do with helping me enjoy a career in basketball,” Richardson, who won a school-record 389 games as the University of Arkansas coach highlighted by the 1994 NCAA championship, said on Monday. “That’s why I wanted him to be the guy that presented me for enshrinement into the Hall of Fame.

“When they asked me about a presenter, John immediately came to mind, because he’s the guy that helped put in my mind that I could make it there.”

“I actually talked to John 10 or 12 days ago,” Richardson said. “I was checking on him. At that time, he said he was in a rehab center.

“I really didn’t know what he was rehabbing from, but he said, ‘I’m going to be all right. Don’t worry.’ We had a good conversation.”

Richardson learned of Thompson’s death when he got a call from Andy Stoglin, his former assistant coach at Arkansas, early Monday morning.

“Andy saw on the news that John had passed away,” Richardson said. “It was a shock. I’m really going to miss John. I loved the man.”

Richardson had just led Tulsa to the 1981 NIT championship in his first season as the Golden Hurricane coach when he met Thompson at the Final Four in Philadelphia. Thompson had by that time established Georgetown as an NCAA Tournament regular.

“I had tremendous admiration for John, because at that time he was one of the few African-Americans that was a head basketball coach at a major college,” Richardson said. “Georgetown had been one of the worst schools on Earth in basketball before John took over. Then he made Georgetown a national contender.”

Richardson was a high school coach in his hometown of El Paso, Texas, then the junior-college coach at Western Texas, where he became familiar with Thompson and his Hoyas.

“Watching John’s teams play on TV really energized me,” Richardson said. “I wanted to emulate the things he did from the standpoint of his kids all playing so hard, how rough and tough they all were. They all looked like they could go get a switch off a tree limb and whup a bear with it. That’s how he trained his players, and I liked that.

“Then I saw how much his players loved him even though he was so demanding. He had a way about himself where I thought players really related to him. It was amazing.”

“There were a lot of things that added up with me and John over our careers.”

Thompson and Richardson became leaders of the Black Coaches Association in the early 1990s. They were at the forefront of battling racial issues in their sport, most notably NCAA Proposition 48, which at the time prevented high school recruits from being on scholarship if they didn’t meet minimum test scores to be academically eligible.

Thompson and Richardson were among those who believed the standardized tests were culturally biased against Black people.

“We became very close when we were trying to express that they should not be labeling kids with numbers,” Richardson said. “That really hurt me when people would say about a kid, ‘Oh, he’s a Prop 48.’ That used to just burn me up inside. We believed that if we didn’t say something and didn’t try to fight it, how sad would that have been?

“I’m so glad that I met and fell in love with John and his feelings. He did some things that made me understand that the legacy we leave isn’t how many games we won, but how many lives we touched.

“To me, that’s the reason we were successful, and I give a lot of the credit for that to Big John.”

Richardson and Thompson faced each other twice, with Arkansas going 2-0 against Georgetown.

The Razorbacks beat the Hoyas 85-73 in a second-round NCAA Tournament game in Oklahoma City en route to winning the national title. The next season, Arkansas beat Georgetown 97-79 in Memphis in the Black Coaches Association Classic.

“We were competitors, and we approached the game the same way — to beat you,” Richardson said. “You could be friends again after the game.”

Thompson visited Fayetteville before the 2003-04 season when his son, Ronny, was a Razorbacks assistant coach. Arkansas Coach Stan Heath asked John Thompson to watch practice and provide his feedback.

“It’s an honor to have him here,” Heath said at the time. “He’s a Hall of Fame coach, and we can use him as a resource to help analyze our team.

“I told Ronny I’d love to have his dad come down here and, if he had the opportunity, we’d pay for the trip. He’s going to be a consultant and give us some ideas and thoughts.”

John Thompson, inducted into the Naismith Hall of Fame in 1999, said the best part of the trip was a chance to visit his grandson.

“I like this facility,” he said of Walton Arena. “In fact, I love it.”

Thompson also visited Richardson — who had been fired as Arkansas’ coach with one game left in the 2001-02 regular season — during his trip to Fayetteville.

“Nolan is a very, very dear friend of mine,” Thompson said. “He’s somebody who I have an awful lot of respect for and is one of the most knowledgeable guys in the game. Hopefully, he’ll be in the Hall of Fame one day.”

When Richardson made it, Thompson was there to present him.