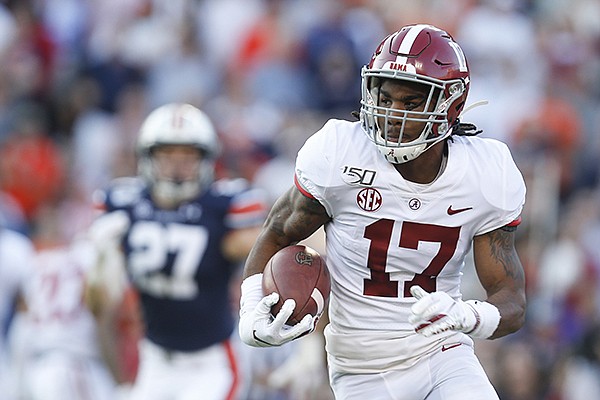 The Southeastern Conference is trying to carry its football season on amid the covid-19 pandemic while Georgia, Alabama and LSU forge ahead without their star quarterbacks.

In a precarious season when almost nothing feels normal, the SEC does feel like, well, the SEC — even without its most prominent passers. The powerhouse league approaches the delayed, shortened season with four teams ranked in the top 10.

No. 3 Alabama, No. 4 Georgia, No. 6 LSU, No. 8 Florida and others nurse championship hopes. However, the Crimson Tide must replace prolific passer Tua Tagovailoa, Georgia is without Jake Fromm and defending national champion LSU no longer has Heisman Trophy winner and No. 1 NFL draft pick Joe Burrow.

With the Big Ten and Pac-12 conferences bowing out this fall because of covid-19 concerns, that cuts the potential field of contenders for a “national” title down. But the SEC would have figured prominently on that list anyway.

And the league opted to continue working toward a season that will include just 10 SEC games with a Sept. 26 start. Alabama coach Nick Saban said that schedule under the circumstances will be good for the fans and players alike.

“I mean, I’ve been a guy that’s been wanting to play 10 SEC games for a long time, so this year we get to do that,” said Saban, whose team added games against Kentucky and Missouri. “I think it’s good for our players who get the opportunity to create value against 10 really quality opponents in our league. ”

The SEC does have seven teams in the preseason Top 25, a list that includes leagues that aren't playing. Auburn is No. 11 and Texas A&M is No. 13, with quarterbacks Bo Nix and Kellen Mond, respectively, returning. No. 25 Tennessee has 25-game starter Jarrett Guarantano back.

There's also the usual crop of elite NFL prospects hoping for another season to improve their draft stock and compete for titles.

“We’re the SEC,” Mississippi tailback Jerrion Ealy said. “We love our football and we’re going to play football no matter what.”

Not no matter what, necessarily. But if reasonably possible.

And covid-19 is a factor coaches have to take into consideration, much like a rash of injuries. So the key players might end up being second- and third-teamers pressed into action.

“I think I’m very comfortable with the fact that it’s not going to go perfect as planned,” Georgia coach Kirby Smart said. “Who can handle those adjustments?

The biggest name to opt out of the season in the SEC is LSU All-American wide receiver Ja'Marr Chase.

• Trey Smith, OL, Tennessee: All-SEC guard returned for his senior season. Has started 31 of his 32 games playing for the Volunteers.

• Dylan Moses, LB, Alabama: The leader of ‘Bama’s defense is back after missing last season with a knee injury.

• Richard LeCounte, S, Georgia: Led SEC with three fumble recoveries and had two of his four interceptions last season in the Sugar Bowl win over Baylor.

• Jamie Newman and JT Daniels, QBs, Georgia: The two former Power 5 starters — Newman at Wake Forest, Daniels at USC — are vying to replace Fromm. It’s a good problem to have since Newman was second in the ACC in total offense last season and Daniels was only the second freshman quarterback to start a USC opener two years ago. Smart said he opened preseason practices limited by the knee injury that ended his last season at USC.

• Chad Morris, OC, Auburn: Sure, Morris bombed as head coach at Arkansas, but he has a much better track record as an offensive coordinator, including a stint at Clemson. He will take over play calling duties from his boss, head coach Gus Malzahn.

ON THE HOT SEAT

This list should come with a covid caveat because the financial toll, league-only schedule and other factors besides the win-loss record could impact schools’ decisions.

• Will Muschamp, South Carolina: The Gamecocks lost their last three games, including a defeat to Appalachian State and blowout losses to Texas A&M and Clemson. They scored just nine points in those final two games.

• Derek Mason, Vanderbilt: Mason has had his successes with the Commodores, but has also won just 10 SEC games in six seasons. Vandy was 3-9 last season.