Moore’s return a plus for Vanderbilt defense 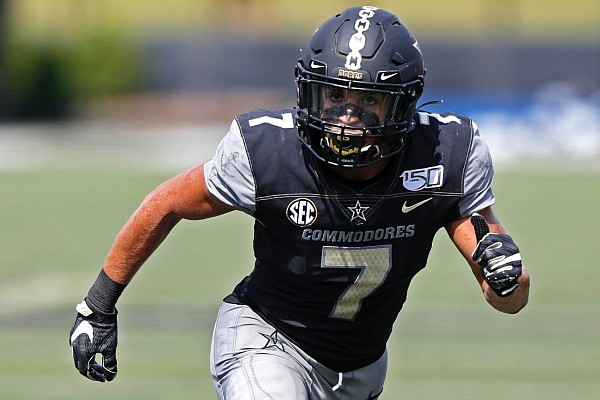 Tenth in a series previewing the 2020 SEC football season.

FAYETTEVILLE — Earlier this summer, Dimitri Moore was among the college football players who announced he was opting out of this season because of the coronavirus pandemic.

Now Moore, a junior linebacker for Vanderbilt, has opted back in.

“I look forward to returning to the program and playing this season, and I have made this decision on my own,” Moore posted on his Instagram account a week ago. “As a team, we are responsible for our actions and hold each other accountable within our environment. I have trust and confidence in Vanderbilt’s testing abilities and safety protocols.”

Moore’s decision to rejoin the team is huge news for the Commodores. He led the team with 99 tackles last season.

Two weeks before the start of training camp, Moore announced he wouldn’t play because his grandfather had died.

“After my grandfather’s passing from COVID-19, I made a decision to opt out of the upcoming football season,” Moore posted on Instagram. “Since then, I have done more research and had many conversations with doctors and medical personnel.”

Moore missed only four practices because the Commodores paused workouts for a few days after some positive coronavirus tests. When Vanderbilt resumed practice on Wednesday, Moore was on the field.

“Dimitri’s doing well,” Commodores Coach Derek Mason said Friday on a Zoom call with reporters. “It’s good to see him back on the grass.”

Mason said Moore’s initial decision to opt out was understandable in the wake of his grandfather’s death.

“His father passed away some years ago, so his grandfather was like his dad,” Mason said. “When you’re 18 to 22 years old, you’re just figuring out a wave of emotions.

“You’re talking about a football player who’s been on the field for three years,” Mason said. “He’s got experience, I think he understands the game, how fast the game is in the SEC. I think the guys around him will feed off his energy.”

After the Commodores went 3-9 last season, Mason hired new coordinators in Ted Roof on defense and Todd Fitch on offense.

“Attracting Ted Roof to join the Commodores as a defensive coordinator is a huge win for our program,” Mason said in January.

“I think they’re fast, I think they’re smart,” Mason said of the defense. “They’re playing extremely physical. It’s a loud-talking group – and that’s a sign of veteran group, when they can talk to one another.”

“Watching these quarterbacks play, I like their rhythm, their cadence, their ability to command the huddle,” Mason said last Friday. “They’ve just got to continually step on the grass and get better.”

With the loss of Ke’Shawn Vaughn, a third-round NFL Draft pick by Tampa Bay who rushed for 2,272 yards and 21 touchdowns the last two seasons, sophomore Keyon Brooks likely will take over as Vanderbilt’s top running back. Brooks had 56 carries for 252 yards last season, including 13 for 70 yards against Tennessee.

“As I look at growth, I think the offensive line is doing a heck of a job,” Mason said. “You’ve got guys getting quality reps, and I’m impressed there because physically they’re gifted.”

Mason said it was good to get back on the field after the team missed two practices with positive coronavirus tests.

“We need to make sure we just continue with our protocols and procedures,” Mason said. “We had a great summer, but now we have to be smart about our interactions and let’s make sure we take care of each other.”

SEC EAST TITLE SCENARIO Mason fired both of his coordinators after last season, the sign of a coach on the hot seat. The athletic director who gave him a vote of confidence late last season, Malcolm Turner, was fired. The Commodores’ 3-9 record was their worst since Mason’s first season in 2014 when they also finished 3-9. Mason has led Vanderbilt to two bowl games, no easy thing, but it’s just a tough place to win in the SEC.