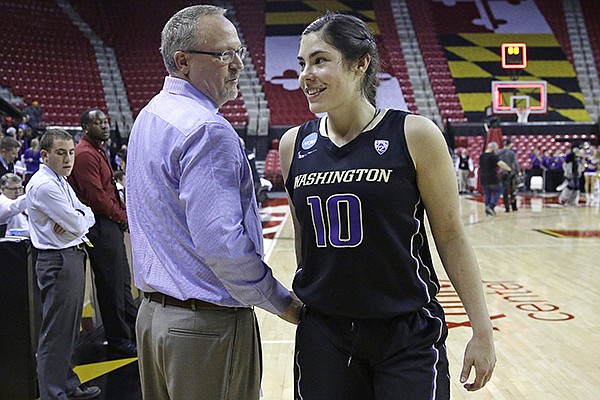 Washington head coach Mike Neighbors, left, chats with guard Kelsey Plum as she walks off the court after an NCAA college basketball game against Maryland in the second round of the NCAA tournament, Monday, March 21, 2016, in College Park, Md. (AP Photo/Patrick Semansky)

FAYETTEVILLE — Arkansas women's basketball coach Mike Neighbors has added another of his former players to his staff.

Kelsey Plum, the No. 1 overall pick in the 2017 WNBA Draft who scored an NCAA-career record 3,527 points, will serve as a graduate assistant with a focus on assisting current and future Razorbacks with professional player transition.

"As a graduate assistant, Kelsey will be responsible for preparing our players for their transition from life as Division I athletes to life as professionals, whether that will be in basketball or in another chosen career path," Neighbors said in a statement. "Using her own experiences, as well as those she’s witnessed in her career, Kelsey will give our student-athletes a rare look into the behaviors and habits of one of the best players on the planet."

Plum suffered an Achilles tendon injury while playing for the WNBA's Las Vegas Aces and had surgery in June. She has not played since the WNBA resumed play in July.

Plum will continue her WNBA career as well as prepare for the Olympics next summer, Neighbors said.

🐗 back together on the bench for the first time in five years... welcome to the Razorback family @Kelseyplum10 pic.twitter.com/VrEKCEZLtK

At Washington, Plum and Osahor compiled a 98-41 record while leading the Huskies to three NCAA Tournament appearances and the 2016 Final Four.

In addition to the career scoring record, Plum broke the NCAA record for most points scored in a season (1,109) and was named the player of the year as a senior in 2017. Neighbors was hired by Arkansas following that season.

In her first year in the WNBA, Plum made the All-Rookie team. Since, Plum has helped lead the Aces from an 8-26 record in her first season to a 21-13 finish and an appearance in the postseason last year.

She has averaged 8.9 points, 2.4 rebounds and 3.5 assists per game in just under 25 minutes the last two years.

Plum will also represent the United States in the 2021 Summer Olympics in Tokyo, where she will compete in the 3-on-3 event.

The Razorbacks have yet to announce a schedule for the 2020 season. Players have been on campus working out since July.