On Florida’s mind is top-dog Georgia

Tenth in a series previewing the 2020 SEC football season. 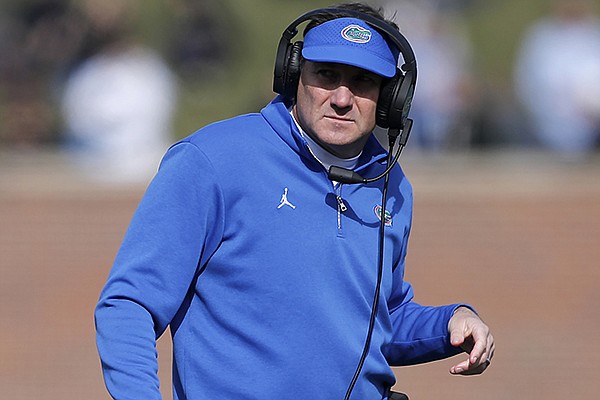 FAYETTEVILLE — Florida Coach Dan Mullen used a one-syllable grunt when asked to describe how the Gators operated in their first scrimmage of camp Friday night: Ugh.

“We have a ways to go,” Mullen said. “We haven’t played football in a while. We had missed tackles. We had too many balls on the ground, fumbling, because you’re going live football.”

Another potential factor in the sloppy scrimmaging: It had been a long day for the Gators, who put together an impromptu players’ march for social justice that day before meetings and the scrimmage.

Despite the ragged beginning, the No. 8 Gators are considered the most likely team in the SEC East to challenge Georgia’s three-year supremacy at the top of the division.

The high hopes center on Mullen’s track record — including a 21-5 record in two seasons at Florida — and a solid amount of returning starters, highlighted by senior quarterback Kyle Trask.

Given his chance in the spotlight last year after Feleipe Franks’ season-ending broken ankle in the third week, Trask completed 237 of 354 passes for 2,941 yards and 25 touchdowns, the most scoring passes at Florida since Tim Tebow under Mullen as offensive coordinator in 2008.

Franks transferred to the University of Arkansas, whom the Gators host on Nov. 14. Trask, earning a starter’s job for the first time since his freshman year in high school, is now considered one of the top quarterbacks in the country.

His work was limited in last weekend’s scrimmage, but he led touchdown drives on both of his series.

“I thought he looked really sharp,” Mullen said. “I thought he handled that situation, being on the field, thought he had great leadership, led us to a couple of touchdown drives. I was really pleased with how Kyle did out there and what we’ll be able to do with him.”

He’ll have plenty of talent to distribute the ball to, including 6-6 tight end Kyle Pitts; big-play wideouts Trevon Grimes and Kadarius Toney; and top tailbacks Dameon Pierce and Malik Davis, who has had an injury ravaged couple of years. Pitts had 54 receptions — tops in the SEC among tight ends and fourth nationally — for 649 yards and 5 touchdowns while serving as Trask’s security blanket.

The unit struggled in the run game last season. Florida averaged 129.8 rushing yards per game to rank 13th in the SEC and 107th in the FBS. However, the Gators put up 300.8 passing yards per game, 15th in the nation, which led to a total offense rank of 45th, fourth in the conference.

Mullen offenses are traditionally more balanced than that, and the Gators would like to trend toward a healthier run game.

Davis was a spark as a true freshman in 2017, filling in while tailback Jordan Scarlett served a suspension, before he suffered a knee injury against Georgia. Davis fumbled in last season’s opener and did not earn a ton of playing time. Now, he and Dameon Pierce project as the Gators’ top two backs.

“Malik Davis to me looked like the Malik Davis I saw when I got here before I became the head coach,” Mullen said Saturday. “I haven’t see that in a couple years. I’m thinking, boy, he’s really back to where he wants to be.”

On defense, the Gators bring back five starters in the base 4-2-5 coordinated by Todd Grantham.

The Gators have 49 takeaways in two years under Grantham, tied for the sixth most in the country in that span. Florida had a plus-12 turnover margin in 2018 and a plus-5 in that category last year.

The Gators were seventh nationally in scoring defense one year ago, allowing 15.5 points per game, helped by three shutouts (Tennessee-Martin, Towson and Vanderbilt). Florida had not posted three shutouts in a season since 1988.

Florida tied for ninth with 16 inceptions in 2019 and had a very sturdy red-zone defense, finishing third in opponent red-zone touchdown percentage at 40% (14 touchdowns in 35 trips).

304) should absorb a lot of blockers on the interior.

Mullen is a highly regarded coach, but his career SEC record — including nine years at Mississippi State — is 44-44, with a high-water mark of 6-2 with the Bulldogs in 2014 and with the Gators last year.

Florida and Georgia are scheduled to meet at TIAA Bank Field in Jacksonville, Fla., on Nov. 7. Georgia has won three in a row in the series and owns a 52-43-2 edge overall.

Gators at a glance

SEC EAST TITLE SCENARIO The Gators might get the luxury of a couple of warm-up games before needing to find their offensive stride, as they face Ole Miss on the road and South Carolina at home before traveling to Texas A&M on Oct.