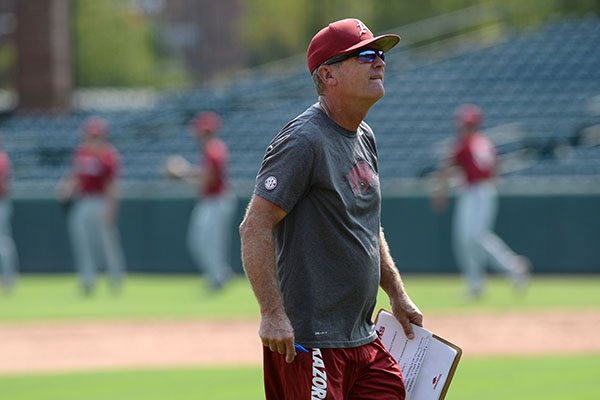 FAYETTEVILLE — During a time covid-19 quarantines have the potential to limit who can practice for days at a time, Arkansas’ baseball team has strength in numbers this fall.

The Razorbacks are scheduled to open their fall practice season Friday with 52 players on the roster, including 31 players back from the team that went 11-5 during the 2020 season that was cut short in March due to the coronavirus pandemic.

The number of total and returning players are among the highest ever for Arkansas head coach Dave Van Horn, who is entering his 19th fall season with the program. It promises to be one of the most unique practice seasons in Van Horn’s career, but he is approaching the fall with the same expectation to scrimmage as much as possible.

“We have a lot more depth than normal,” Van Horn said. “We have a good mix of older guys and younger guys. When we do get the opportunity to scrimmage — most every day we get out there to practice we will have some sort of live scrimmage — and I think the scrimmages are going to be extremely competitive this year with the types of numbers we have.

“We’re going to be short some players here and there (due to covid-19 protocols). That’s just the way things are trending, and we know that. It’ll give some guys an opportunity to play some different positions every now and then, or play more than they maybe would have. We just have to take it day to day and deal with what comes our way. We’re just excited to be out there on a baseball field with our players competing and getting better and seeing what we’ve got.”

Once they begin practicing Friday, the Razorbacks will have 45-day window to complete their fall drills. In the event of a widespread covid-19-related quarantine, the NCAA will allow teams to temporarily suspend the 45-day window for a period of time. Van Horn said that could push drills into late October or November.

Unlike past years, the Razorbacks’ fall practices will be closed to spectators this year because of the pandemic. The SEC has prohibited teams from scrimmaging against other teams during the fall like Arkansas has done the past two years.

“It’ll be different,” Van Horn said. “I feel bad fans won’t be able to come out and watch us scrimmage every now and then, or at least have that opportunity. It’s just the way it is.”

Catcher Casey Opitz and center fielder Christian Franklin are expected starters at their positions, but Van Horn and his assistants will likely be observing healthy position battles at most other spots in the field this fall.

Robert Moore, a Freshman All-America second baseman earlier this year, will split time at second base and shortstop in the fall. The Razorbacks must replace departed two-year starting shortstop Casey Martin, a third-round draft pick of the Philadelphia Phillies in June.

“It’s easier to see him playing second base all the way to the big leagues than it is short, but we’re just going to try to do what’s best for our team,” Van Horn said, “and if he makes our team better being at short, that’s great. He’s such a good second baseman — he turns the double play as well as anybody, and he may be better than anybody in the country and better than a lot of guys in the big leagues, to be honest with you — it’s hard to not have that.

“He may be our best shortstop…but as a team we may be better with him at second base, if it works out that way. We’re going to see how this goes all fall and then we’ll figure it out.”

Arkansas must also find a replacement for departed All-America right fielder Heston Kjerstad — drafted second overall by the Baltimore Orioles in June — and identify starters at first base and left field, where starters rotated during the shortened 2020 season.

Van Horn said Matt Goodheart, Brady Slavens and Cullen Smith are among the candidates at first. Goodheart, an effective two-year starter at designated hitter, was unable to play in the field earlier this year while rehabbing from a surgery on his throwing shoulder.

“Matt Goodheart wants to play first base. It’s really about his throwing arm, so we’ll see how that goes,” Van Horn said. “He’s been an incredible DH for us for a couple of years.”

Two-year starting third baseman Jacob Nesbit returns but is expected to face competition at the position, including from freshman Cayden Wallace. Nesbit might also factor in at other positions in the infield.

Most of Arkansas’ returners are pitchers. The pitching staff includes weekend SEC starters Connor Noland and Patrick Wicklander, as well as several other seasoned relievers who have been part of College World Series teams.

Freshman right hander Nate Wohlgemuth, one of the nation’s top high school recruits from Owasso, Okla., has looked good in bullpen sessions, Van Horn said, and might also play in the outfield. Wohlgemuth, Wallace and infielder Michael Brooks make up the core of the Razorbacks’ 2020 signing class that was ranked ninth nationally by Baseball America.