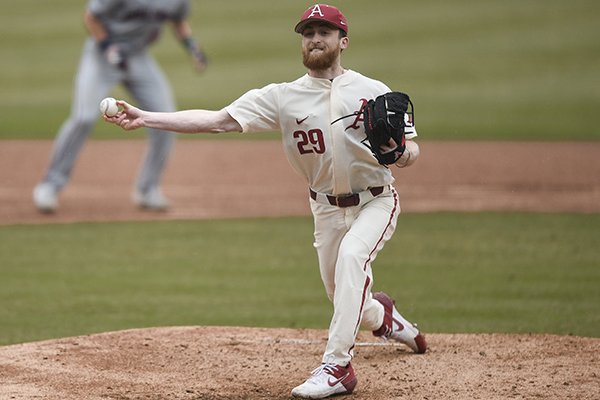 FAYETTEVILLE — Marshall Denton is exchanging his baseball cleats for turfs.

Denton, who has pitched for the Razorbacks since 2017, is a student assistant on Arkansas coach Dave Van Horn’s staff now. He will primarily assist Arkansas pitching coach Matt Hobbs and strength and conditioning coach Blaine Kinsley, and serve as the team’s bullpen coach.

“He’s already finished his (undergraduate) degree and been in the program many years,” Van Horn said. “He made that decision in the middle of the summer.”

Denton, who is from Beebe, said he began thinking about his post-playing career before the start of the 2020 season. In February he approached Hobbs about transitioning into a coaching role while he finished his master’s program in physical education. He also hopes to become certified as a strength and conditioning coach.

He had six relief appearances in the Razorbacks’ 16 games this year and recorded a 1.50 ERA in six innings. He was the winning pitcher against Gonzaga on Feb. 23 when he inherited two runners with nobody out, but struck out the side to preserve a 1-0 lead.

When the covid-19 outbreak shut down the season, Denton said he was pretty sure he wouldn’t play for the Razorbacks again.

“I called Coach Van Horn about it and basically they just left it my decision,” Denton said. “They didn’t have a problem either way. They were like, ‘If you want to come back and play, you can absolutely do that; it’s something we would want you to do. But we also understand you want to coach and you’re passionate about that.’

“I just feel like coaching is the right path for me. It’s something I’ve always loved. I’m big on leadership and that aspect turned me on to coaching.

“I’ll be 24 when the spring rolls around and long term I was thinking baseball is great and playing it has been an absolute blessing, but at some point we’re all told we can’t play the game anymore and we have to hang it up.”

In 40 career appearances, Denton recorded a 4.18 ERA in 47 1/3 innings with a unique side arm delivery. He saw his most work in 2019, a year after redshirting on the Razorbacks’ national runner-up team.

In 2019, Denton started four midweek games and appeared in 20 games as a reliever. He allowed just one run in 8 1/3 innings of conference play, and earned a save at eventual national champion Vanderbilt.

Denton is the latest in a long line of former Van Horn players who have worked with the program in a volunteer or student assistant role. As a pitcher Denton worked with former Razorback pitchers Colby Suggs, DJ Baxendale and Doug Willey.

“Those guys were good for our team and really big on keeping us upbeat and encouraged as a pitching staff,” Denton said.

Denton sees that as his role in the bullpen now, but admits it might be a little awkward with some pitchers who were his teammates for a few years.

“I just try to support them and be there for them any way I can,” Denton said. “I’m not the guy trying to be too cool for school because at the end of the day our mission is to win and get to Omaha, and I’m going to do anything I can to help them do that.”