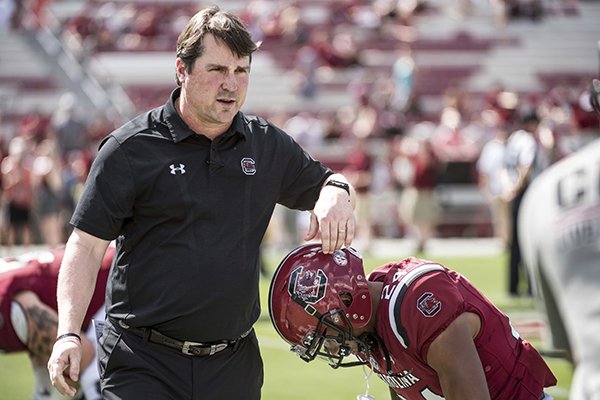 13th in a series previewing the 2020 SEC football season.

FAYETTEVILLE — No coach in the SEC enters the 2020 season with a hotter seat than South Carolina’s Will Muschamp.

The Gamecocks scored one touchdown in their final three games — losses to Appalachian State, Texas A&M and Clemson — to cap a gloomy 4-8 season. The expectation is Muschamp’s job status is in jeopardy if the Gamecocks don’t turn things in a positive direction this fall.

So it’s not a good time for South Carolina to be playing a 10-game, SEC-only schedule. The Gamecocks didn’t get crunched in the SEC’s two-game add process as Arkansas and Missouri did, as they drew Auburn and Ole Miss. Even so, with juggernaut in-state rival Clemson now off the slate, the schedule was rated the fourth-toughest in the country by Phil Steele on Wednesday.

It doesn’t project as an easy ride for Muschamp and the Gamecocks, who dealt SEC East champion Georgia its only regular-season loss last year, a shocking 20-17 verdict in overtime in Athens, Ga.

It has been an odd run in Columbia, S.C., for Muschamp, the former Georgia standout. He is the only South Carolina coach to reach a bowl game in each of his first three years, and he won more games in those seasons than Steve Spurrier did in his first three years with the Gamecocks.

Muschamp made changes on offense, demoting offensive coordinator Bryan McClendon, who subsequently took a job at Oregon, and bringing in another Georgia alum in Mike Bobo to coordinate the unit. Bobo posted a 28-35 record in five seasons as head coach at Colorado State.

The Gamecocks, who managed to get in five spring practices before the covid-19 shutdown, are eager to put a stamp on their offensive personality after averaging 5.18 yards per play, 106th in the nation.

“I told our team that that’s one of our goals this camp is to find our identity,” Bobo said. “I have an idea about what I think we’re going to become, but at the end of the day I have to let it play out in practice, and that goes back to what personnel group is most productive. You are going to see [lots of formations,] but what are we going to major in?”

Ryan Hilinski, a 6-3, 225-pound sophomore who took over after Jake Bentley was lost with a foot injury in Week 1, returns at quarterback, but there’s no guarantee he’ll retain the job. Bentley, a three-year starter at South Carolina, transferred to Utah while his father Bobby remained on the Gamecocks’ staff as tight ends coach.

Hilinski played hurt in 2019, with a sore throwing elbow the final nine games and a knee that required surgery after the season in the final six. He’ll be challenged by Colorado State grad transfer Collin Hill, who suffered his third torn knee ligament in four years during a 55-34 loss at Arkansas last September.

Both are taking heavy reps with the first couple of offenses, while dual-threat redshirt freshman Luke Doty, who is more mobile than the other two, is also in the mix.

“I thought both [Hilinski and Hill] had really good command in the huddle for what we’ve got to do to be successful,” Muschamp said after last Saturday’s initial scrimmage of camp in Williams-Brice Stadium. “I thought there were some explosive plays.

“Our defense was really good in the red zone period and our third down period. When we went to the move-the-ball period, the offense kind of took over the scrimmage.”

Muschamp was asked if he could intentionally work both Hill and Hilinksi in the first few games to see how things play out.

The Gamecocks averaged 149.7 rushing yards per game in 2019 to rank 82nd in the country and 10th in the SEC, ahead of only Arkansas, Tennessee, Florida and Vanderbilt.

Jovaughn Gwyn, Sadarius Hutcherson, Jordan Rhodes and Dylan Wonnum are all returning starters on the offensive front, which should be improved.

The top wideouts are Shi Smith, the team’s leading returner with 43 catches for 489 yards and 2 touchdowns, Josh Vann and Xavier Legette.

The group lost mainstays T.J. Brunson, Javon Kinlaw, D.J. Wonnum and others, and Jones has stepped into the leadership role.

“This is my defense,” he said in the spring. “I take pride in controlling things and making sure every day I’m coming out and giving my best effort so they can follow me by example.”

Jones had appendectomy surgery early in camp, pushing Damani Staley onto the first unit with Greene.

“Sherrod’s done a really nice job,” Muschamp said after the last scrimmage. “He really has come in and I thought he flashed today on several plays. Damani Staley has done a nice job. Both of those guys have been very consistent in camp. Sherrod’s played some consistent ball.

“Ernest suddenly has the appendix taken out and all of a sudden we switch him to the Mike linebacker. He’s never been a very vocal guy. I’ve been so proud of him and how he’s gotten really comfortable being uncomfortable.”

The Gamecocks need a notable turnaround this fall or Muschamp’s seat might become super uncomfortable.

South Carolina will have to make major strides on virtually every level to power near the top of the SEC, and it starts at quarterback, where pocket passers Hill and Hilinski are competing, with dual-threat freshman Luke Doty waiting in the wings. The Gamecocks need new offensive coordinator Bobo to work magic and enliven the run game and for the defense to take a big stride to compete in the East.