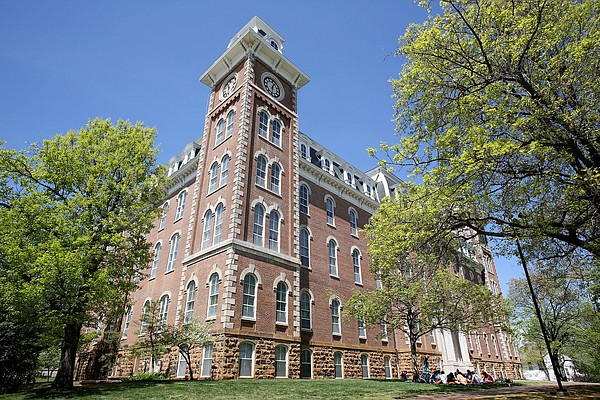 University of Arkansas students are shown on the lawn in front of Old Main on the campus in Fayetteville in this file photo.

FAYETTEVILLE — The University of Arkansas, Fayetteville is suspending non-academic events on campus beginning Saturday through Sept. 18, according to an announcement Friday.

The suspension does not affect in-person classes or activities related to intercollegiate athletics.

The university has seen an accelerating rate of increasing covid-19 cases since the end of last week, with 399 active cases reported by UA as of Wednesday.

Out of about 800 tests processed so far, about 200 have been positive for a positivity rate of 25% from the three-day drive-through testing event at the University of Arkansas, said Dr. Naveen Patil, medical director for infectious disease with the state Department of Health, during an online campus forum Friday. Results from all of the approximately 1,500 tests done over the three days will be completed as soon as today.

“Whether this might need to be extended will be evaluated over the next two weeks,” states the message from Interim Provost Charles Robinson, who is also the university’s vice chancellor for student and academic affairs.

The message to students from Robinson also stated that any reports of large parties involving 10 or more students will be treated as a violation of the university’s student conduct code.

Robinson’s message stated that “we believe that one of the largest sources of transmission among students may be off-campus social gatherings where social distancing is not observed.”

CORRECTION: The suspension is scheduled to begin Saturday, according to Friday’s announcement. An earlier version of this story gave an incorrect start date for the suspension.

This story was originally published at 1:27 p.m.