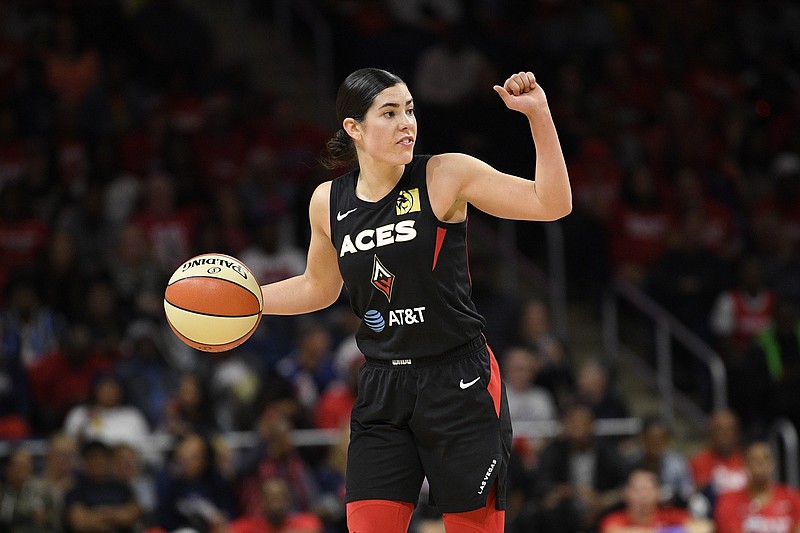 Plum, who scored an NCAA record 3,527 career points while playing for Neighbors at Washington before she became the No. 1 pick in the 2017 WNBA Draft, will serve as a graduate assistant with a focus on assisting players with the transition to a professional basketball career.

“My initial reaction was excitement,” Wolfenbarger said. “It’s a great opportunity to learn from someone that’s helped build with Coach Neighbors that I hope to build with my team at Arkansas.”

Wolfenbarger, 6-5, picked the Razorbacks over more than 30 scholarship offers from schools such as Oregon, Oregon State, Baylor, Southern Cal, Florida, Mississippi State, Texas, Miami, Notre Dame and others in April.

She and her family watched Washington, Neighbors and Plum in the NCAA Tournament.

“We watched the Final Four, and we were so pumped to see them get to compete and then just watching her lead her team and just how she played,” Wolfenbarger said. “She played with such confidence, and I think that bled over to my appreciation for her. I just started admiring her and her work ethic.”

She looks forward to being coached by Plum.

“I think there will be so much to learn from her,” she said. “Obviously, she has the experience from both levels. Get some insight as to how she became Kelsey Plum. It’s not an opportunity that everyone gets, and I want to make sure I take advantage of it.”

Guard Ysabella Fontleroy, who’s one of the top junior prospects in the nation, said Plum joining the Arkansas staff increased her interest level in the Razorbacks.

“I mean, they really didn’t need a whole lot of extra help, but I think this is just another awesome resource that they’ll have. and I think it’s just extra icing on the cake,” Fontleroy said. “Just an added bonus.”

“There’s definitely a lot of things that she has in her bag that I wish I could do,” Fontleroy said. “I’m trying to pick up some of the tricks she can do. She’s just such a versatile player, and there’s a lot of things she can do that I would love to model my game after.”

She and her parents visited Fayetteville for the Tennessee-Martin game on Dec. 29 and Texas A&M game on Jan. 2. ESPN rates her a 4-star prospect, the No. 3 guard and No. 21 overall prospect for the Class of 2022.

Razorbacks 2022 guard commitment Karley Johnson learned about Plum joining the staff when she called Neighbors on Aug. 24 to pledge to Arkansas.

“When I first found out, I was on the phone with Coach Neighbors and I had told him I would like to verbally commit, and he told me Kelsey Plum wold be joining the staff and excitement just filled my entire body just to think she would be coaching us,” Johnson said.

Johnson averaged 19 points per game as a sophomore at Newcastle High School and made The Oklahoman first team Little All-City as sophomore. Johnson calls Plum a great shooter.

“I’ve been watching her for forever,” Johnson said. “I think she’s such a great player. Having somebody coaching you that you’ve watched for a long time, I’m so excited.”