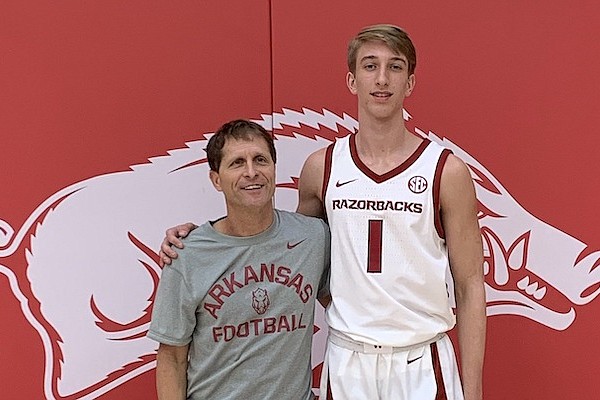 Morrilton junior small forward and Arkansas 2022 hoops recruiting target Joseph Pinion (6-6, 180) is glad to be back in school, but there has been one interesting new development.

His cell phone keeps getting calls from places such as Fayetteville, Lawrence, Kan., Durham, N.C., Norman. Okla., and Waco and Lubbock, Texas.

That’s because Pinon is one of the nation’s best 2022 basketball prospects with offers from Arkansas, Kansas, Baylor, Texas Tech, Oklahoma, Creighton, DePaul, Murray State, Ole Miss, TCU and others, as well as interest from Duke, Ohio State and Kansas State.

Blue Devils assistant Jon Scheyer has been in touch with Pinion recently to express Duke’s interest.

“I think I have handled it well,” Pinion said. “I have had a lot of calls recently, some of them during class, which have been kind of hard to take since we are in the middle of class. I want to take them, but it’s better not to.”

“I just feel like I have never been that guy to not be humble,” Pinion said. “There are still a lot of guys (ranked) ahead of me, so I just keep everything in perspective and keep working to get where they are at and above that.”

Smith is rated 42nd nationally, Ford 81st and Ware is at No. 93 to join Pinion in giving the state four top-100 players nationally, per 247.

“I believe the 2022 class in Arkansas is best class to come from Arkansas in a long time,” Pinion said. “There is so much talent in our class.”

Razorbacks basketball coach Eric Musselman and his staff have made Pinion feel extremely important in their recruiting calls.

“I really like the Arkansas staff and I talked to at least one of their coaches about every day,” Pinion said. “They are really good about keeping up with me and keeping me in the loop and telling me how much they really want me to come to Arkansas. They are recruiting me hard.”

Arkansas would obviously love to land all five.

“Arkansas coaches have done a great job in getting a lot of talent, including a lot of players from here in Arkansas,” Pinion said. “I’ve been to a few games up there and it is something special. I really enjoyed the atmosphere when they play and watching them hoop.

“I am really working on strength and just getting more athletic, jumping higher and getting faster,” Pinion continued. “I am really confident about my shooting and the basics like ballhandling.”

“Me and Nick Smith sometimes (talk) about Arkansas,” Pinion said. “He is really the only one I have talked to about it, but that would be something.”

Pinion is coming off a torn MCL that he has rehabbed. He is good to go.

“I was injured when covid just started, so I didn’t miss any basketball,” Pinion said. “By the time I got back, we were all cleared to go to the gym.”

Morrilton finished 22-11 last season and was eliminated by eventual Class 4A co-state champion Mills in the quarterfinals of the state tournament.

“We got knocked out in the quarterfinals and I didn’t even play the last 10-11 games,” Pinion said. “We only lost like one or two players, so I am really confident we should be able to make a good run at it this year.”