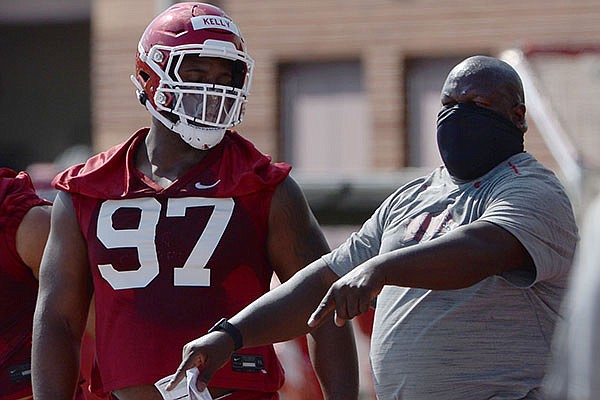 FAYETTEVILLE — Spending time in a nationally relevant program that has grown into a perennial power, Xavier Kelly understands the importance of taking care of the little things.

That is precisely what he has set out to do since arriving at Arkansas from Clemson as a graduate transfer. Coaches and teammates have taken notice of the way he operates, too, and it’s one of the reasons he has already vaulted himself into a leadership position.

Arkansas defensive coordinator Barry Odom has been particularly impressed with Kelly’s power, leverage and quickness at defensive tackle. As of now, he is projected to start in the middle of the defensive line alongside Jonathan Marshall.

“He’s done a nice job,” Odom said last week via Zoom. “He may be a little bit quicker than I thought he would be — maybe his explosion at the point of attack inside. We've been able to move him around a little bit because of his skillset. So, really excited that we have him.

“He's going to have to play a lot of good snaps for us this year.”

Kelly, who is a talented artist and has drawn personal sketches for defensive linemen Enoch Jackson and Julius Coates, and linebacker Andrew Parker, totaled 22 tackles and 2.5 tackles for loss in his three seasons on the field with Clemson.

His experience should be a plus for a defensive line group attempting to fill the void left by McTelvin Agim, who was selected by the Denver Broncos in the third round of this year’s NFL Draft. He has been a leader and done so without stepping on the toes of those returning at his position.

“I’m just leading by example,” Kelly said Tuesday. “Just doing the right things when no one is watching, you know? Right is right and wrong is wrong when nobody’s watching. I’m just taking the approach to control what I can control.”

Kelly’s quickness has stood out to defensive end Dorian Gerald. He believes Kelly and Marshall — 6-5, 311 pounds, and 6-3, 317, respectively — should be able to plug the middle of Arkansas’ front and create more havoc in the backfield than the Razorbacks have seen in recent years.

On top of that, Kelly is said to be fundamentally sound.

Dalton Wagner, who started each game at right tackle in 2019, said Kelly has proven to be a “superb” addition this offseason. His strength and ability to take on double teams has caught Wagner’s eye.

Kelly’s play has shown Wagner and other offensive linemen where their weaknesses are.

“Every day we go against each other we get better and better, especially in those double teams,” Wagner said. “We come out the next day, we fix (the problems) and he tries to find some more. It's awesome.

Kelly said he feels confident in the Razorbacks’ depth behind him and Marshall. He added the unit still has a long way to go before facing No. 4 Georgia on Sept. 26, but he is optimistic it can give offensive lines fits and be productive.

Kelly named Isaiah Nichols, Taurean Carter and Nick Fulwider as players who could make an impact at the position. Nichols is technically sound and good with his hands, and Carter has showcased strength and explosiveness.

“We have made major strides since the first day of practice,” Kelly said. “Just by watching film you can see guys getting better. We're going to get better throughout the season.

“I feel the sky is the limit for this group.”