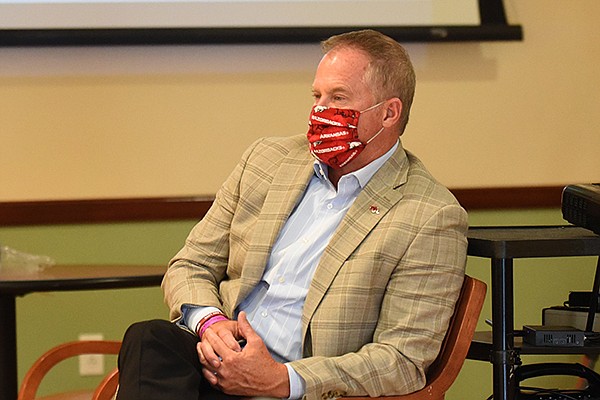 The University of Arkansas System board of trustees Tuesday approved entering into a loan agreement of up to $19.1 million that they said is to help the Razorback athletic department make payments this year and next on debt from facilities bond issues.

The loan is a way to refinance annual debt payments and is considered a part of other cost-reduction efforts taken because of the covid-19 pandemic’s effects on athletics, UA officials told the board.

Hunter Yurachek, athletic director at the University of Arkansas, Fayetteville, told board members that the department expects to see at “a minimum” a $20 million reduction in revenue from the $124.6 million originally projected for the year.

“Additional shortfalls and revenues can be anticipated if additional events are canceled or further adjustments have to be made to our venue capacity levels,” Yurachek said.

The University of Arkansas System announced the meeting just hours before it began, with the loan agreement the only item on the agenda.

The loan, with Regions Bank, is to be paid off “interest only” in the first three years, with the principal then to be paid back over five years, said Clayton Hamilton, the top finance officer for UA’s athletic department.

“The payback will coincide with a forecast for additional revenues from the Southeastern Conference,” Hamilton said.

The loan is to have a maximum interest rate of 2% annually and be paid off by Sept. 15, 2028, according to the resolution approved by the board without any opposition. The resolution says the loan’s default rate is not to exceed 4% annually.

Hamilton referred to the “very favorable” interest rate and said the loan “will not increase the total debt for the athletic department or extend the number of years for outstanding debt beyond what is currently 17 years.”

Athletics department debt at UA has increased in recent years because of various construction and renovation projects.

Taxable bonds for $90 million and tax-exempt bonds for $24,485,000 were issued in 2016 for an expansion of Donald W. Reynolds Razorback Stadium and replacement of the Frank Broyles Athletic Center. Donor gifts also helped pay for the project, which cost about $160 million.

Bond issues are also being used to help pay for several other athletics facility projects, including a $27 million baseball development center approved by trustees last year.

Total athletic department debt as of June 30 — the end of UA’s fiscal 2020 — was $163.4 million, a UA spokesman said. Future interest payments are not counted in the debt total.

Hamilton told the board Tuesday that debt payments to be paid using the loan total about $19 million.

“Most of the principal payments are scheduled for [a] Sept. 15 payment date each year,” Hamilton said in an emailed statement.

Regions Bank was selected to issue the loan after a request for proposals, or RFP, was done through PFM Financial Advisors. Hamilton, in an emailed statement, said PFM has an advisory agreement with the UA campus and UA System offices.

“Banks were provided notice through RFP that was sent out through PFM,” Hamilton said.

At the meeting Tuesday, UA Chancellor Joe Steinmetz said a proposal was sent out to 15 banks, with six responding.

The university provided to the Arkansas Democrat-Gazette a copy of the request for proposals dated Aug. 19.

The loan is considered a general obligation of the UA trustees board, with the request for proposals stating that a “Trust Indenture” is to secure the loan. The indenture was created between the trustees board and Regions Bank in 2019 with the issuance of $24.9 million in athletic facilities bonds.

Steinmetz said the pandemic in March led to the shutdown of college athletics in the spring, causing “tremendous financial pressure on our athletics program here as well as athletic programs elsewhere.” He called the loan “part of a bigger package to cut costs and make up for some of the deficits.”

Yurachek on Tuesday said the athletics department has begun with “expense reduction contingencies” that include reductions in operating, travel, recruiting and event operations budgets. He said postseason incentives have been suspended, and there are 10 vacant positions planned to go unfilled for the time being.

An annual $2.3 million transfer from athletics to support other parts of the university has been deferred, Yurachek said.

“To date there have been no furloughs and no reduction in our workforce, and we have absolutely no plans to eliminate any of our 19 sports programs,” Yurachek said.

A new football schedule in place because of the pandemic has the Razorbacks playing five home games in Fayetteville, down from seven. The university also has said attendance will be capped at between 16,000 and 17,000 in a stadium that has a capacity to seat 76,412.

Hamilton said for UA athletics it’s a “very, very fluid situation for this year and anticipated for next, as well.”