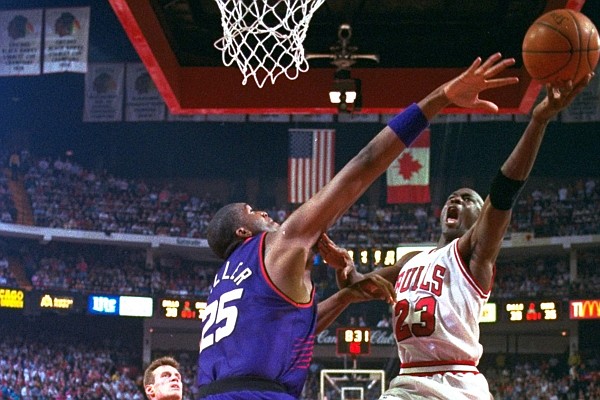 Michael Jordan of the Chicago Bulls shoots under pressure from Phoenix Suns Oliver Miller (25) in the second quarter of Game 4 of the NBA Finals, Wednesday, June 16, 1993. Jordan scored 55 as the Bulls defeated the Suns. (AP Photo/John Swart)

FAYETTEVILLE -- The Phoenix Suns went into the 1993 NBA playoffs as the No. 1 seed in the Western Conference after going 62-20 in the regular season, but found themselves down 0-2 to the Los Angeles Lakers in their best-of-five opening series.

Despite losing two games at home and heading to Los Angeles, Suns Coach Paul Westphal guaranteed his team would win the series.

Westphal also decided to start giving Oliver Miller more minutes, and the rookie center from the University of Arkansas helped make him a playoff prophet.

First in a series on the best NBA Razorbacks.

Phoenix rallied to win three games and take the series, capped by a 112-104 overtime victory in Game 5 when the 6-9 Miller had 17 points, 14 rebounds, 7 blocked shots and 3 assists in 35 minutes off the bench.

"He wasn't afraid of the moment, and he came in and made some big plays for us," Westphal said after the game.

Helping the Suns rally to beat the Lakers was a highlight of the start of what became a lengthy professional career for Miller, who is No. 10 on the Arkansas Democrat-Gazette's list of top NBA Razorbacks.

Miller, the No. 22 pick of the first round of the 1992 NBA Draft, joined a Phoenix team that featured established players such as Charles Barkley, Kevin Johnson, Danny Ainge, Dan Majerle, Tom Chambers, Mark West and Cedric Ceballos.

"Paul wasn't trusting the rookies -- me and Richard Dumas -- at that time," Miller said in a recent phone interview from his home in Phoenix. "Which is understandable, because we had a team full of veterans.

"But after we were trailing 0-2 against the Lakers, Paul finally put us in the third game. I started having a good game and he had confidence in me, and the confidence built from that point on. I started playing significant minutes."

After playing a combined 14 minutes in the first two games and missing his only shot attempt, Miller had 11 points, 8 rebounds, 4 assists and 2 blocked shots in 31 minutes in the Suns' 107-102 victory in Game 3.

Then came the decisive Game 5.

"Growing up as a kid, you always watched the NBA playoffs," Miller said. "You remember the theme music when the games come on.

"To finally be a part of it felt really great. Especially on that day. It was a Sunday and Mother's Day, and everyone was at home glued to the TV watching our game. It was pretty special, because I knew all my family was watching. At the time, my grandparents were alive, and they were able to watch it."

Miller led the Suns in overtime with nine points.

"I didn't want the season to end," Miller said. "I wasn't ready to go home yet. I was going to leave it all out there on the court."

The Suns advanced to the NBA Finals, where they lost to Michael Jordan and the Chicago Bulls 4-2 in the seven-game series.

"To be playing in the Finals my first year in the NBA, it was amazing," said Miller, who averaged 7.2 points, 5.2 rebounds, 2.5 blocked shots and 2.1 assists in 21.4 minutes in the playoffs. "I just wish we could have won the title, but playing for it was still a great feeling."

Miller played nine seasons in the NBA and also spent some time playing overseas and in the CBA.

"I loved coaching Oliver," said Walker, an All-American guard for the Razorbacks who is now coach at the University of Arkansas at Little Rock. "Oliver was a great shot blocker, he rebounded the ball and he was an unbelievable passer. He had the best hands of any big man I've ever seen, and he had a high basketball IQ.

"He knew where the double-teams were coming from and where the open guys were. He could make passes that some guards couldn't make."

Miller said that growing up in Fort Worth, his favorite player was Magic Johnson, the Lakers' star point guard.

"I used to always emulate Magic and practice passing and do all the passes he did," Miller said. "I also passed the ball a lot playing football.

"As the biggest kid in the neighborhood, I didn't want to be an offensive lineman. I wanted to play quarterback. That's how I got my ball-handling skills -- playing quarterback and playing like Magic."

"Oliver was a great teammate, a really fun guy to be around," Kleine said. "Because of the length of his arms and his big hands, he could do some things you didn't see all the time from a big man, and he could do them pretty effortlessly as far as getting rebounds out of his area, blocking shots when it didn't look like he could get to the ball, catching and making passes.

"He was a better athlete than people thought. He could handle the ball a little bit and put it on the floor for a guy his size. He was a unique player because he had a bulky build, but he was really skilled."

After playing eight seasons in the NBA, Miller played for several minor-league teams and overseas. He was playing in the CBA in Bismarck, N.D., for the Dakota Wizards when the Minnesota Timberwolves brought him back to the NBA during the 2003-04 season.

While Miller's role was limited – he averaged 2.5 points and 2.9 rebounds in 10.5 minutes – his Minnesota teammates were impressed by his play.

"He loves to pass," Timberwolves star forward Kevin Garnett told reporters at the time. "Probably one of the best-passing big men I've seen."

"People talk about Oliver as being a great passer but until you play with him and until he creates three or four easy buckets for you, it's then that you realize how great of a passer he really is," Madsen said.

The Timberwolves reached the Western Conference Finals during the 2003-04 season before losing to the Lakers.

"Oliver has meant so much to this team," Madsen said.

It was Miller's final season in the NBA, though he played in the minor leagues for a few more years, including a stint with the Arkansas Rimrockers in the ABA.

"I remember fans on the road used to ask me, 'You want a cheeseburger?' " Miller said. "I'd say, 'Yeah, hold the pickles. Give me some extra onions so I don't have to worry about talking with you because of my breath.'

"The fans didn't bother me with what they said. All that did was motivate me. My feeling was, 'Yeah, I'm a fat guy, but I'm kicking your butt on my court.' "

Miller said that when Sean Rooks, a 6-9 center who played in the NBA at the same time as Miller, died from heart disease in 2016 at age 46, it was a wake-up call that he needed to lose weight.

"When Sean died, it really hit me hard," Miller said. "So I started walking, and I started seeing results in the mirror, and I was happy with it. Each week I just pushed myself to go further and longer."

"Oliver is by far one of the smartest players I have ever coached," said Nolan Richardson, his coach at Arkansas. "He's a joke around kind of guy, but he really understands the game.

"A lot of guys play the game, but they don't really understand it. Oliver understands it. His basketball IQ is off the charts."

Todd Day and Lee Mayberry were Arkansas teammates of Miller's who also were first-round picks in the 1992 draft.

Miller was inducted into the UA Sports Hall of Honor in 2016. A year later he was honored at the SEC Tournament as the Razorbacks' legend.

"I miss everybody in Arkansas, and I thank them for the love," Miller said. "We always had great support."

Miller, 50, is retired and living comfortably with his NBA pension.

"I go to the gym and work out, play golf, go fishing," Miller said. "I do a bunch of basketball camps and spend time with my grandkids.

"My life is pretty good. I can't complain."