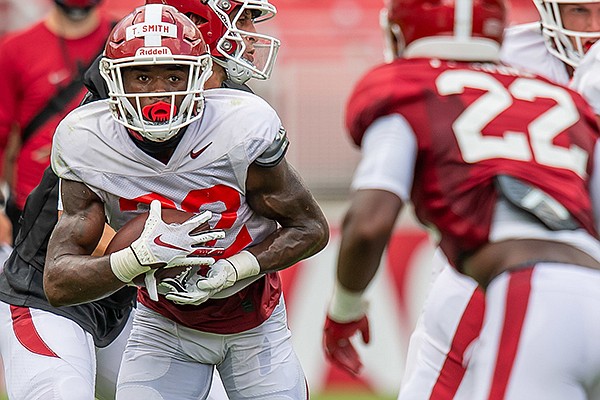 Arkansas running back Trelon Smith (22) is shown during a scrimmage Friday, Sept. 4, 2020, in Fayetteville.

FAYETTEVILLE -- Running back Trelon Smith took playing on the scout-team offense for the University of Arkansas seriously.

"Trelon brings it every day," Arkansas cornerback Montaric Brown said last season when Smith redshirted after transferring from Arizona State. "It's no question, he's got great effort every day, smile on his face.

Smith said he was determined to make the most of his redshirt season.

Smith's redshirt season behind him, the 5-9, 185-pound sophomore is ready to make an impact for the Razorbacks' offense this season.

"I'm so excited," Smith said. "I can't wait. I've been waiting for this moment for a very long time now, and it's finally here.

"I get to play with my boy Rakeem Boyd. It's going to be a big one, a huge one. I'm excited to see what we can do."

Boyd, a senior, is going into his third season as Arkansas' top running back after rushing for 734 yards in 2018 and 1,133 last season.

During Friday's closed scrimmage, Smith gained 40 yards on a pass from Feleipe Franks, and he had a 20-yard run according to highlights provided by the UA media relations department. In the first scrimmage, Smith said he broke some tackles on a touchdown run.

In limited playing time at Arizona State in 2018, Smith had 11 carries for 56 yards and 4 receptions for 22 yards.

"Ever since I got here in January, all I've seen him do is work, all the time. He's just a worker, and it's going to pay off for him.

Coach Sam Pittman said Smith gives the Razorbacks a strong 1-2 punch at running back behind Boyd.

"Trelon Smith is just a tough man," Pittman said. "He's tough on the field, he's tough off the field. That's his personality."

Smith said he grew up tough.

"Man, my 'why' is as simple as my family," Smith said when asked what motivates him. "I come from a harsh background, not having much growing up as a young kid.

"And I just keep that in mind every time I step on the field. It's bigger than me. I have people depending on me. I feel like that's truly my motivation. I do it for them."

"He just loves football," Traylor said. "When I went back and watched his high school video, it just screamed how much he loved football.

"Some kids are really good at football, they don't necessarily like football. He really loves football. When he's not out there with us, he's watching it, he's talking about it. It's just what he loves to do."

Smith said he began playing football when he was 6 years old.

"The game to me, it means everything," he said. "I'm willing to give it my all. Every play, every down.

Smith transferred to Arkansas expecting to play for Chad Morris, but Morris was fired with two games remaining last season.

Pittman was hired from Georgia, where he was the offensive line coach. Briles replaced Joe Craddock -- who recruited Smith -- and Jimmy Smith is Arkansas' new running backs coach.

"So coming in with the new coaching staff, my mindset was just keep doing what I was doing and that's just playing football. I felt like they were going to notice what I was doing on the field."

Pittman praised Smith in March before he'd seen him practice in person.

"The guy is a phenomenal effort guy," Pittman said. "He has a lot of talent. But [impressed by] just the way that he works. The way he goes about his business."

Smith said he likes how Pittman and the new staff go about their business, too.

"They talk to me every day. They call me, make sure I'm straight. They love us to death, and they're behind us one hundred percent."

Boyd, like Smith, is from Houston, and the two have become good friends. Boyd went to Stratford High School and Smith to Cypress Ridge.

"We really weren't that close when we were in Houston, but as soon as I got here, the connection, man it just grew and grew every day," Smith said. "Me and Rakeem, we are very close now.

"When I go home, he comes home with me. We go to Houston together, we travel back together."

Smith said he and Boyd also worked out together in Houston.

"Just trying to get better in each and every way," Smith said. "Just making each other better."