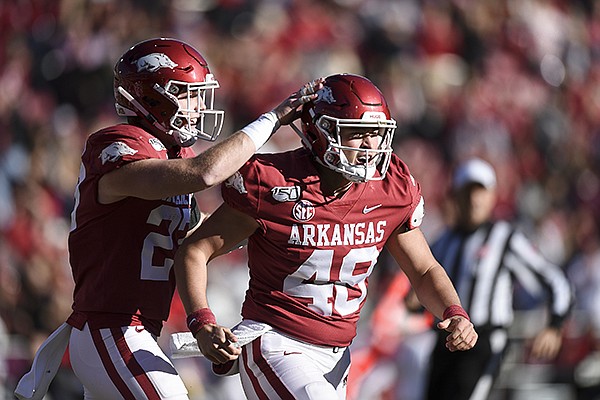 Arkansas long snapper Jordan Silver (48) reacts after recovering a fumble during a game against Mississippi State on Saturday, Nov. 2, 2019, in Fayetteville.

FAYETTEVILLE — Among fans, the long snapper might be the least-known player on a college football roster.

They prefer it that way.

After all, it seems the only time their name is called is when something goes wrong. Deliver the ball on target, on time 100 straight times and no one seems to notice, but sail a ball over the head of the punter once and the clamoring for the backup begins.

So it’s likely you don’t know Jordan Silver, or at least much about him. For two seasons Silver has been a model of consistency at his position, routinely putting the ball on the spot for Arkansas’ holders and punters.

“If I see a fan and they say, ‘Hey, are you Jordan Silver?’ I’d be shocked,” Silver said. “It’s only happened like twice.”

While it might not get the same accolades and press of other positions, the long snapper is appreciated by his teammates on the field. Connor Limpert, the departed field goal kicker who made a school-record 78.8 percent of his career field goal attempts, often credited Silver and holder Jack Lindsey with his success.

“It takes several weeks to get the motion and the timing down,” Limpert said last year of the work between the snapper, holder and kicker.

Silver has new faces behind him in those other positions this year. New special teams coordinator Scott Fountain prefers punters to be holders, meaning Reid Bauer, Sam Loy or George Caratan, a transfer from Michigan, are likely to replace Lindsey.

At kicker, Duke transfer A.J. Reed and Matthew Phillips are battling to take over for Limpert.

“There is a lot of variation and little idiosyncrasies to make sure it goes off fluidly,” Silver said. “There are certain ways the kicker wants the holder to hold."

The personnel will be different in areas, but alignments should look similar on special teams to last year despite a new coaching staff, Silver said. For instance, Fountain plans to use a shield on punt coverage.

“There will be similar looks to what we’ve done in the past,” Silver said, “but there’s a lot more tools in the tool bag now.”

Silver has worked with Brett Goode, the former Arkansas long snapper from 2003-06 who spent 10 seasons with the Green Bay Packers.

Goode, who now lives in Fort Smith, has worked with Silver for two years. After the outbreak of the covid-19 pandemic, Goode has assessed Silver’s snapping via video.

“The thing about working with someone virtually, as long as you’ve been with them before, it’s not that hard,” Goode said. “I’ve watched so much video of snappers over the years. Playing, I studied snappers, so I don’t necessarily have to be there in person. For football players, you’re used to it because you film everything and you’re in the film room.

“He knows what he’s doing and he’s been doing great. The stuff I’ve done has been very, very little. He has a good work ethic. That’s something I’ve been impressed with, and if anything, sometimes I’ve had to tell him to slow down a little bit. You don’t want to overdo certain things. He’s a great kid and I’ve enjoyed being able to work with him a little bit.”

Silver went back his hometown of Branson, Mo., during the covid-19 shutdown. He focused on his diet and worked out by using a weight rack in his parents’ basement and running the hills around the city.

Silver practiced on his own during the offseason by snapping weighted lead balls into a wall behind him. He worked with a radar gun at home and was clocked at 39 mph.

“I had a coach who teaches NFL technique to snappers who messaged me and said, ‘The Colts’ snapper’s best snap was 37, and the old Jaguars snapper snapped at 33,’” Silver said. “It kind of felt good to hear that.”

Goode said velocity is important at the position.

“Everything is done off time, so that’s what all snappers are critiqued on,” Goode said. “Obviously accuracy is there, too, but it’s all about the speed of the snap. Everybody wants .75 seconds or under (to the person receiving the snap).”

Silver longs to have some success on the field. In three years at Arkansas, he has been part of teams that were a combined 8-28 overall and 1-23 in SEC play.

His high school team in Branson never fared much better, compiling a 7-25 record in his three years there.

“It’s kind of weird,” he said. “I’ve made my way up the ladder while losing.”

Silver’s family works in real estate and moved to Branson from the Hawaiian island of Maui when he was in the first grade.

It was as a sophomore at Branson High that Silver’s father, John, suggested he try long snapping as a way to obtain a varsity football letter. He trained with his dad, watched YouTube videos on snapping and began attending summer camps for the position.

People would tell him he was good at his craft, which he said fueled his enthusiasm for the position. By his senior year, he was an honorable mention All-America by Under Armour.

Arkansas, then coached by Bret Bielema, offered him a chance to walk on for the 2017 season. He redshirted that year when starter Robert Decker was a senior. Silver has started all 24 games at the position since, totaling 112 snaps both seasons on field goals, extra points and punts.

During last year’s game against Mississippi State, Silver recovered a fumble by returner Malik Dear at the Bulldogs’ 23-yard line.

“It’s been very good to watch him grow and mature a little bit through college,” Goode said. “The biggest thing is you want to see improvements.

“Jordan had everything there, so it’s just been tweaking a few things along the way. It’s always good to have another voice when you’re trying to learn and develop. Even when I played in the NFL, even my 10th year, I was trying to learn something else. If you’re not learning, you’re not doing your job.”

Silver has also been on the field for two of the most infamous plays the past two years: when North Texas’ Keegan Brewer bluffed a fair catch on a 90-yard punt return touchdown in 2018, and when Loy threw a push pass to an Auburn defender on a poorly executed fake punt attempt last season.

“On big plays like that it kind of highlights us, which is not good,” Silver said. “It kind of shines a light on the raccoons working in the dark, you know?”

Working in the dark is much more preferable for most on special teams, especially the long snapper.