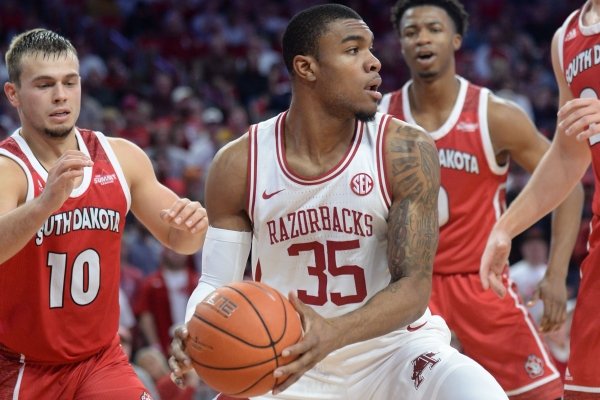 Arkansas forward Reggie Chaney (35) looks to pass out of the lane Friday, Nov. 22, 2019, as he is pressured by South Dakota guard Cody Kelley (10) and forward Tyler Hagedorn (right) during the second half of play in Bud Walton Arena in Fayetteville.

Former Arkansas forward Reggie Chaney was granted a waiver by the NCAA and will be immediately eligible at Houston.

Chaney, who played two seasons for the Razorbacks, entered the NCAA’s transfer portal in mid-June and committed to head coach Kelvin Sampson and the Cougars one week later. He will have two seasons of eligibility at Houston.

“Of all the kids we looked at, Reggie’s the one that fit us the best,” Sampson told reporters Thursday. “I’m happy for us obviously, but I’m more happy for Reggie. … Now he knows there can be a little more purpose behind his work because he knows he’s no different than his teammates now.

The Cougars finished the 2019-20 season at 23-8 overall and 13-5 in American Athletic Conference play. Houston was ranked No. 22 in the final Associated Press Top 25 poll of the season.

Chaney was a three-star prospect, according to 247 Sports, out of Findlay Prep in Nevada. He initially chose Arkansas over scholarship offers from TCU, Texas A&M, Wichita State and DePaul.

The Tulsa, Okla., native was one of two Razorbacks players to transfer from the program following last season, joining point guard Jalen Harris, who landed at Georgetown in April.