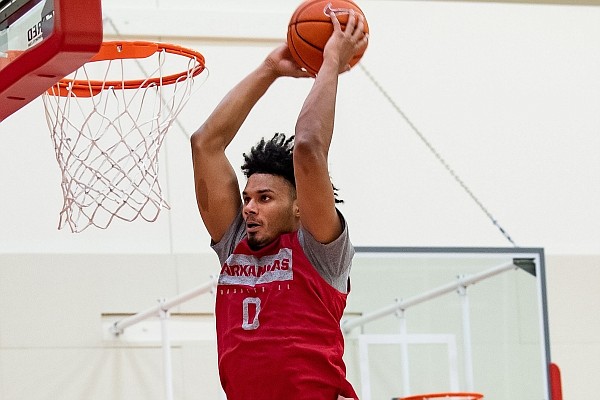 Arkansas forward Justin Smith dunks the ball during a preseason practice in the Basketball Performance Center.

FAYETTEVILLE — Justin Smith is expected to be a key piece to the puzzle for Arkansas basketball throughout the 2020-21 season.

Smith, the graduate transfer forward from Indiana, has been heralded as a high flyer — especially in transition — and a player who has grown to become a plus defender in his college career. But in his short time with second-year Arkansas coach Eric Musselman, Smith has showcased more beneficial elements of his game.

He has been a fixture in footage posted to the program’s social media accounts highlighting the top moments from preseason workouts.

Smith's impact, however, has been greater than what is advertised in those brief clips.

“He has kind of been a stabilizer for us in terms of playing hard,” Musselman said. “He’s a high, high character guy, high basketball IQ. We’re really excited to have him.”

Following the abrupt end to the college basketball season in March, Smith did all he could to remain in quality playing shape. In a Q&A on the Razorbacks’ website in early August, Smith said he ran in a field near his home when he could not find a gym.

Additionally, he noted that he worked to find consistency as a shooter and improve his offensive game when putting the ball on the floor. Described by some as a player best suited to pull the trigger 12 feet and in, Smith has worked to become a tougher cover and change that narrative.

He shot a career-low 21.9 percent on 32 attempts as a sophomore. And according to shot chart data from The Stepien, he shot 20 of 57 (35.1 percent) on midrange jumpers.

His offseason work is apparently paying dividends. Musselman has seen an uptick in his efficiency as a jump shooter since arriving on campus.

“He’s spent a lot of time on his own trying to get better from the perimeter,” Musselman said. “His confidence is growing, as well as the number of reps that he’s getting. I think he’s going to be an improved shooter from maybe what we saw in the past.”

Smith’s natural position is most likely small forward, but he is a player at 6-7, 230 pounds who can play a number of spots on the floor.

Should Musselman elect to utilize a smaller lineup, Smith could play the 4. He could also slot at off-guard for a unit that emphasizes height and length. His versatility also allows him to match up with guards and forwards defensively.

“He’s really good there,” said Alex Bozich, an Indiana basketball writer for Inside the Hall. “He can guard multiple positions. Given his size, he’s got enough athleticism and quickness to be able to guard 6-4, 6-5 guys and athletic enough to give guys his size and a little bit taller some problems, too.

“I think where Indiana is going to miss him most is defensively.”

According to Sports Reference, Smith posted a career-best 99.8 defensive rating in 2019-20. He averaged a career-high 1.3 steals per game while posting a fouls committed per 40 minutes figure of 2.7 — the lowest of his career, per KenPom analytics.

Musselman said the fact Smith led a Hoosiers team that was likely NCAA Tournament bound in minutes played speaks to his value on both ends.

“He’s a proven player in arguably one of the best conferences in college basketball,” Musselman said. “He has really good anticipation. I look at him like he's a little bit like Adrio (Bailey) in some degrees, but also like Jimmy Whitt. That's the versatility that he has.

“I think that Justin is going to take on a role defensively where he is going to have to take on a big challenge every single night that we play. Offensively … I also think there are some hidden areas to his game. We want to give him the flexibility to showcase some of those perimeter skills.”