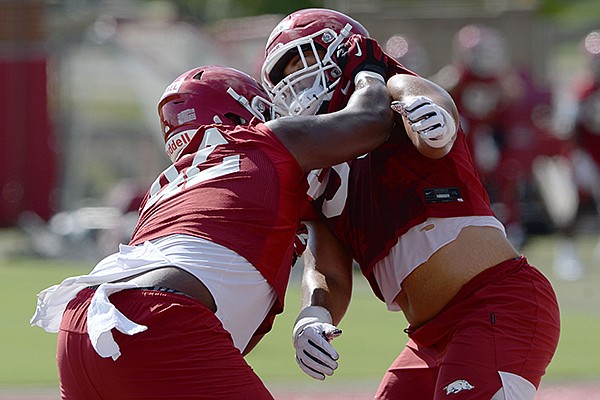 FAYETTEVILLE -- One position group clearly stands apart for its lack of experience for the University of Arkansas.

There's not a career start to be found among the interior defensive linemen on the Razorbacks' roster for new position coach Derrick LeBlanc.

While Arkansas fans have seen brief flashes from players such as Jonathan Marshall, Isaiah Nichols and Marcus Miller, their playing time was limited in 2019 behind senior stalwarts and 12-game starters McTelvin Agim and T.J. Smith.

Strangely enough, the new coaching staff doesn't view the position as a problem area. In fact, Coach Sam Pittman said it was an area that surprised him in a good way during his first few months on the job.

Defensive coordinator Barry Odom said the players on the front kept a laser-like focus during winter conditioning, the coronavirus lull and the slow buildup to training camp.

Graduate transfer Xavier Kelly, a 6-5, 311-pounder from Wichita, Kan., has helped provide the defensive tackles room with a veteran presence and the vibe of a player who has contributed to a national championship-caliber program at Clemson.

"He's done a nice job, 315 pounds and got good power, plays with leverage and he has got good quickness," Odom said. "He may be a little bit quicker than I thought he would be.

"Maybe his explosion at the point of attack inside. We've been able to move him around a little bit because of his skill set. So really excited that we have him. He's gonna have to play a lot of good snaps for us this year."

Kelly would seemingly be in line for a starting job along with Marshall, a fellow senior who has been the strongest player on the roster for several years. The sophomore Nichols; redshirt freshmen Marcus Miller, Taurean Carter and Enoch Jackson; and sophomore Nick Fulwider are the emerging backups.

Kelly was asked this week why he chose Arkansas, a program that has struggled throughout Kelly's college career.

"Why not Arkansas?" Kelly replied. "My official visit, I came and I got a chance to watch film with coach LeBlanc. He's just a very smart guy and very knowledgeable about the game. And I was like, 'That's who I want to play for.'

"Just the way he coaches, he's very technically sound. And I wanted to play under coach Odom. I got a chance to meet the guys on my official visit, and I got a good vibe."

Marshall was asked what he thought of Pittman's praise for the defensive tackles, which at the time revolved mostly around their dedication to gaining strength and knowledge of the schemes in the winter and spring.

"Right now, coach Odom's got a good thing set up for us to go, so if we just follow his game plan he has set up we'll create all those TFLs [tackles for loss], sacks and stuff more often."

Marshall's calling card as a reserve has been a few occasions when he's blown through a blocker and slammed a running back or quarterback for a loss within a couple of seconds of the snap. He accounted for 4.5 tackles for loss last season. If he can repeat that with more frequency as a starter, the Razorbacks might find a talent such as Armon Watts, who bloomed into an NFL Draft pick with a big senior year in 2018.

Marshall and Nichols are the leading returning tacklers in the position group with 17 stops each in 2019.

Nichols praised LeBlanc and the two seniors at defensive tackle after the first scrimmage of camp.

"Coach LeBlanc, he's coaching us to be tough," Nichols said. "That's how we practice and play defense."

Nichols didn't want to get into any predictions about what he'll do this season.

Kelly signed with Clemson as a consensus top 150 prospect nationally, the No. 1 recruit out of Kansas and the No. 8 defensive end in the country by 247 Sports in 2016.

After redshirting his first year as the Tigers won the College Football Playoff championship, Kelly had eight tackles in 2017 before moving to defensive tackle. He's posted nine tackles each of the past two years, including 1.5 sacks, a forced fumble and a fumble recovery as a key reserve.

He has already assumed a leadership role with the Razorbacks.

"Just leading by example, just doing the right things when no one is watching," Kelly said of his style. "Right is right and wrong is wrong when nobody's watching. Just taking the approach to control what I can control."

"Definitely Isaiah is getting better each day," he said. "He's very technically sound. He's good with his hands and he's fast.

Kelly thinks he and Marshall could make a good duo.

"He's a great D-lineman," Wagner said. "He's going to be a superb addition for us this fall. I mean the kid works hard every single play he's out there. He's really good at eating up two gaps, does really well at taking on those double teams."

"They're space eaters in there," he said. "You've got to really strain, really got to focus on your technique and your fundamentals to get those guys moved off the ball," he said. "Coach Walker has done a superb job getting them stronger, faster, more physical, and man, they're going to wreck some O-lines up this year."

Eighth in a series previewing position groups for the University of Arkansas football team.

ANALYSIS Defensive tackle play is all about tying up blockers, holding gaps, pushing the line of scrimmage back, and occasionally breaking through for pressures and sacks in the pass game. That takes strength and power, and it was a focus for the defensive tackle group in the offseason. The projected starting duo of Kelly and Marshall could be one of the stronger tandems in the SEC. Nichols, Miller and others gained weight in the offseason and should be solid reserves. The coaches know they must continue to recruit pluggers at this spot to have a chance in the SEC.