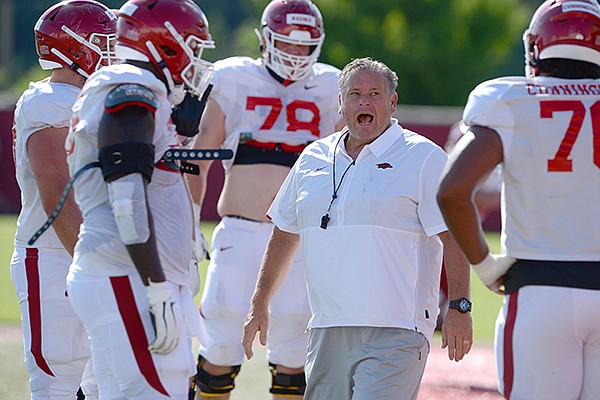 FAYETTEVILLE -- Two overriding themes have come shining through the University of Arkansas' preseason practices with two weeks remaining before the Sept. 26 season-opener against Georgia.

• Getting bigger and tougher

Of course there are other issues to deal with like getting into game shape, improving stamina, refining execution of schemes, ironing out game-day communication and all the other intricacies that go into game preparation. But for the Razorbacks, being bigger, tougher and more flexible are the points of emphasis.

Pittman's eight previous years in the SEC at Tennessee, Arkansas and Georgia have proved to him that bigger is better at almost every position on the field, as long as speed and agility are not sacrificed.

[Video not showing up above? Click here to view » https://www.youtube.com/watch?v=w1iVZuNpEzA]

"I want a big, fast guy more than I want a slim, fast guy," Pittman said on the debut of his radio show "Sam Pittman Live" on Wednesday night. "I think in this league, and if you guys are ever standing on the sideline and saw the force of a play, it's a collision sport.

"You have to have speed on your team and you have to have big people. If you can have one guy that has both of it, then you want a whole bunch of them. But that's where we needed to go on the offensive and defensive line. We needed to get big."

On the versatility front, cross training is going on like gangbusters, particularly on the offensive line, in the secondary and in the linebacking corps. Because of the threat of a covid-19 outbreak, the coaching staff wants to make sure they can go super deep at center, among cover corners, nickels and safeties, and in the linebacker spots.

Pittman said offensive line coach Brad Davis has trained up to six guys who could play center. The players known to have taken snaps there are returning starter Ty Clary, Ricky Stromberg, Luke Jones, Beaux Limmer and Shane Clenin. Pittman did not say on his radio show who the sixth person is.

[Video not showing up above? Click here to view » https://www.youtube.com/watch?v=uA4a5kjfBX4]

Pittman and coordinators Barry Odom and Kendal Briles have taken turns praising strength coach Jamil Walker and his staff for adding good weight and strength to the roster in the long offseason.

The changes in profile are particularly pronounced for a few offensive linemen, such as Myron Cunningham and Ricky Stromberg, and defensive linemen, like Jonathan Marshall, Isaiah Nichols and others.

Weight gains have been made across the board and for some players Pittman wants it to continue.

"McClellion is at corner, has got good length," Pittman said on his show. "Again, he was, I don't know if it's skinny, but he was slim. And he needed to gain some weight, and he did."

The toughness factor applies both mentally and physically, Pittman said.

"Your mind can get you through a lot of things in life, not just a football practice," he said from his seat at the Catfish Hole restaurant. "But it's hard to tell, 'Are we in good enough shape? Are we making the right calls out here? Are we lifting enough weights.' All that. Until mentally we can get tough."

Pittman said the mental toughness revolves around issues like is a player injured or is he nicked and just wants out of practice, does he have the motivation to chase the ball across the field or strain a few ounces more on a block.

Obviously, physical skills are in play across the board, but Pittman brought up the battling between his receivers and cornerbacks.

"This is a grown man's league, and you've got a corner, and he's going to hold you, and he's gonna be this far off of you," Pittman said. "We've been doing some really good work at getting off press-man, and then separation when we've got to get away from this guy.

"And we're holding, we're doing all kinds of stuff because this is a grown man's league. So we have to be as physical as our opponent, and these guys have really taken to that in coaching and done a really fine job."

The depth of rosters of football-playing schools across the country could get stressed like never before wiith the highly contagious coronavirus still lurking with the approach of fall.

Pittman said the Razorbacks underwent testing Wednesday, and the hope is the football team can keep its positive tests and quarantining due to contact tracing managed.

"Right now if you were quarantined, you're looking at a 14-day period where, we tested again today, and that takes you all the way to Georgia week," Pittman told radio show host Chuck Barrett. "You'd be out until Wednesday of that week. So the virus is certainly powerful.

"But now it's even more meaningful to our kids because it's a two-week time period out of football. Which they work their entire year, this year, to get 10 games. So I think it's starting to hit us mentally a little bit more about how we have to be better after practice."