State of the Hogs: Pittman hasn't found his quote yet 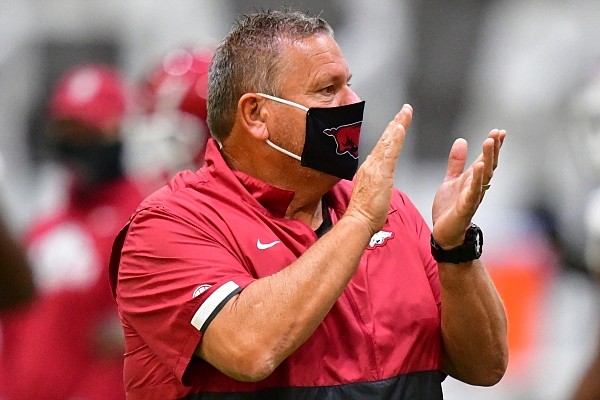 Arkansas football fans have seen the good, the bad and the ugly over most of the last two decades, but it’s hard to remember much good. Mostly, they have found not-so-kind names to describe their head coaches or recall haunting quotes.

It wouldn’t be difficult for even a casual Razorback rooter to roll through a Jeopardy! category of “Most Memorable Quote” from their football coaches of the SEC era.

Radio stations still play John L. Smith’s infamous line, “Smile!” There was nothing to smile about following an overtime loss to Louisiana-Monroe and 52-0 loss to Alabama at home.

After suffering through a series of bad Octobers, Houston Nutt borrowed a favorite Frank Broyles line, “They remember November.” Eventually, he learned that Octobers count, too, even when “you bring that wood” to Baton Rouge in late November.

By that 2007 upset of No. 1 LSU, Nutt’s detractors had decided he was nothing more than a “used car salesman” who couldn’t call plays. His staff was called the “Murray State mafia,” a reference to multiple assistants being with Nutt in his first head coaching job in Kentucky.

Bobby Petrino, blinded by the sun on a motorcycle ride, said, “Oh no, here I go,” and went into the ditch. Another often used clip, before and after his demise, “Ring the bell is delivering your best performance to date.”

And, after a victory over LSU to send Arkansas to the Sugar Bowl, Petrino described a key gamble with a line borrowed from Smith, “We didn’t come here to paint.”

Among other things, Chad Morris promised to “pop the clutch” and “put the hammer down” and into “the left lane,” then delivered a pedestrian look that seemed to be stuck in first gear.

That gets us to Sam Pittman. To this point, there are no quotes, promises or descriptions of the first-time head coach to cause concern among the fan base. There is a feeling that good things are ahead.

But, it’s hard to get in trouble when you are undefeated and no one is yet to see a full practice. There was no spring game to slice and dice.

Still, despite difficult circumstances, Pittman appears to be doing all the right things as the Razorbacks roll toward the opener with No. 4 Georgia on Sept. 26. I hear it over and over, “I think we’ve got the right coach. I like what he’s done with his staff. These are good coaches, good men.”

That’s an obvious comparison to the last few Arkansas staffs. Fans did not like the makeup of Nutt’s staffs and thought Petrino relied on the coaching tree from his alma mater, Carroll College in Montana. Older fans ache for a Frank Broyles-like staff with future head coaches.

Bielema’s first staff that featured line coaches Charlie Partridge and Pittman was respected, but confidence waned with each replacement over his last three seasons. There was little top-level experience or an ace recruiter to provide hope.

A former Arkansas player provided the most appropriate description of the Morris staff. He said, “You have the teenagers coaching the offense and the old goats on defense.” Worst of all, it was widely believed that neither side talked to the other.

To at least this point, the chemistry of the Pittman staff is superb and there is reason to believe that Pittman will enhance that bond. The head coach values their opinions, but is the clear leader. He is demonstrative and displays the proper traits for a head coach.

Players and coaches have always said the same thing about Pittman: He keeps it real.

What exactly is that? He’s genuine, unaffected by either success or setbacks. He’s the same day after day.

Those who knew him as an Arkansas assistant see no change after working with him now as a head coach. As Frank Ragnow said, “He’s the same old Sammy P, every day.”

The ability to hire coaches is probably the biggest asset for a head coach. Do the best coaches around the country want to work for you? Clearly, the answer is yes, so far.

Scott Fountain left a bird’s nest on the ground at Georgia to follow Pittman to Arkansas as special teams coordinator. They were next-door neighbors in Athens, at the end of a cul de sac. It’s telling that Fountain left Kirby Smart’s staff. The Bulldogs are the SEC East favorites; the Hogs picked for last in the SEC West.

Fountain was the Auburn special teams coach when they beat Alabama with the Kick Six in 2013. He asked Gus Malzahn to call timeout just ahead of Alabama’s field goal try to insert the punt return specialist. Fountain’s ability to impact a game should not be minimalized.

I like Pittman’s decision to tab a coach to coordinate special teams and nothing else. It’s that way at only 25 percent of the nation’s Division I schools, according to Fountain.

In the SEC, only Georgia, LSU, Ole Miss and Missouri have a special teams coordinator not assigned to another position. Smart made a curious replacement when Fountain left. He hired Alabama’s legendary strength coach, Scott Cochran, with no on-the-field experience.

Blake Gideon, the Ole Miss special teams coordinator, handled that responsibility last year at Houston where the Cougars led the nation with six blocked kicks. That will be a stat that needs to be revisited before the Rebels come to Fayetteville on Oct. 17.

By then, it may be that there is something in the Pittman era that stands out. Maybe there is proof that a highly-regarded staff is more than that.

During his first year, Danny Ford said that the SEC is a mine field of two-game losing streaks. All it takes is one for fans to put you on the hot seat. Back then, few could imagine the current UA conference losing streak, 19 games.

Joe Kines, speaking at a Razorback Club as an assistant coach, was asked in 1991 to describe what the SEC was going to be like. It was a horrific description.

“Wear a raincoat if you sit in the first row,” Kines warned. “In the SEC, they slit your throat and drink your blood.”

This column started by noting there was good, bad and ugly. There has been too much of those last two. There is a feeling that Pittman and his staff can fight their way to some good.