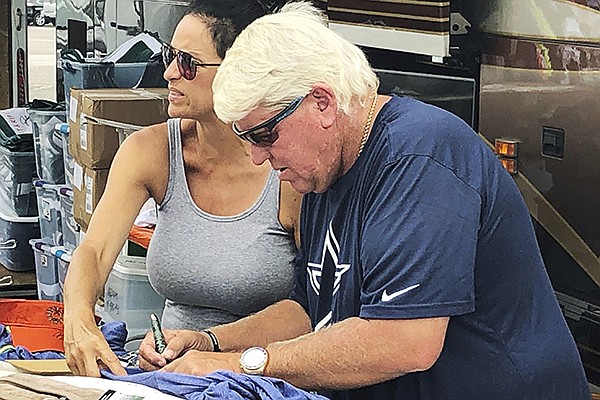 John Daly has signs autographs outside a Hooters on Washington Road during the third round for the Masters golf tournament Saturday, April 13, 2019, in Augusta, Ga. (AP Photo/Paul Newberry)

FAYETTEVILLE -- Two-time PGA major champion John Daly said in an interview with the Golf Channel that he has been diagnosed and treated for bladder cancer.

According to the report, Daly said the cancer was discovered when he had an appointment with a doctor in Little Rock because he had been passing kidney stones and occasionally throwing up blood.

"[The doctor] said the kidneys are OK, looks like you've passed a bunch, it doesn't look like any stones are in there," Daly told the Golf Channel on Thursday. "But unfortunately, you've got bladder cancer."

Daly, who is from Dardanelle and played golf at the University of Arkansas, said he underwent a procedure that removed the cancer, but was told there is an 85% chance it's going to come back. He said he has another doctor's appointment in three months.

"They'll probably have to cut it out again," Daly said. "It's probably going to come back, and then another three months. You don't know. You just don't know.

"Luckily for me they caught it early, but bladder cancer is something that ... I don't know. I don't know all the details about it. But it doesn't look like it may ever go away. So we'll just see what happens. Maybe there's a miracle there."

The cancer diagnosis didn't stop Daly, 54, from playing well on Friday in the first round of the Sanford International, a PGA Tour Champions tournament in Sioux Falls, S.D.

Daly is tied for 11th after shooting a 2-under 68 at Minnehaha Country Club. He is three strokes off the lead of 65 shot by Miguel Angel Jimenez, Dicky Price and David Toms.

The diagnosis has changed some of Daly's personal habits.

"I'm cutting way, way back on the Diet Coke and counting minutes before I can have a cigarette," Daly told the Golf Channel. "I'm trying to quit smoking. The doctors aren't saying it's too late.

Daly has won five PGA Tour titles. He burst onto the national scene when he won the 1991 PGA Championship. He won the British Open in 1995.

"I always tell people I've lived one hell of a life," Daly told the Golf Channel. "No matter what happens, I'm not scared to die or anything.

"It would have been nice to play the last seven or eight or 13 years of my career a little more healthy. But hey, I'm still working, I'm still living life, I'm still doing the things I need to do. I can accept the challenge. I'm not scared of that. I just want my kids to be OK and everyone else in my family."

"Hey All, thank you all so much for all the love, texts, msgs & support thru this!" Daly wrote. "It's all still shocking for me but know I'll do what I have in me to beat this! My whole life I've beaten the odds, so it's NOT time to stop now!"