Todd Day could light up scoreboard in NBA 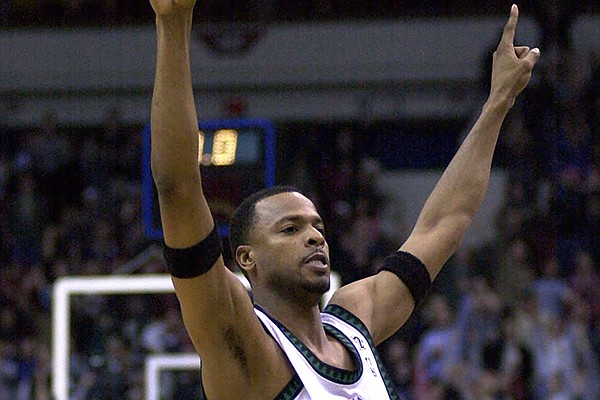 FAYETTEVILLE — After starring on four NCAA Tournament teams at the University of Arkansas, Todd Day had to wait a while before getting to be part of the NBA playoffs.

Day played in 453 NBA games, 21 CBA games and had a stint with an Italian pro team over an eight-year span before he finally made it to the playoffs with the Phoenix Suns during the 1999-2000 season.

“At that particular time, I had the longest game streak among NBA players without being in the playoffs,” Day said during a recent interview. “So it felt great to get that monkey off my back.”

Day, a 6-6 guard, made his one appearance in the playoffs count with a memorable quarter in Game 3 of the Suns’ first-round series against the defending champion San Antonio Spurs.

After playing a combined 13 minutes in the first two games of the series and scoring six points — and then going scoreless in the first three quarters of the third game — Day scored 16 points in the fourth quarter to help Phoenix overcome a 10-point deficit and win 101-94.

“That was a great moment in my career,” said Day, who is now the coach of Philander Smith College in Little Rock. “Especially being able to play such an integral part in a big win after I had hardly played in the first two games of the series.

“I knew that I was a proven scorer, but I’d never done it in the playoffs. So having a playoff game like that was really a good feeling for me, and for my family.”

Day, who had career averages of 12.3 points, 3.4 rebounds, 1.5 assists and 1.1 steals in nine seasons, is No. 6 on the Arkansas Democrat-Gazette’s list of the top NBA Razorbacks.

“Everyone can look back on their life and think of things they wish they could have done better, but as far as basketball is concerned, I have no complaints,” Day said. “I feel like I had a really good career.”

When Day was cut by the Miami Heat after playing in just five games to start the 1997-98 season, he began to wonder if he’d ever be on an NBA playoff team.

Day went overseas to play the rest of the season for a team in Pesaro, Italy. He was back playing in the United States for the 1998-99 season, but in the CBA for the La Crosse (Wis.) Bobcats.

Anfernee “Penny”Hardway, who like Day was a high school star in Memphis, helped his friend get back in the NBA after he signed with the Suns as a free agent for the 1999-2000 season.

“I worked out with Penny in the summers in Memphis,” Day said. “He had just signed his new contract with Phoenix and he asked me to come out there and play some pickup ball with the team. I went out there and played well, and they ended up signing me.”

Day averaged 6.8 points and 16.2 minutes in 58 games off the bench during the regular season, but he found himself on the court in the fourth quarter of Game 3 against the Spurs because of injuries to Jason Kidd and Rex Chapman.

“We didn’t have some of our main guys, so I was out there with Penny, and we had so much chemistry together,” Day said. “He fed me the ball, and I made a couple shots.

“Everybody knows that once I got going, I was hard to stop. That particular game, I was just feeling good.”

Day played 19 minutes and hit 4 of 9 shots, including 3 of 6 three-pointers, and 5 of 8 free throws. He also had five rebounds.

“Todd Day hit the big threes,” San Antonio guard Terry Porter said that day. “He was the X-factor. We didn’t expect him to do that.”

The Suns went on to win the series 3-1, then lost to the Los Angeles Lakers 4-1 in the next round.

“It would have been nice to keep advancing in the playoffs,” Day said. “But it was fun to win that series over San Antonio.”

Day’s Game 3 outburst against the Spurs wasn’t the biggest scoring quarter of his career.

On Dec. 22, 1995, while playing for the Boston Celtics, Day scored 24 points in the second quarter against the Minnesota Timberwolves. He finished with a career-high 41 points in leading Boston to a 114-113 victory in the Fleet Center.

Day tied the Celtics’ record for most points in a quarter, which was set by Larry Bird when he scored a franchise regular-season record 53 points — including 24 in the third period — of Boston’s 142-116 victory over the Indiana Pacers in the Boston Garden on March 30, 1983.

“Larry Bird was a legend in Boston, so tying a record he set, it meant a lot,” Day said. “Any time you could get your name mentioned with Larry Bird, that was an honor.”

“To be honest with you, I came into that game feeling frustrated because I wasn’t getting the playing time that I felt like I deserved,” Day said. “It was just one of those games where everything I put up was going in. It really felt good to be in a zone like that.”

During Day’s senior season when he averaged 22.7 points, he scored a career-high 43 in the Razorbacks’ 101-90 victory at LSU. He scored 30 or more points nine times in his Arkansas career.

“Todd was one of the best creators of his shot that I’ve ever seen,” said Nolan Richardson, who coached Day at Arkansas. “He could do things that a lot of players his size couldn’t do. He had guard skills in a small forward’s body.

“Todd was one of those guys who sometimes didn’t show in practice what he could do in a game. He was truly a gamer. Forget about what he did in practice or whether he ran hard every time or not. When that game started, Todd was 100% tuned in. You didn’t see many guys that could switch it on and switch it off like he could.”

Day said he’s thankful he and Mayberry were teammates in Milwaukee, which in their first three seasons finished 28-54, 20-62 and 34-48.

“It was a little tough for me, being a high lottery pick with a lot of expectations and going to a team that wasn’t very good,” Day said. “Especially coming from Arkansas where we hardly ever lost, losing just kind of took its toll on me.”

“It just felt like everybody in Milwaukee was so comfortable with losing,” Day said. “With me coming from a program like Arkansas where winning was demanded, it just didn’t feel good.”

“I don’t know what I would have done without Lee and his wife,” Day said. “They helped keep me grounded. We were trying to build something in Milwaukee, but unfortunately it just didn’t work out.”

Day averaged a career-high 16.0 points in his third season with the Bucks, but the next season he and Alton Lister were traded to Boston for Sherman Douglas on Nov. 27, 1995.

The Celtics had won 17 NBA titles at that time, but they were in the midst of a streak of eight consecutive losing seasons when Day joined them.

“Boston is a storied franchise,” Day said. “But when I went there, the Celtics were struggling.”

Minnesota signed Day for his final NBA season in 2001-02.

Forward Kevin Garnett, a Hall of Famer, was among the Minnesota players who guarded Day when he lit up the Timberwolves for 41 points five seasons earlier.

“When I ended up playing for the Timberwolves, I used to give Kevin a hard time about that game,” Day said. “I joked with him that he was supposed to be the defensive player of the year, but he couldn’t stop me. We had some fun with that.”

At age 34, Day joined the Arkansas Rimrockers — a new ABA team that played at Alltel Arena in North Little Rock — for the 2004-05 season after recovering from knee surgery. He helped the Rimrockers win the ABA championship and have a 32-5 record.

Playing before a season-high crowd of 14,989 at Alltel Arena, Day scored 32 points in the Rimrockers’ 118-103 victory over the Bellevue (Wash.) Blackhawks in the ABA title game.

“My career was really winding down, I was near the end, and to come back and play in Arkansas again was great,” Day said. “I felt like I still had something left to give.”

Day, 50, said he enjoys living in Little Rock with his wife, Brenda, who is an elementary school teacher. Their son, Todd Jr., is an assistant coach working with his father at Philander Smith College.

“I’m really thankful to be a coach,” Day said. “It keeps me around the game that I love.”

“My career at Arkansas went great. It was more than I could ask for,” Day said. “I was at a great university playing for a great coach and we had a lot of great players. We helped make college basketball a more uptempo game.

“We had so many highlights, but the best part had to be going to the Final Four my sophomore year. Being a part of that was big, especially when we weren’t supposed to go.

“The next year when we thought we’d be there, we didn’t make it. But my sophomore year, we had no clue that we’d make it. That’s just kind of how the game of basketball goes sometimes. A lot of unexpected things can happen.”