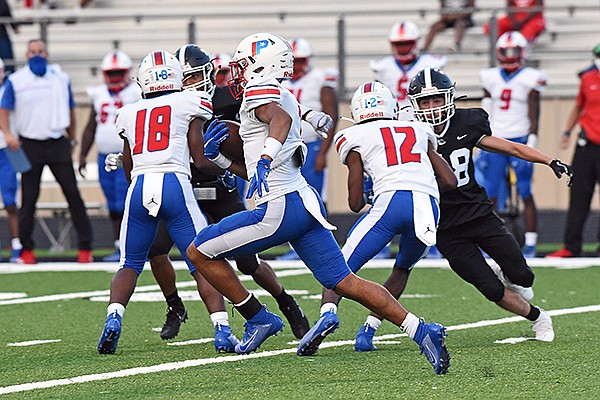 Parkview running back Willie Eackles runs 94 yards to score the first touchdown of a game against White Hall on Thursday, Sept. 11, 2020, in White Hall.

Little Rock Parkview sophomore running back Willie Eackles is the latest from the school to receive a Division I offer.

“Very fast, he’s got SEC speed, great vision, really good hands,” Bolding said. “I’ve only had a couple of younger players that would fair catch and field a punt in traffic. He’s one of them. He’s a dynamic and explosive player.”

Eackles is the fifth Parkview player from this year's team to earn a Division I offer. The Patriots feature Arkansas commitments Erin Outley and Landon Rogers along with junior running back James Jointer and linebacker Montavious Goins. Jointer has been offered by the Razorbacks and Goins has been offered by Texas Southern.

Bolding recalls when he knew Eackles had a chance to excel on the high school level.

“In eighth grade when he won the 100 meters in Little Rock and ran a 11.6 (seconds) and turned around and looked at everyone when he crossed the line,” Bolding said.

Eackles has 13 carries for 77 yards and a touchdown, and has two catches for 12 yards in two games. He also returned a kickoff 94 yards for a touchdown against White Hall.

He looks to have the versatility to play receiver and defensive back in college, but Bolding sees him at running back.

“Memphis offered him as a running back,” Bolding said. “He can do it all. He can kick, he’s our deep snapper, short snapper, kick returner and punt returner. I personally think he is a running back.”