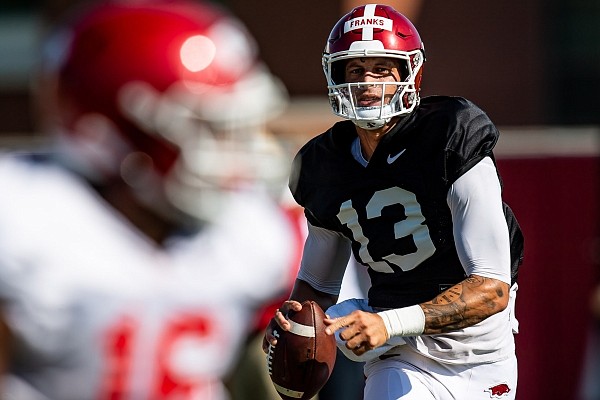 Arkansas quarterback Feleipe Franks is shown during the Razorbacks' first scrimmage of the preseason on Aug. 28, 2020.

Franks, a 6-6, 228-pounder from Crawfordsville, Fla., showed his veteran presence on the unit’s roll-out pass drills during the 15-minute media viewing window. His passes were more on target than those of younger quarterbacks Jack Lindsey, John Stephen Jones, K.J. Jefferson, Malik Hornsby and walk-on Braden Bratcher during the sequence.

• Veteran linebackers Grant Morgan and Bumper Pool were working as backups, while Andrew Parker and Levi Draper appeared to be on the first unit.

Hayden Henry and Zach Zimos got some individual work apart from the main linebacking corps with defensive coordinator Barry Odom, seeming to indicate it was the hybrid strong-side linebacker and heavy nickel spot Odom is employing for added versatility.

Zimos made an outstanding one-hand catch during drill work.

• The Razorbacks hit roughly the 2/3 mark with workout No. 16 in their plan to reach 25 practices prior to the season opener on Sept. 26. The practice was conducted in helmets and light pads.

The temperatures hovered in the low 80s on the outdoor practice fields with a bright sun and frequent breezes that made it feel like a fall afternoon.

Coach Sam Pittman structured the six-week lead-up to the season opener to have three practices the first week, four in each of the next three weeks, then five each in the final two weeks.

• The starting group of offensive linemen looked to be (left to right) Myron Cunningham, Brady Latham, Beaux Limmer, Luke Jones and Dalton Wagner. From that unit, only Cunningham has been a mainstay throughout camp at his spot, left tackle.