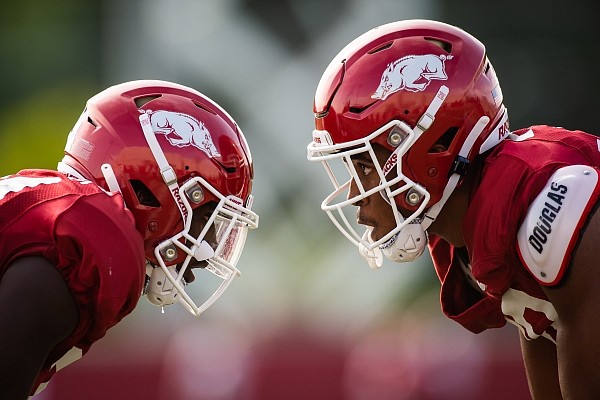 A pair of Arkansas football players ready for a play during a preseason practice on Sept. 14, 2020 in Fayetteville.

Arkansas practiced outdoors today and went in full pads. Here are a few takeaways from the 15-minute viewing period this afternoon:

• Sophomore receiver Treylon Burks made the catch of the open portion of practice. From the slot, he crossed the field heading toward the right sideline. I did not see who threw the pass, but Burks reeled the ball in with ease using only his left hand. He made a really challenging catch look almost routine. I'm always impressed with his burst and sure hands after watching him for even just a few moments.

• Staying with the receivers, Mike Woods was very vocal with his group, encouraging teammates to keep the energy and effort at a high level. I know Woods is looking to have a productive junior season and be a guy others in his room look to as a leader.

• Additionally, here is how I think the receivers stack up in terms of depth:

Karch Gardiner looked to be receiving reps behind Knox and Morris, and Kendall Catalon jumped in behind Woods and Warren.

• Here is the rundown on the offensive line groups today:

• Offensive line coach Brad Davis and Sam Pittman were really vocal with the O-linemen today. Those two appear to be really pushing this group to be ready both mentally and physically for Game 1, which is approaching quickly.

• I forgot to note this yesterday, but linebackers Zach Zimos and Hayden Henry have been working in their own group this week. I believe they were spending time with defensive coordinator Barry Odom today. Those two went through plenty of drills that emphasized ripping off of blocks.

Those two appear be the guys at a hybrid strong-side linebacker and heavy nickel spot Odom is employing for added versatility.

The remainder of the linebackers were on the far end of the turf field. I saw them working on jumping on fumbles and loose balls as well as their other daily drills.