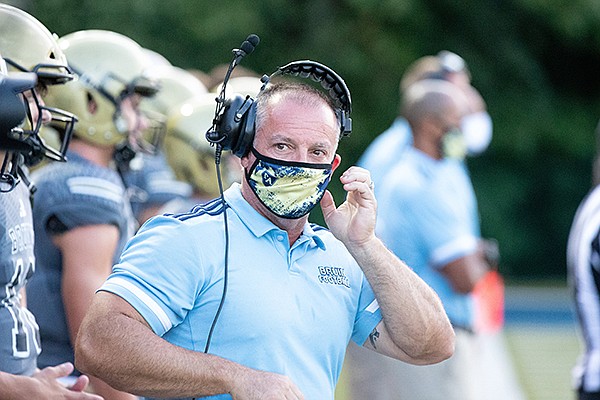 Pulaski Academy coach Kevin Kelley is shown on the sideline during a scrimmage against Bryant on Tuesday, Aug. 18, 2020, in Little Rock.

It’s unlikely high school fans in Arkansas will see more high profile talent in one night than at Pulaski Academy and Bryant on Friday night.

The Bruins will host Life Christian Academy of Chester, Va., while the Hornets will host Cedar Hill (Texas) Trinity Christian.

Life Christian features 10 prospects with Power 5 scholarship offers and others with Division I offers. Tennessee linebacker commitment Aaron Willis headlines the Eagles defense along with junior linebacker Gene Townsel Jr. who has a Maryland offer.

Pulaski Academy was to play Shreveport Evangel, but Louisiana only recently decided schools would start their season on Oct. 8. The Bruins worked with a company to find a replacement.

“When we signed the contract I didn’t know they had that many,” said Pulaski Academy Coach Kevin Kelley of the Eagles’ Power 5 prospects. “I heard they had some good guys but they needed a game and we needed a game because of covid. We knew they would be good and we want good because it gets us ready for the playoffs.”

Life Christian’s offensive line is led by juniors Desaun Williams, 6-4, 290 pounds, and Trevyon Green, 6-7, 380, along with sophomore Josh Miller, 6-5, 315. Williams has offers from the University of Arkansas, Baylor, Boston College and others, while Green has Maryland, Virginia Tech and other offers. Miller’s offers include Penn St. and Nebraska.

Junior quarterback Naquari Rogers has offers from Baylor and Pittsburgh. Life Christian and Trinity Christian will give fans in the state a chance to see numerous high profile prospects on each team.

“I think sometimes we think our kids are Power 5 guys until you see them standing next to some of those guys and you’re like, ‘OK, that’s really what they physically look like’,” Kelley said. “Some of the offensive linemen look like big time players to me. Their linebackers look really amazing. They’re very large human beings and they’re fast. The quarterback looks really athletic.”

Ravenwood had a reportedly seven prospects with Power 5 offers, including Jake Briningstool, ESPN’s No. 1 tight end for the 2021 class and Michigan linebacker commitment Junior Colson.

“Then you look at these guys this week, I would say the first weeks of play I would beg to say not many teams have faced that many guys with Division I offers,” Kelley said.

Bryant will take on Trinity Christian, which also has it’s share of talent.

Senior quarterback Shedeur Sanders, who committed to Florida Atlantic, is an ESPN 4-star prospect, the No. 8 pocket-passer and No. 40 overall prospect in the nation. His father, former Florida State and NFL cornerback great Deion Sanders, is the team’s offensive coordinator.

Sanders also has offers from Alabama, Baylor, Florida and Georgia.

“He can spin it,” Coach Andre Hart said. “He’s the overall leader of the offense.”

The Tigers will line up with receivers Jordan Williams, an Indiana pledge and Robert Williams, who’s committed to Louisiana-Lafayette.

Trinity Christian’s offensive line is massive and headlined by Shadez Taylor 6-4, 355. He has offers from South Alabama, Jackson State and Alcorn State.

“He gets the juices going for the offensive line,” Hart said. “He brings that physicality.”

Hart is bullish on his safeties Marvin Martin and Cam’Ron Silmon, a Florida Atlantic commitment.

“Marvin is a little bit bigger,” Hart said. “He just got an offer from Boston College.