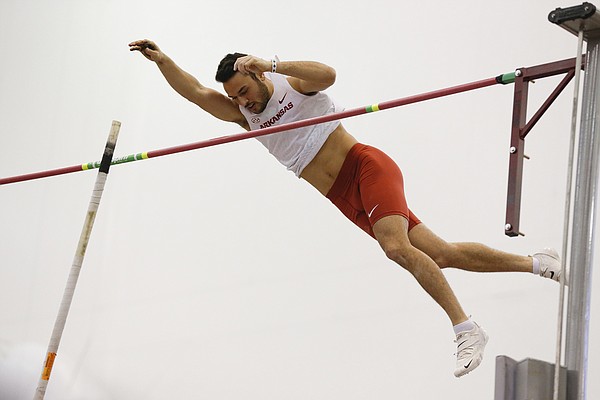 It is appropriate that Arkansas track and field athlete Etamar Bhastekar competes in the heptathlon.

The men's heptathlon is a seven-event competition that ranges from sprints and high jump to hurdles and pole vaulting, and requires versatility. Bhastekar, a basketball player-turned-pole vaulter who served in the Israeli army and teaches children in his spare time, is nothing if not versatile.

In March, the Razorbacks' track and field team was preparing to compete for a national championship at the NCAA indoor meet. With teams already in Albuquerque, N.M., the meet was canceled the day before it was scheduled to begin because of the covid-19 outbreak.

With classes moving online and facilities closed, the staff sent track and field athletes home. For Bhastekar, that meant a plane ride back to Israel.

With his season cut short, he could have been bitter, but he instead used his time back home to better others.

"This summer I was actually a replacement teacher in a boarding school," Bhastekar said. "It's just awesome how you can influence teens."

It was the best of times because Bhastekar could see his students begin to understand the material. His students, who mainly came from disadvantaged backgrounds, began to see how events in the 1700s could still apply to them today.

"I can see it in their eyes that they can relate situations to what's happening in today's world," Bhastekar said. "It really filled my heart to see them gaining some valuable education."

It was the worst of times as well because of the pandemic. While basically everything was shut down in Israel, Bhastekar had to get creative with his training.

"I talked with him one time and he said that he'd been doing stuff on the beach," Arkansas assistant coach Mario Sategna said. "I thought, 'Man, that's great.' You just kind of learn to figure some stuff out."

Bhastekar's boarding school classroom wasn't the first time he earned the teacher title. That came a few years earlier while he was enlisted in the Israeli military.

"In the beginning, I was a soldier teacher," Bhastekar said. "I would kind of help communities understand what the army was for, and help some poor communities with just being there for them."

Israeli law requires men and women to serve in the military once they are 18 years old. Bhastekar served as a teacher for one year, before his athletic travels interfered with his service.

"Along with my army service I was also an athlete," Bhastekar said. "I was flying to Europe a lot for competitions and training camps. When I did that I couldn't be a teacher anymore."

Instead of teaching, Bhastekar worked to keep the facilities and people in order.

"In the army, there is a commander who needs to make sure that the bedroom looks fine, that everybody is dressing appropriately," he said, "so I worked under him."

Bhastekar had goals he wanted to achieve in the military and in athletics. Both of his parents were in the Israeli air force, and his brother was a member of an elite unit of soldiers within the Israeli military. But as his pole vaulting competitions began to increase in frequency and distance away from Israel, Bhastekar knew he had to choose.

Track and field, or the military?

"The social aspect (of the military), it's amazing," Bhastekar said. "I mean, you are with your unit of 12 to 15 people, you are like brothers to each other and you will be friends for life.

"But (the) army in the end is just holding guns and fighting. The bottom line is it's about fighting. And I didn't want to have my career based on fighting or using weapons. Sports is all about connecting. I thought it was more beautiful and just more valuable. I don't need to base my life in the future in saying, 'Yeah, I got paid a lot of money, or I got to do very valuable things for my country, but it happened through war and didn't happen through sports and culture.'"

Since deciding to pursue his pole vaulting dream, Bhastekar has competed all around the globe. He placed in competitions in the Balkan countries, in South Korea and even in Olympic festivals.

With all this success, it would seem like Bhastekar grew up pole vaulting, but he didn't even know what it was until his basketball coach wanted to improve his speed.

Growing up in the small desert town of Mitzpe Ramon, he was introduced to basketball through a professional team in Tel-Aviv. Maccabi Tel-Aviv opened a basketball class in his hometown so it could find young athletes who could potentially play for the club in the future.

"I was going to training camp with this team three times a year and basically keeping in touch," Bhastekar said. "When my parents got divorced, I moved to my current place. It's very close to Tel-Aviv, and finally I achieved my goal to be on this team, to be on Maccabi Tel-Aviv."

Bhastekar made the team when he was 13, but his basketball coach wanted him to get faster.

Bhastekar tried it and liked it. He was then faced with a decision. Should he abandon his 10-year dream to be on the Maccabi Tel-Aviv basketball team for something he just discovered?

"I went with my gut, and I did pole vaulting and it paid off," Bhastekar said.

For basketball practices, he would spend roughly six hours a week at practice, but for track and field practice, Bhastekar was required to meet at the facility every day for at least three hours.

"I was living kind of far from my facility, so I needed to take two buses," he said. "Every direction is an hour and a half long, so it was really overwhelming to come to workouts.

"I also had to go to school and do my homework, so everything together was really overwhelming."

With essentially all of his free time taken up by practice, Bhastekar made a vow to himself: Set a national record or take track and field less seriously.

"I told myself, 'All right, if you break the national record you're taking track and field seriously. If you're not, then have fun,'" he said. "So I decided to work out hard and I broke it."

Bhastekar was the 2016 Israeli national champion in the pole vault while holding records in the under-16 and under-18 decathlon.

After his army service, Bhastekar knew he wanted to attend college in the U.S., so he he started sending emails. After hearing back from a number of schools and receiving a few offers, Bhastekar decided to attend the University of Texas-El Paso.

The adjustment from Israel to El Paso was jarring at first.

"First of all, the food," he said. "The food is way, way, way different. To find healthy food isn't very hard in Israel and that was something that I needed to get used to."

He also quickly realized the culture in the border town of El Paso is quite different than what he expected.

"The first day (in El Paso), I woke up and I was like, 'Oh yeah, I need to go and eat something,''' Bhastekar said. "I didn't know any restaurants or anything, so I asked a lady in the street if there was a McDonald's or someplace to eat breakfast.

"And she asked, 'En Espanol?' I don't understand. I came to the U.S., you don't speak English?'" Then I realized that a majority of people in El Paso are Hispanic.

"It took me a second to understand the dynamics in the city, but I'm glad that I went there because I not only saw the English U.S., I also saw the Hispanic U.S. in Texas. I'm glad I had that opportunity."

After almost two years at UTEP, Bhastekar decided he wanted to look for a different school, and he put his name in the NCAA's transfer portal. He didn't know where he would land, but he had heard great things about Arkansas.

Sategna reached out to Bhastekar through the portal and sold him on coming to Fayetteville.

"One of the big things that he felt like he was missing there at UTEP was that he was just pole vaulting and that was it," Sategna said. "He was kind of missing out on that all-around training. He felt like that was kind of holding him back. And I'm like, 'Well, shoot, man, we've got you covered on that.' I've always taken pride in having the multi eventers."

After competing in his first full season as a heptathlete, Bhastekar finished seventh at the SEC Indoor Championships. Sategna praised Bhastekar for his ability to adapt last season.

"Whenever you have people that are transferring that have already been in a collegiate system, it's very hard for them sometimes — especially in the technical events — to really pick up on things right away," Sategna said. "I felt like he did a great job with that this year."

With a year of SEC competition under his belt, Sategna expects Bhastekar to "lead the charge" next year in the pole vault as well as compete for points in the heptathlon.

Like so many other milestones in his life, Bhastekar has a goal to reach the Olympics, but it's not the only reason why he still competes in track and field.

When his track and field career is over, he wants to get a masters degree in education or economics and eventually return to Israel. He is interested in the work World Bank is doing in underdeveloped countries.

"I just found it really awesome to be able to build a project that could enhance a country's economic system and make them make more money," he said. "And make them have better care for their people. The World Bank is doing that."

When talking about his future, Bhastekar compared it to a saying he heard in Israel.

"You cross the forest by passing each tree," he said. "I don't know yet what will happen in the future, but I need to pass each tree and see from there."

That response perfectly fits Bhastekar. A man so versatile should not have to pick his future right now.