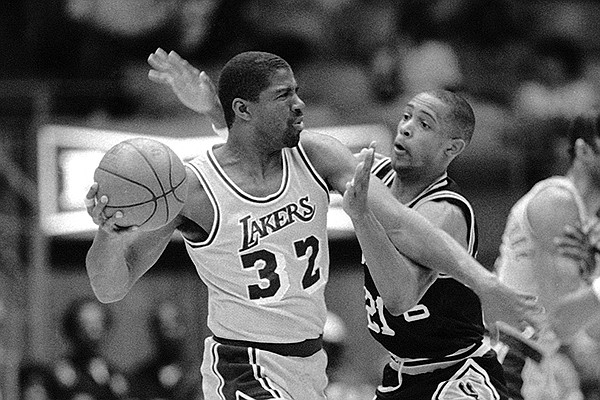 FAYETTEVILLE — On the basketball court, Alvin Robertson was an All-American guard at the University of Arkansas and four-time NBA All-Star for the San Antonio Spurs and Milwaukee Bucks.

Off the court, Robertson has been arrested 17 times — first in 1990, and most recently in 2018 — and charged with offenses including assault, burglary, criminal trespassing, resisting arrest and violating parole.

It makes for a complicated legacy.

“Whatever Alvin has done off the court, that has nothing to do with Alvin the basketball player in Arkansas history and what he was as an NBA player,” said Darrell Walker, who was Robertson’s teammate with the Razorbacks and played against him in the NBA. “Those are two different things.

“You’ve got to understand, nobody’s perfect. If you opened up everybody’s closet and pulled out all their stuff, you’re going to find something that makes you go, ‘Oh boy! Wow! I didn’t know that.’ “

Walker said Robertson has good qualities that tend to get overlooked because of his legal issues.

“I know Alvin is a giving person,” Walker said. “I know he’s given money to a lot of people trying to help them. Look, man, we’ve all done some crazy things in life. Is Alvin regretful he did some of those things? Absolutely.

“Alvin was a great player, and I don’t believe he’s a bad guy. I think he’s somebody that made some mistakes.”

Robertson, who couldn’t be reached for comment for this story, is No. 3 on the Arkansas Democrat-Gazette’s list of top NBA Razorbacks based on his accomplishments as a player.

“Alvin was strong, athletic,” said Joe Kleine, an All-Southwest Conference center who was Robertson’s teammate at Arkansas and played 15 seasons in the NBA. “He could go all day. I never saw him tired. Never. He was just an athletic machine.

“It was amazing how hard he could play. He wasn’t afraid of anybody, and he could whip anybody’s a in the NBA to this day.”

Robertson endured a six-year legal nightmare that began in 2010 when he was accused of being part of a kidnapping ring, and charged with sexual assault of a child and trafficking an underage child for purposes of sex.

At the time of Robertson’s arrest, he was in Bentonville having just made a sales pitch to Walmart for a basketball instructional video. Then he was supposed to conduct a basketball clinic for youngsters.

The deal with Walmart was quickly canceled, Robertson later told the San Antonio Express-News, as a result of his arrest.

When the case finally came to trial in 2015 after a series of suits and countersuits, Robertson was acquitted of all charges. The girl who originally made the accusations against him admitted she lied.

“It ruined me,” Robertson told the Express-News after the hearing. “I lost everything.”

Robertson had become a successful building contractor after retiring from the NBA, but the business went bankrupt.

“When I saw a report that Alvin was trafficking girls, I was stunned,” Walker said. “I couldn’t believe it. Alvin told me at the time the sex trafficking stuff wasn’t true, and I believed him. It was a trumped up charge.

“But when you’re a famous athlete, a lot of people hear about the arrest, but then later they don’t hear that the charges were dropped. That really hurt Alvin big time.”

Robertson addressed his legal issues in an interview with Bleacher Report in 2014 as he waited for the resolution of the human trafficking case.

“I made some mistakes,” Robertson told writer Shaun Powell. “Some of the things I did, I was held accountable for and served my time for them.

“But some of the things said about me were untrue and shouldn’t have been allowed to be a part of my case. And when you’re on probation, there are people who can place a call and you’re not going to get the benefit of the doubt. Once you’re in a negative position, you’re automatically going to be judged. You don’t have a chance.”

Robertson repeatedly professed his innocence before the charges were dismissed.

“It’s disappointing the way things have gone,” he said in the Bleacher Report article. “I’m totally innocent. But how do you fight accusations?

“I’ve been on house arrest three years. I can only leave to see attorneys or for doctors’ appointments. I’m not allowed to be around minors. Why are they treating me as though I’ve done something wrong? I should be proven guilty in court first before all of these stipulations are placed on me.”

In other cases, Robertson demonstrated self-destructive behavior and struggled to control his temper. Some of the people he associated with at strip clubs — one of which was the source of the false sex trafficking accusation – also didn’t help him.

“You’ve just got to be careful about who you hang out with, because that can give people an impression of who you are. You’ve got to be careful, because when they go down you’ll go down, or they’ll try to take you down with them. That’s what happened to Alvin.”

The Express-News reported Robertson’s latest arrest in 2018 was the result of an argument with a relative. Police answering the call arrested him for an outstanding warrant for previously violating a protective order.

“Alvin was good people,” Frank Brickowski, a Robertson teammate with the Spurs and Bucks, told Bleacher Report in 2014. “Some people might not say that about Alvin, but he’s good at heart.

“He just couldn’t control his temper. He grew up hard and couldn’t help himself in certain situations.”

Robertson first was arrested in 1990 when his then-wife Jackie called police. He agreed to undergo therapy for spousal abuse, according to media reports. His wife later testified on Robertson’s behalf at a hearing. The Express-News reported she attributed his behavior to “dysfunctional circumstances.” She added, “He is a good person. Sometimes good people act in a bad way.”

According to Robertson’s Facebook page, he is living in San Antonio. There is no information about what he’s doing now.

Walker, coach at the University of Arkansas at Little Rock, said Robertson has taken part in some text threads with other former UA teammates in the past couple of years.

“When Alvin would join the group texts with us, everybody was really glad to hear from him,” Walker said. “I’ve kind of lost track of him again recently, but as far as I know he’s healthy and doing fine.”

Robertson was a first-round pick and No. 7 overall by the Spurs in the 1984 NBA Draft.

In Robertson’s second season he averaged 17.0 points, 6.3 rebounds, 5.5 assists and an NBA-leading 3.7 steals, and he won the league’s inaugural Most Improved Player Award. He also won the Defensive Player of the Year Award and made the first of three consecutive All-Star Game appearances.

Robertson is one of four NBA players — and the only guard — to record a quadruple-double. He had 20 points, 11 rebounds, 10 assists and 10 steals for the Spurs against the Phoenix Suns on Feb. 18, 1986. Robertson is the only NBA player to accomplish the feat with steals rather than blocked shots.

“I’m proud of the career I had,” Robertson said in the 2014 Bleacher Report article. “Fortunately, I’ve had some accomplishments that made the record book, and they can’t take them out. The steals. The quadruple-double. They can’t take that away from me.”

Sidney Moncrief, an Arkansas All-American guard, played against Robertson in the NBA.

“Alvin’s steals were legitimate,” Moncrief said. “He didn’t get them because he wasn’t guarding his man and would knock the ball away from someone else. He was taking the ball from guys.

“He was relentless. I really admired how he played.”

“If Alvin had stayed healthy, he could have been a Hall of Fame player,” Walker said. “That’s how good he was. He was an unbelievable player. He could affect the game by not scoring, just by his defensive prowess.”

According to Bleacher Report, Indiana Pacers guard Reggie Miller recalled being warned as a rookie by a teammate not to say anything to Robertson that might upset him. No trash talking, Miller was told, don’t even say hello.

“Alvin terrorized a lot of guys he guarded in the backcourt,” Walker said. “He was one of the most feared competitors in NBA history. No one was going to mess with Alvin Robertson.”

Robertson and Walker — the No. 12 overall pick in the 1983 NBA Draft — were Arkansas teammates for two seasons and helped the Razorbacks go a combined 49-10 in that span. During the 1982-83 season, they combined to average 32.4 points for Coach Eddie Sutton in an era before the three-point shot and shot clock.

“Alvin and I formed one of the best backcourts, in my opinion, ever in college basketball,” Walker said. “Coach Sutton said there may be individual guards better than us, but there weren’t going to be two guards playing together at the same time better than us.”

Walker said it pains him that Robertson now largely seems forgotten as a star player for Arkansas and in the NBA. He said he hopes one day Robertson can be honored by the UA for his accomplishments.