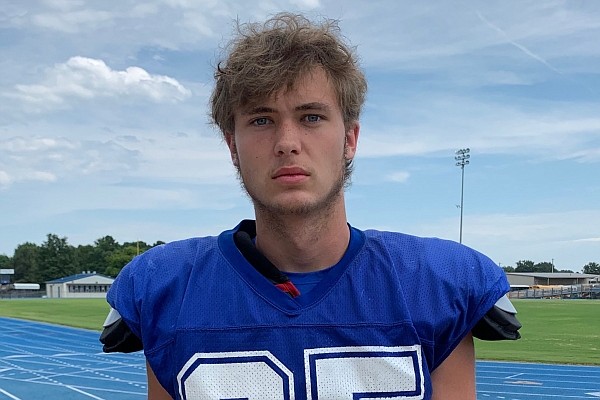 FAYETTEVILLE — After leading Dewitt to a 7-5 season, qualifying for the state playoffs for the first time in 20 years and winning its first postseason game in 40 years, Dragons head coach Mark Courtney knew his young 2020 team would likely have its ups and downs.

The father of 2022 Arkansas tight end commit Dax Courtney (6-6, 212) has already experienced both with a 36-6 road loss to McGehee in the season opener and a 46-6 home win over Drew Central on Friday.

“Man, my team is young,” Mark Courtney said. “I have nine new faces on offense and about the same on defense, so it is not surprising. We should get better every week and that is what you hope for as a coach.

“The good thing is that I don’t lose many of them for next year. We have a lot of 10th and 11th graders. It is just kind of coming together. We have a big test this week, but I think we will continue to improve.”

Dax Courtney, one of three Arkansas junior pledges, is having a strong start to the season with 11 catches for over 160 yards and three touchdowns.

Those came after a sophomore season in which he had 36 catches for 623 yards and seven touchdowns while averaging 17.3 yards per reception.

“I think he is very comfortable with his decision and has not wavered on it,” Mark Courtney said. “Again we have two years before he gets there, but I kind of thought it was a no-brainer from the start and he is excited about it.”

A three-star prospect and the No. 22 tight end nationally in the 2022 class by 247 Sports, Dax Courtney is doing his part to help the Razorbacks coaches recruit.

“I know he stays in touch with a lot of the other 2022 recruits that Arkansas is after and is encouraging them and pushing them to go ahead and make their decisions, too, as well as some of the class of 2021 guys,” Mark Courtney said.

“They are all building really good rapport with each other and it is a pretty neat little situation.”